Angela Dorothea Merkel is a German politician. She has been serving as the Chancellor of Germany since 2005, the first woman to hold this office. She also served as the Leader of the Christian Democratic Union (CDU), a post which she held from 2000 to 2018. A former research scientist, she holds a doctorate in physical chemistry and has worked as a researcher and published several papers. She became interested in politics during the late-1980s and joined the ‘Democratic Awakening’ party, which was formed after the fall of the Berlin Wall. She briefly served as the deputy spokesperson of the new pre-unification caretaker government under Lothar de Maizière. Following German reunification in 1990, she won a seat in ‘Bundestag’ (Germany's lower house) for Stralsund-Nordvorpommern-Rügen from the state of Mecklenburg-Vorpommern. Her political career thrived over the years and she went on to serve as the Minister for Women and Youth before becoming the Minister of Environment and Nuclear Safety. Articulate, intelligent, and hardworking, Merkel did not take long to establish herself as a prominent political figure in the country.  She was eventually appointed the Secretary-General of the Christian Democratic Union of Germany. She then went on to successfully challenge Chancellor Gerhard Schröder in the 2005 national elections and assumed the office of the Chancellor of Germany in November 2005. Willy Brandt
17th July In History
DID WE MISS SOMEONE?
CLICK HERE AND TELL US
WE'LL MAKE SURE
THEY'RE HERE A.S.A.P
Quick Facts

Angela Merkel was born Angela Dorothea Kasner on 17 July 1954, in Hamburg, West Germany, to Horst Kasner and his wife Herlind. Her father was a Protestant theologian and her mother was a teacher. Her mother had also served as a member of the ‘Social Democratic Party’ of Germany. From a young age, Angela was interested in both religion and politics.

She proved to be a good student at school and excelled in Russian and mathematics. After completing her schooling, she entered the ‘University of Leipzig,’ where she studied physics from 1973 to 1978.

In 1978, she joined the ‘Central Institute for Physical Chemistry’ of the ‘Academy of Sciences’ in Berlin-Adlershof. She eventually earned a doctorate for her thesis on quantum chemistry in 1986 and remained associated with the academy as a researcher until 1990. 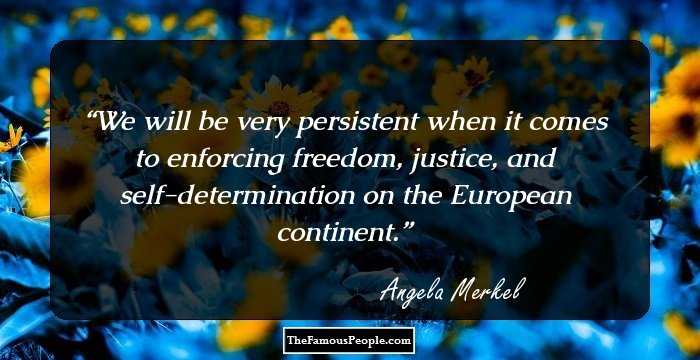 In October 1990, the former East German states were reunified with the rest of Germany. Two months later, Merkel contested at the first post-reunification parliamentary elections and was elected to the ‘Bundestag’ for the constituency of Stralsund – Nordvorpommern – Rügen.

Soon after her election, she was appointed as the Minister for Women and Youth under Chancellor Helmut Kohl who became her mentor. Kohl gave her a more significant role in the cabinet in 1994 as she was promoted to Minister for the Environment and Nuclear Safety. She received greater political visibility in her new role which helped accelerate her career.

In 1998, her mentor Kohl was defeated in the elections and stepped down accordingly. Weeks later, Merkel was appointed Secretary-General of the CDU and became the first woman to attain the post in the history of the party.

She achieved greater success in 2000 when she was elected to replace CDU Leader Wolfgang Schäuble, becoming the first female leader of a German party. Her election came across as a surprise to many as CDU was generally viewed as a male-dominated, socially conservative party.

As the leader of CDU, she enjoyed considerable popularity and advocated the implementation of significant reforms in Germany’s economic and social system. She supported German labor law changes as she felt that existing laws limited the nation’s competitiveness.

She proved to be an efficient leader and earned the support of the citizens. In 2005, she challenged Chancellor Gerhard Schröder of the ‘Social Democrats’ (SPD) in the national elections. During her campaigns, she stated that the main aim of her government would be to reduce unemployment.

In the elections, she narrowly defeated the incumbent chancellor who refused to concede power. Subsequently, the CDU agreed to form a coalition with the ‘Social Democrats’ (SPD), and Merkel was declared the Chancellor of Germany, the first woman to assume this position.

Angela Merkel assumed office as the chancellor on 22 November 2005. She focused on strengthening Germany’s foreign relations and signed the agreement for the ‘Transatlantic Economic Council’ on 30 April 2007 at the White House. She also signed a declaration with India, which greatly boosted Indo-German relations.

She was elected to a second term in 2009. She further strengthened Germany’s ties with India and the two countries held their first intergovernmental consultations in New Delhi in 2011. She has also led seven trade delegations to China since assuming office in 2005.

She had become a much-respected politician by now, and easily won a third term as the chancellor. The third Cabinet of Angela Merkel was sworn in on 17 December 2013. In August 2015, she said that she would run for a fourth term in 2017; she went on to win the 2017 elections.

A rumor surfaced in 2019 that Annegret Kramp-Karrenbauer may take over Merkel's position as chancellor if the current governing coalition proves untenable. The possibility is neither confirmed nor denied by the party. 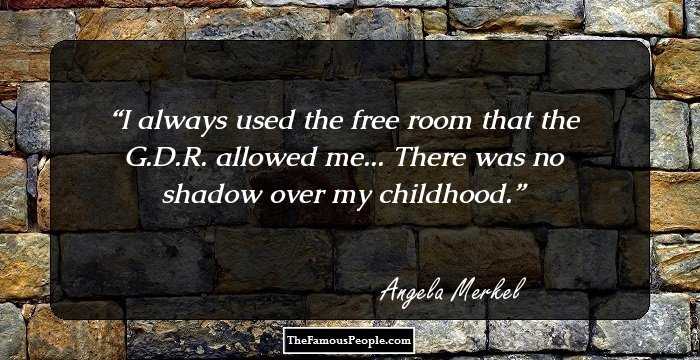 As the chancellor, one of her priorities was to strengthen transatlantic economic relations, which culminated in her signing the agreement for the ‘Transatlantic Economic Council’ in 2007.

Merkel played an important role in strengthening the relations between Germany and India when she made a ‘Joint Declaration’ in 2006 with the then Prime Minister of India Manmohan Singh. The declaration was made to focus on future co-operation between the two countries in the fields of energy, science and technology, and defense.

Merkel was honored with the 'Vision for Europe Award' in 2006.

In 2017, the 'United States Holocaust Memorial Museum' honored her with the 'Elie Wiesel Award.' 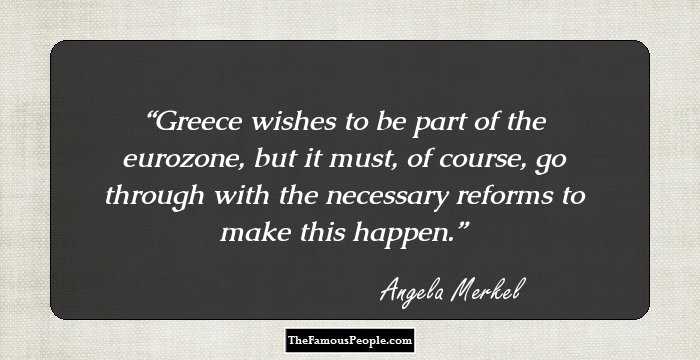 Angela married Ulrich Merkel, a physics student, in 1977. The two got divorced in 1982.

On 30 December 1998, she married quantum chemist Joachim Sauer. Joachim has two sons from his previous marriage.

Quotes By Angela Merkel | Quote Of The Day | Top 100 Quotes

See the events in life of Angela Merkel in Chronological Order