Paul Joseph Goebbels was a German politician. He served as the minister for Public Enlightenment and Propaganda during Hitler’s rule over Germany. He played a crucial role in promoting Nazi Party’s philosophy and ideology of Hitler. Raised in a family with strict Catholic background, he could not serve in the military during the ‘World War I’ on account of his physical deformity. As the district leader of the ‘Nazi Party,’ he founded a weekly newspaper titled ‘The Attack.’ As the maker of the Fuhrer myth, he employed this paper to convey Nazi Party’s message to the German people. As part of his extensive media campaign for ‘World War II,’ he utilized radio, films, parades, and processions to propagate his message about ‘Nazi Party.’ As the director of the ‘Reich Chamber of Culture,’ he had total control over the cultural life of Germany. Due to the activities of this organization, a number of Jewish creative artists lost their occupation. ‘The Nazi Party’ considered modern art as immoral and took measures to seize this art form. Being a skilled propagandist, his effective application of ‘Reich Press Law’ caused the removal of a number of Jewish as well as non-Nazi newspaper and magazine editors in Germany. After learning about Germany’s defeat in the war, he committed suicide. Joseph Goebbels was born on 29 October 1897, in Rheydt, Kingdom of Prussia, German Empire, to Fritz, a factory clerk, and Katharina Maria, into a Catholic family. Due to a deformity in his right leg, he could not serve in the German Army during ‘World War I.’

He attended ‘Christian Gymnasium’ from where he completed his university entrance examination in 1917. The next year, he took admission into the ‘German Franciscan brother’s boarding school’ in Bleijerheide, Netherlands.

From June to October 1917, he worked as an office soldier in Rheydt’s ‘Patriotic Help Unit.’ In the meantime, he lost faith in Catholic religion and studied German literature and philosophy at the ‘University of Bonn.’ After attending ‘Wurzburg University,’ he took admission at ‘Freiburg University.’

He completed his Ph.D. on Wilhelm von Schutz, a romantic dramatist, from ‘Heidelberg University’ in 1921. After completing his studies, he tried to pursue a career in journalism. He also dreamt of becoming a novelist and playwright.

During this time, he penned ‘Michael,’ a semi-autobiographical novel. He gave up on his dream of becoming a novelist when several newspapers and publishing houses rejected his writings. Later, he worked as a bank clerk. After that, he also worked as a caller on the stock exchange for a brief period of time. 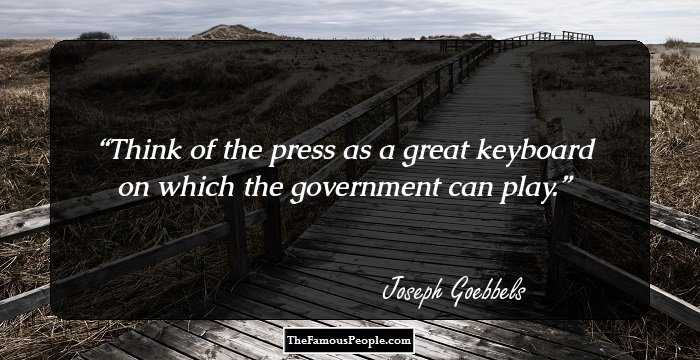 In the later part of 1924, he joined the ‘Nazi Party.’ At that time, the ‘Nazi Party’ was promoting German pride and anti-Semitism. Adolf Hitler was impressed with his works on German economy.

In 1926, he served as Nazi Party’s district leader in Berlin. In the next year, he founded ‘The Attack,’ a weekly newspaper, which he used to represent the party’s philosophy.

In 1928, he was elected to the German Parliament. Hitler made him the propaganda director of the ‘Nazi Party.’ In 1933, he served as minister for Public Enlightenment and Propaganda when Hitler served as the chancellor.

He utilized his authoritative power to supervise the content of the country’s newspapers, magazines, books, music, plays, films, radio, and fine arts. He used these medium to promote Hitler’s philosophy and to spread hatred against Jewish people.

In April 1933, with Hitler’s initiative, he took measures to boycott Jewish businesses. As part of his job, he organized a public ceremony at the ‘Opera House of Berlin’ to destroy “un-German” books. As a result of this destructive activity, a number of valuable books, written by personalities like Albert Einstein, Helen Keller, and H.G. Wells, were damaged.

In September 1933, he worked as the director of the ‘Reich Chamber of Culture.’ This institution was used to control the cultural life of Germany. This organization was instrumental in causing unemployment among Jewish artists. Moreover, the ‘Reich Press Law’ ordered the dismissal of Jewish and non-Nazi editors of German publishing houses.

In 1939, when the ‘World War II’ broke out, he took up the responsibility of inspiring German people to support the war. In order to do so, he effectively utilized the power of media.

The release of ‘The Eternal Jew,’ a propaganda film of the ‘Nazi Party’ in 1940, was his planned initiative to provoke hatred against Jewish groups. This film depicted Jews as worthless parasites.

Through the production of ‘Jud Suss,’ another propaganda film of the ‘Nazi Party,’ he attempted to project the Jews in bad light.

By organizing ‘The Soviet Paradise,’ a Nazi propaganda exhibition, in 1942, he tried to expose the dishonesty of Jewish ‘Bolsheviks.’ In order to disrupt his attempt, Herbert Baum, a German-Jewish Resistance leader, attacked his exhibition. Interestingly, Goebbels decided to keep the news of this attack a secret. He continued his effort to campaign for the war.

In August 1944, he urged the Germans to support Germany’s war effort. After Hitler’s suicide on April 30, 1945, he became the chancellor of Germany. 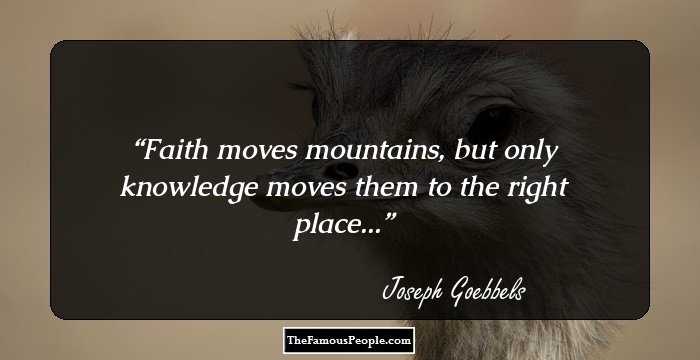 Personal Life & Legacy
He married Magda Ritschel on December 19, 1931. They had six children.

On May 1, 1945, he asked dentist Helmut Kunz to inject morphine into his children to render them unconscious. He then poisoned them with cyanide. Thereafter, he committed suicide along with his wife Magda.

Quotes By Joseph Goebbels | Quote Of The Day | Top 100 Quotes

See the events in life of Joseph Goebbels in Chronological Order