Advanced Search
Arthur Eddington was an eminent scientist who is credited with the establishment of many renowned theories, which have been named after him, such as ‘Eddington number’ and ‘Eddington limit’. He was born to a middle-class family and after the sad demise of his father his mother took up the responsibility of the family. He was taught at home before attending school. He excelled as a student and earned several scholarships which helped him in his further studies. His remarkable performance at the ‘Owens College’ earned him the opportunity to attend the prestigious ‘University of Manchester’. Physics was his area of interest and he completed his graduation with a major in the subject. He was trained under the tutelage of great scholars like Arthur Schuster, Horace Lamb, John William Graham and Robert Alfred Herman, and these learned people provided him with vast knowledge and enhanced his excellence. He engaged in experimental works and carried on rigorous research and established theories which served as breakthrough in the world of physics. He was involved in astronomical research and developed theories regarding the interior of stars and stellar movements. He was the first English physicist to explain Einstein’s theory of relativity. His books answer many questions about the universe; however, his fatal disease put an abrupt halt to his investigation of the ‘fundamental theory’. William Henry B...
DID WE MISS SOMEONE?
CLICK HERE AND TELL US
WE'LL MAKE SURE
THEY'RE HERE A.S.A.P
Quick Facts

Humanitarian Work: Eddington had chaired the ‘National Peace Council from 1941-43.

British Celebrities
Mathematicians
British Men
Victoria University
Cambridge University
Childhood & Early Life
He was born to Arthur Henry Eddington and Sarah Ann Shout on 28th December, 1882, in Kendal, Cumbria (formerly known as Westmorland). When he was two years old, his father died in the ‘typhoid epidemic of 1884’. Arthur and his sister were raised by their mother.
The family shifted to the sea-side town of Weston-super-Mare, and Eddington was initially taught at home and then attended preparatory school. He enrolled at the ‘Brynmelyn School’ in the year 1893, wherein he excelled in all the subjects particularly, English and Mathematics.
He joined the ‘Owens College’, Manchester (now known as the ‘University of Manchester’) in 1898, with the help of a scholarship he received.
He took up a general course during his first year at the institute and later, took up physics as a discipline. There his teachers were renowned physicist Arthur Schuster and mathematician Horace Lamb, and both of them inspired him to a great extent.
Another mathematician who inspired him was J. W. Graham, whom he met during his stay at the ‘Dalton Hall’. He completed his graduation in 1902, with First Class Honours in B.Sc. with physics.
In 1902, he enrolled at the ‘Trinity College’ of the ‘University of Cambridge’ with the help of a scholarship he received, owing to his performance at the previous institution. At the university, he was taught under the fine tutelage of Robert Alfred Herman.
In 1904, he earned the position of a ‘Senior Wrangler’, which was awarded to a second-year student for the first time. This was considered to be the highest intellectual achievement in Britain at one point of time. 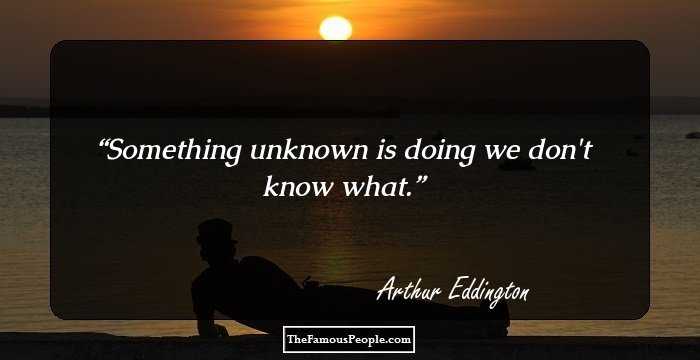 Continue Reading Below
Career
He earned his M.A. degree in 1905, and thereafter, carried on experimental work in the ‘Cavendish Laboratory’. At the same time, he taught mathematics to engineering students for a short period of time.
In 1906, he left Cambridge and moved to Greenwich, after he was chosen as chief assistant at the ‘Royal Greenwich Observatory’ to the ‘Astronomer Royal’.
He was engaged with the study of the parallax or the displacement in position of the ‘433 Eros’ asteroid on photographic plates.
In 1912, George Darwin, son of Charles Darwin, who was the ‘Plumian Professor of Astronomy and Experimental Philosophy’ at the ‘Cambridge University’, died and the following year, Arthur was appointed to the post.
In 1914, following the death of astronomer Robert Ball, who had held the position of the ‘Lowndean Professor of Astronomy and Geometry’ at Cambridge, Eddington was appointed as the Director of the ‘Cambridge Observatory. The same year, he was made a ‘Fellow of the Royal Society’.
In 1914, he wrote the astronomical piece ‘Stellar Movements and the Structure of the Universe’ where he discussed his analytical studies on the movement of stars in the Milky Way galaxy.
During World War I, he carried on scientific investigation and testified Einstein’s ‘Theory of Relativity’.
In 1916, he studied stars and analysed the ‘Emden polytropic models’ which considered the stars as a sphere of gas and it's the thermal pressure of the sphere of gas which counters the gravitational force. Eddington concluded that in addition to the thermal pressure, radiation pressure is also a requisite to keep the stars from collapsing.
His theory about the stars, even though lacked firm base, helped in computation of the density, temperature and pressure of the interior of the star. Eddington advocated his theory despite its drawbacks and wanted it to be preserved as he believed that it would be helpful in astrophysics.
Continue Reading Below
In 1924, with the help of his astronomical investigations he established the relationship between mass and luminosity of a star. The theory stated that the size of a star and its luminosity are related by direct variation.
Even though a section of the scientific community condemned his theories and models; many scientific minds of that era acknowledged the usefulness of his theories in matters related to the process of stellar evolution.
Arthur also formulated a method of gauging the riding accomplishments of a cyclist and this number is popularly known as the ‘Eddington number’.
During 1920, he published many works such as ‘The Mechanical Theory of Relativity’, ‘The Domain of Physical Science’, ‘Stars and Atoms’, and ‘The Internal Constitution of Stars’.
In 1926, his book ‘The Internal Constitution of the Stars’ became very popular and was also regarded as a standard textbook in the study of astrophysics.
He also penned some philosophical books like ‘The Nature of the Physical World’ which was published in 1928, and the following year, the book ‘Science and the Unseen World’ was printed.
From 1930 to 1939, he wrote prolifically and some of the scientific works penned by him during this period include ‘Why I Believe in God: Science and Religion, as a Scientist Sees It’, ‘The Expanding Universe: Astronomy’s Greatest Debate’, ‘New Pathways in Science’, ‘Relativity Theory of Protons and Electrons’ and ‘Philosophy of Physical Science’.
Major Works
This learned scientist was involved with much research work which encompassed study of astronomy, physics, relativity, movements of stars and much more. However, the most significant of his investigations was his quest of establishing a ‘fundamental theory’. He wanted to build one single connection between many different disciplines such as gravitation, quantum theory, cosmology and relativity.
However, he could not complete his research on the fundamental theory and this ‘theory of everything’ remains a mystery in physics.
Awards & Achievements
In 1907, he was honoured with the ‘Smith’s Prize’ which he earned for his statistical approach that was based on the drifting of two background stars.
During 1920s this talented astronomer was bestowed with several honours such as ‘Bruce Medal of the Astronomical Society of the Pacific’, 'Henry Draper Medal of the National Academy of Sciences', 'Gold Medal of the Royal Astronomical Society', 'Prix Jules Janssen of the French Astronomical Society' and 'Royal Medal of the Royal Society'.
In 1930s he was given the honour of Knighthood. He was also awarded with the ‘Order of Merit during the same decade. He also won the ‘Hon. Freeman of Kendal’.
Personal Life & Legacy
On 22nd November 1944, this eminent scientist breathed his last at the ‘Evelyn Nursing Home located in Cambridge, after fighting with cancer.
On 27th November, his last funeral rights were performed at the ‘Cambridge Crematorium’ (Cambridgeshire) and his body was cremated. Later, the remains were buried at the ‘Ascension Parish Burial Ground’ in his mother’s grave.
His last written book ‘Fundamental theory’ was published posthumously in 1946.
Recommended Lists:
Scientists #146

See the events in life of Arthur Eddington in Chronological Order