Advanced Search
William McKinley was the 25th President of the United States, the last one to have served in the American Civil War. Having worked as a school teacher before the war, he decided to study law once the war was over. He proceeded to study at the Albany Law School in New York and opened his own practice following his admission to the bar. Eventually he entered politics and was elected to the Congress. He went on to hold the office of Ohio’s governor and set his eyes on the country’s presidency. He ran for presidency as a Republican nominee in 1896. The country was in the throes of an economic depression, and he promised to restore prosperity to the economy through high tariffs. He defeated his Democratic rival, William Jennings Bryan and assumed the presidency in 1897. His administration was marked by rapid economic growth and he secured the passage of the Gold Standard Act. He also imposed certain tariffs to protect manufacturers and factory workers from foreign competition and this move made him popular with the organized labor. He was easily re-elected in 1900, but within six months into his second term, he was shot by an unemployed man named Leon Czolgosz, and died a few days later American Celebrities
Political Leaders
American Men
Albany Law School
Male Leaders
Childhood & Early Life
William McKinley Jr., was born on January 29, 1843, in Ohio as the seventh child of William and Nancy McKinley. His father was a manager of a charcoal furnace and a small-scale iron founder.
After graduating from high school in 1859, William McKinley Jr., joined the Allegheny College in Meadville, Pennsylvania. However, he remained there for only one year before he became ill with depression and returned home. Financial issues in the family prevented him from returning to college after his health improved.
He started working to add to the family income, first taking up the job of a postal clerk and then working as a school teacher. 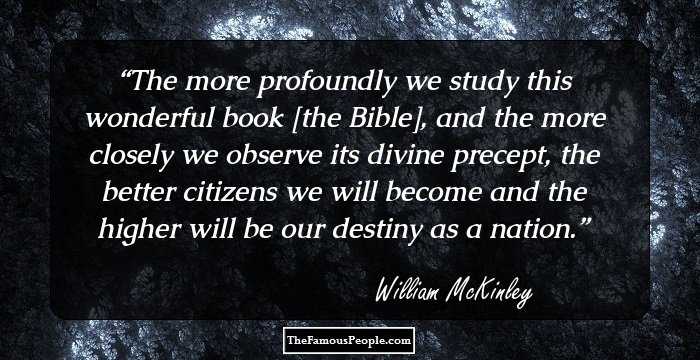 Quotes: Will
Continue Reading Below
Career
He was 18 years old in 1861 when the Civil War broke out. He enlisted in an Ohio regiment under the command of Rutherford B. Hayes who became his mentor and lifelong friend. He joined as a private, was promoted to second lieutenant in 1862, and was discharged as a brevet major, in 1865.
After the war he studied law at the Albany Law School in New York and was admitted to the bar in Ohio in 1867. Soon he built a successful practice in partnership with a prominent lawyer, George W. Belden.
McKinley entered politics when his mentor from the war, Hayes, was nominated for governor in 1867. McKinley made speeches on his behalf and campaigned for his friend. Over the years Hayes became a prominent politician and was elected as the President of the United States, in 1877.
The same year Hayes became the president, McKinley won his first congressional seat. As a Republican, McKinley belonged to a minority in the congress. He was a strong advocate for protective tariffs which he believed allowed American manufacturers to develop by providing them a price advantage in the domestic markets.
The ensuing years saw McKinley become an increasingly significant figure in national politics. He served a brief stint as Ohio’s representative on the Republican National Committee in 1880 and four years later, was elected as a delegate to the 1884 Republican convention.
In 1890, the Congress passed the McKinley Tariff which raised the average duty on imports to almost fifty percent. The tariff aimed at safeguarding the domestic industries from foreign competition.
He contested the presidential election of 1896 in which he faced Democrat William Jennings Bryan. America was reeling under a deepening economic crisis at that time and McKinley promised to reverse the Americans’ fortunes by heralding a period of high growth rate and prosperity. He ultimately won the election following a very dramatic presidential race.
William McKinley was inaugurated as the President of the United States on March 4, 1897. As promised, he quickly set upon bringing about financial and tariff reforms to accelerate the economic growth of the nation. His tenure saw rapid expansion in trade and commerce, and he soon gained the respect and goodwill of the citizens.
The Cuban War of Independence, fought by the Cubans against Spanish rule, was going on at that time. McKinley did not want the United States to intervene, but gave in to pressure and entered into a conflict with Spain in an attempt to liberate Cuba. In the brief Spanish-American War, the United States easily defeated Spanish forces in the Philippines, Cuba, and Puerto Rico and following the signing of Treaty of Paris, Cuba became independent in 1899.
McKinley stood for re-election in 1900, and this time too he faced his previous opponent, William Jennings Bryan, who he defeated with a greater margin of victory than he obtained four years earlier. He was inaugurated for his second term as the president on March 4, 1901. 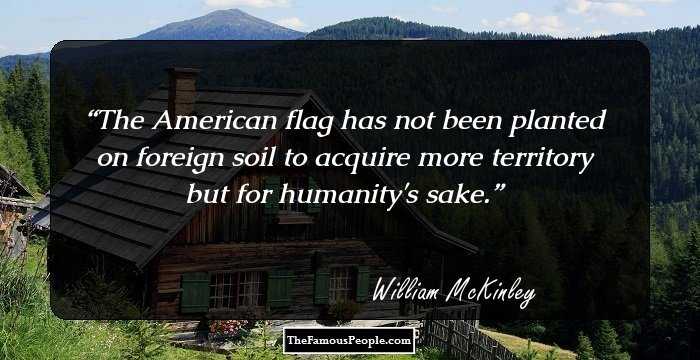 Major Works
President William McKinley is credited to have brought about rapid economic progress in America during his tenure. Especially significant among the various measures he implemented were his promotion of the Dingley tariff to protect American manufacturers and factory workers from foreign competition and the passage of the Gold Standard Act.
Personal Life & Legacy
William McKinley fell in love with Ida Saxton and married her in 1871. The couple had two daughters, both of whom unfortunately died in their childhood. Ida became depressed after the deaths of her daughters and also developed epilepsy. McKinley remained deeply devoted to his wife and tended to her for as long as he lived.
Shortly after he was re-elected as the president, McKinley embarked on a tour of the western states which ended with a speech at the Pan-American Exposition in Buffalo, New York, on September 5, 1901. The following day he was shot at twice by an unemployed mill worker named Leon Czolgosz. The president was rushed to the hospital where he suffered for a few days and died on the morning of September 14, 1901. The nation was plunged into genuine grief at the news of his passing as he had been a much loved and respected president. 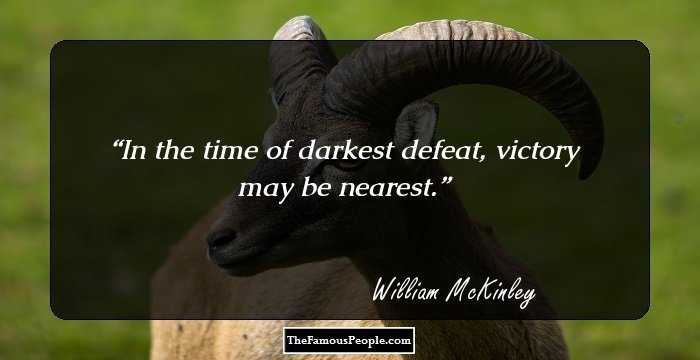 Quotes By William McKinley | Quote Of The Day | Top 100 Quotes

See the events in life of William McKinley in Chronological Order