Deemed as one of the “celebrity politicians” of the 20th century, William Jennings Bryan was a famous American politician during the last decade of the 19th century and the first quarter of the 20th century. A first-rate orator, Bryan was also accredited for introducing ‘stumping tour’ in America. All his life, he lived in the glare of publicity and was active in politics till his last breath. Often dubbed as the hero of common man, Bryan was an advocate of laissez-faire and worked every inch towards it. Standing three times as a Democratic Party candidate for President of the United States (1896, 1900 and 1908), he could not win in all his three attempts. Nevertheless, he was appointed the Secretary of State under democratic president, Woodrow Wilson, where he proved his mettle as a decision-maker. He was opposed to Darwin’s theory of evolution and this made him a little unfavorable; he was often criticized for his religious fervor too. He never accepted Darwinism as he considered it a menace on Christianity and democracy. He even propelled an anti-evolution campaign to stop the spread of Darwin’s theory in schools and church. Despite his religious extremism, he never really lost the full support, respect and approval of his followers. He was one of very few politicians of his age who were admired for their persona more than their political stance.
Continue Reading Below Cause of Death: Apoplexy 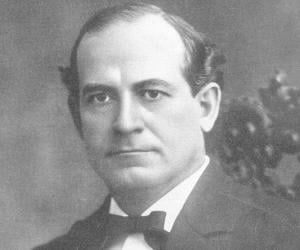 American Celebrities
American Men
Northwestern University
Male Leaders
Pisces Leaders
Childhood & Early Life
William was born to Silas Lillard Bryan and Mariah Elizabeth Bryan and was baptized at the age of 14 at the Cumberland Presbyterian Church.
He was mostly home-schooled and was admitted to Whipple Academy in Jacksonville, Illinois in 1874.
After finishing high school, he attended the Illinois College, from where he graduated in 1881.
He entered the Union College of Law and upon the completion of law studies in 1883, he joined the Illinois State Bar.
He stayed in Illinois and practiced law, before moving to Lincoln, Nebraska in 1887. 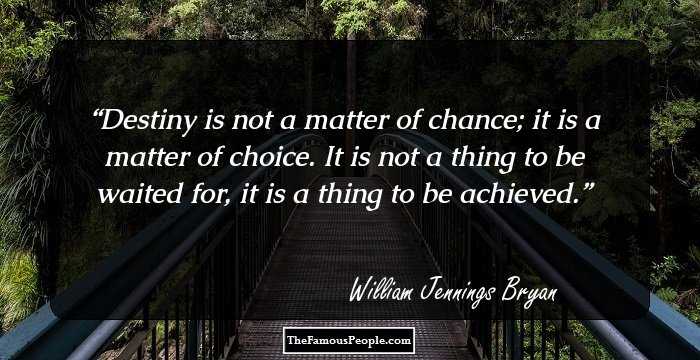 Who Is The Most Popular BTS Member?
Career
In 1890, he won the election to the U.S. House of Representatives as a democratic candidate.
An excellent orator, he always took the lead when it came to delivering speeches. In 1896, when the silver market was on a decline, he addressed the Democratic National Convention, supporting ‘free silver’, which according to him was essential for the prosperity of the nation.
In 1896, he stood in the Presidential election and was (still is) the youngest candidate ever to contest this election, but eventually lost the election.
In 1898, he supported the Spanish-American war, but when the U.S. annexed Philippines, he raised his voice against it. He censured their imperialism, stating that the U.S. should not follow the footsteps of the Great Britain and their colonialism.
He fought the 1900 Presidential election on the plank of anti-imperialism but lost to Republican candidate, William McKinley.
In 1908, he made a third and his last unsuccessful attempt at the Presidential election.
Following his loss at the Presidential elections, he remained busy as a Chautauqua (adult education movement in the U.S.) speaker, perpetuating religious ideologies.
For his ardent support towards Thomas Woodrow Wilson in the presidential election of 1912, he was appointed the Secretary of State in 1913.
He resigned from the office in 1915 and campaigned as a private citizen for Woodrow Wilson the next year.
Continue Reading Below
After his national campaign, the 18th Amendment of United States Constitution, which prohibited production, transport and sale of alcoholic beverages, was passed in 1918.
In 1920, he severely criticized the theory of evolution (Darwin’s theory), stating it as a threat to democracy and Christianity.
He launched an anti-evolution campaign in 1921 and in order to uproot this philosophy he ran for the post of Moderator of the General Assembly of the Presbyterian Church in the USA but he eventually lost.
In 1925, he participated in the ‘Scopes trial’ in which a high school teacher, John Scopes was found guilty of violating the ‘Butler’s Act’, according to which it was unlawful in Tennessee to teach human evolution. Though the case was initially won by Bryan, the Supreme Court reversed the verdict which led to the acquittal of Scopes. 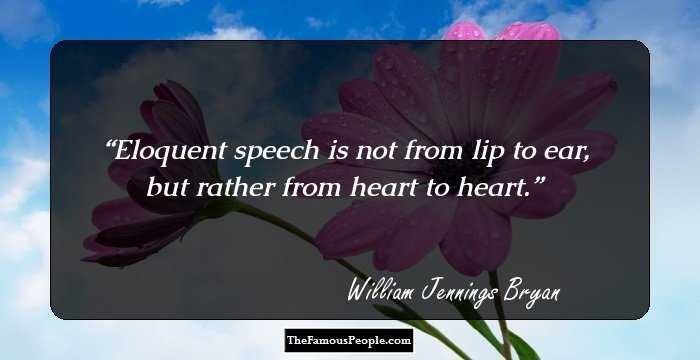 Quotes: Heart
Major Works
As the Secretary of State, one of his main accomplishments was to get 28 signatories to abstain from hostilities during arbitration of disputes, before World War I.
He was also instrumental in the Bryan–Chamorro Treaty in 1914, which allowed the U.S. to build a canal across Nicaragua and also gave the permission to form naval bases at the Gulf of Fonseca and on the Corn Islands.
During his presidential campaigns, he advocated Free Silver (for the progress of the nation), anti-imperialism (in protest the annexation of Philippines), antitrust law (to maintain market competition).
Towards the end of his political career, he participated in the controversial ‘Scopes’ trial’ in which he denounced Darwinism and the theory of evolution.
Personal Life & Legacy
Bryan married Mary Elizabeth Baird on October 1, 1884 with whom he had three children.
Five days after the ‘Scopes’ trial’, he died in his sleep and was interred at the Arlington National Cemetery, where his tombstone reads "He kept the Faith."
The ‘Bryan County’ in Oklahoma is named after the politician. The Bryan College in Dayton, Tennessee is also named after him while his house in Nebraska was declared a historic landmark.
Trivia
This famous American politician was and still is the youngest ever candidate to run for the Presidential election.
This renowned American politician was the first presidential candidate to campaign in a car! 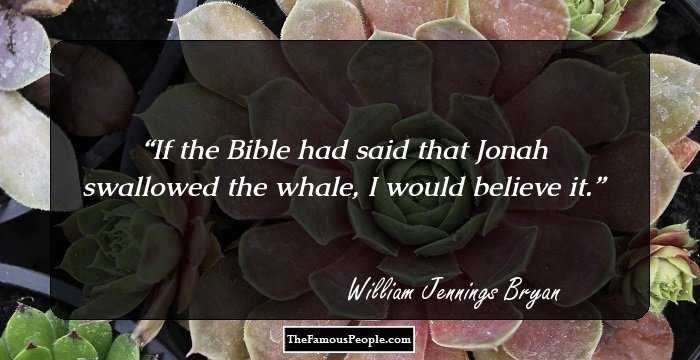