William Herschel was a German–British composer and astronomer, best known for his discovery of the planet Uranus. He had also been credited as the founder of “sidereal astronomy” for the study of heavenly bodies. Born and raised in Hanover, to a military musician father, William moved to Great Britain at the age of 19. He soon began his musical career, following in his father’s footsteps. His early work in music was praised by the likes of Beethoven and Mozart. He also had a keen interest in astronomy. He studied earlier researches done on the subject. Soon, he became well-versed in astronomy and made some discoveries that turned him into one of the finest astronomers of his time. He built his own telescopes, which were more powerful than the ones being made at that time. He was the first to discover the planet Uranus and two of its satellites. He was also the first man to conclude that our solar system was constantly moving. Following his impressive work, he was honored with a fellowship by the ‘Royal Society of London’ and was awarded the prestigious ‘Copley Medal’ in 1781.
Continue Reading Below British People
German People
British Men
German Men
Male Composers
Male Musicians
Childhood & Early Life
William Herschel was born Friedrich Wilhelm Herschel, on November 15, 1738, in the Electorate of Hanover, Germany, to a military musician father, Issac Herschel. Isaac was an oboist who played classical music in the Hanover military band. William’s mother, Anna Ilse Moritzen, was a housewife. William was one of the 10 children in his family.
Due to some political reasons, William’s father sent him and one of his other sons to Great Britain in 1757, when William was 19 years old. William continued his studies there. Since childhood, he had seen his father play music and had become extremely fond of the art form.
His first few months in Great Britain were not easy. William did not know English and had a German name. He changed his name to its English version, “William,” and learned English quickly. He also began studying music in England. 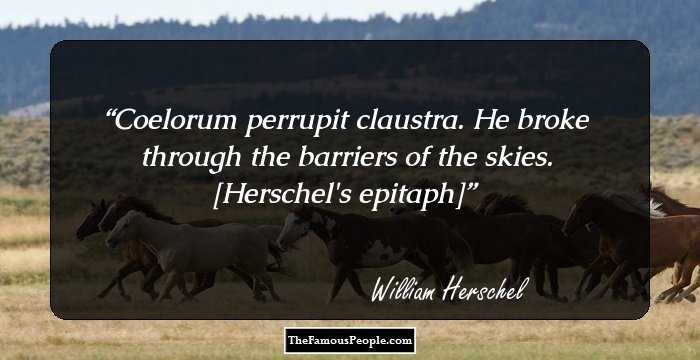 The Hottest Male Celebrities With The Best Abs
Music Career
William Herschel was a quick learner and learned to play the harpsichord, the violin, and the organ. In the early few years of his musical career, he focused solely on making path-breaking music and composed about 24 symphonies, many more concertos, and church music.
He joined Charles Avison’s Newcastle orchestra in 1761. He played the violin and was a soloist for the band for a successful season. William moved from place to place in search of better career opportunities. He worked for orchestras and bands in cities such as Sunderland, Leeds, Darlington, and Halifax.
As he gained more experience and fame, he composed more symphonies. In 1766, he became the organist of the ‘Octagon Chapel’ in Bath. He also worked briefly as the “Director of Public Concerts” in Somerset. He appeared in his debut show in January 1767 and exhibited his versatility as a musician by performing several of his own compositions.
In the early 1770s, one of his sisters, Caroline, also joined him in England. They shared a home in New King Street, Bath. The house they lived in is now known as the ‘Herschel Museum of Astronomy.’ Three of his brothers also joined him later and got involved in the Bath music scene. Caroline was also a soprano soloist. William’s appointment as the director of the Bath orchestra helped his entire family professionally. 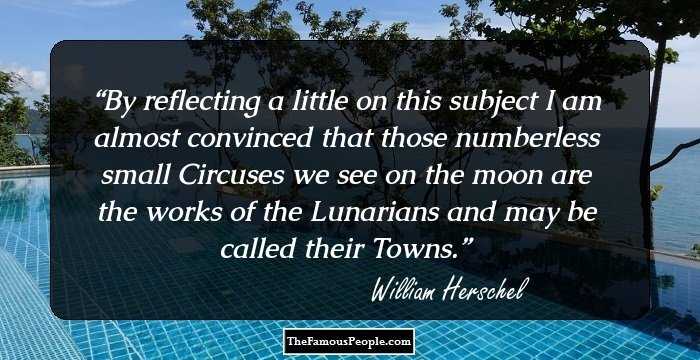 Quotes: I
Astronomy
After making a name for himself as an accomplished musician, William discovered writer Robert Smith’s works. William was intellectually curious and wanted to find a link between math and music. Robert Smith’s book ‘Harmonics, or the Philosophy of Musical Sounds’ was William’s stepping stone into the study of astronomy. William was also fond of Smith’s book ‘A Compleat System of Opticks,’ which described the construction of telescopes.
This book led William to study stars, and he set out make his own telescope. The astronomers in his days were content with studying the nearby celestial bodies, such as the Moon and the Sun, but William’s curiosity had him looking far beyond.
He acquired all the knowledge of lenses, glasses, and anything that he would require to make his own telescope. He asked for funds for the same, but he was unsuccessful in collecting money. After failing multiple times, he was ultimately successful in making his own telescope, which was far more powerful than any other telescope that existed in the world at that time.
The ‘Greenwich Observatory’ was said to have the best telescopes at that time, and William’s inventions outdid them in almost every aspect. He had his younger brother Alexander and sister Caroline as his assistants. The family also continued to work on their music simultaneously.
Continue Reading Below
In the 1780s, he started gathering data from his observations, with the help of Caroline. He accidentally discovered the planet Uranus, which he first thought was a comet. He continued to observe it for a while and understood its movements before deciding that it was a planet.
This was the first planet that was discovered through a telescope, as the first five planets in the solar system were observable through the naked eye. He first named the planet “Georgian Star,” after King George III of Great Britain, but its name was later changed to “Uranus.”
His discovery was path-breaking and brought him in the good books of the ‘Royal Society of London.’ He became a member of the society in 1782. He was also named “The King’s Astronomer” around the same time. In addition, he was also awarded the ‘Copley Medal’ and was given a monthly payout by the ‘Royal Court,’ which enabled him to work full-time in the field of astronomy.
He constructed more than 400 telescopes in his career. He made his biggest telescope in 1789. It was 48 inches in diameter. However, it was dismantled 50 years later. In August 1789, he discovered the first moon of Saturn, and 2 months later, he found another one. His new reflecting telescope was the most powerful the world had ever seen before.
He sold the telescopes and received a generous pension from the king. This led him, Alexander, and Caroline to be able to lead a comfortable life while continuing with their space exploration.
William also discovered the binary star system and made a catalogue of about 850 such stars. His son, John Herschel, who also became an astronomer, discovered many more.
William was the first person to provide actual evidence to conclude that the solar system was actually moving, although it had been debated over for many centuries prior to that. He also concluded that ‘Milky Way’ galaxy was shaped like a disk.
In February 1800, William set out to study the Sun and made another milestone discovery. He was trying out different filters for checking out the spots on the Sun, when he found that it emits a light invisible to the naked eye. This was the inception of the research on what later came to be known as “infrared light.” It was the focus of more research after William’s death.
William’s expertise was not only limited to analyzing star systems. He had a knack for biodiversity, too. After a close microscopic observation, he concluded that the coral was not a plant, as it lacked some of the signature characteristics attributed to plants.
Personal Life & Death
In 1816, William was made a “Knight of the Royal Guelphic Order” by the Prince Regent.
William and his wife, Mary, had a son, John Herschel, in 1792. John also followed in his father’s footsteps and became an astronomer. He was honored by the royals of Great Britain.
William died on August 25, 1822, in an observatory in Slough, England. After his death, Caroline moved back to Germany. 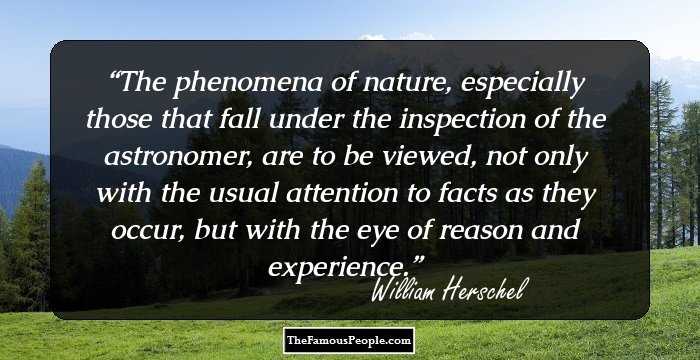 Quotes: Experience, Nature
Recommended Lists:
Musicians #2041
You May Like

See the events in life of William Herschel in Chronological Order