Sir Christopher Wren was the most celebrated English architect of his time, best known for the design of St Paul's Cathedral, London. Born to a rector, Wren was the only surviving son of their parents and was delicate in health from an early age. After being schooled privately at home for few years, Christopher Wren attended the Westminster School and was then enrolled in the Oxford University. Inclined towards mathematics from a young age and apparently destined for a career as a scientific scholar, after completing his Masters, Wren became the professor of astronomy in London. Wren's interest in architecture developed when he was commissioned to design the Sheldonian Theatre in Oxford. Later, he visited Paris to study French and Italian baroque styles which inspired and influenced his later works. After the 1666 Great Fire of London destroyed most of the city, the king appointed him as one of the architectural commissioners to oversee the rebuilding of the city. Over the next 46 years, Wren designed and supervised the rebuilding of 51 city churches including his masterpiece, St. Paul’s Cathedral. One of the reasons for his acclaimed work was that he insisted on the finest materials and a very high standard of workmanship. Later, he also received royal commissions to design hospitals and many other buildings all around England. Rightly regarded as the most significant British architect of all time, Sir Christopher Wren skillfully interpreted the Baroque style in England and dominated English architecture for 50 years
Continue Reading Below British People
Libra Scientists
Male Architects
Male Scientists
British Architects
Childhood & Early Life
Christopher Wren was born on October 20, 1632, in East Knoyle, Wiltshire, to Christopher Wren Sr., the rector of East Knoyle, and his wife, Mary Cox. He had several sisters including Catherine, Susan and Elizabeth.
Wren was a sickly child and received his early education from Rev. William Shepherd, a local clergyman. He was an intelligent child and developed an interest towards mathematics from a young age.
Later, he studied at the Westminster School and in 1649, attended the Wadham College, Oxford. His primary subjects were Latin and the works of Aristotle in college but he also showed much interest in science and mathematics at Oxford.
In 1651, he graduated with a Bachelor’s degree, and completed his M.A. in the next two years. Wholly focused on astronomy, physics, and anatomy, he became the Professor of Astronomy at Gresham College, London, at the age of 25. 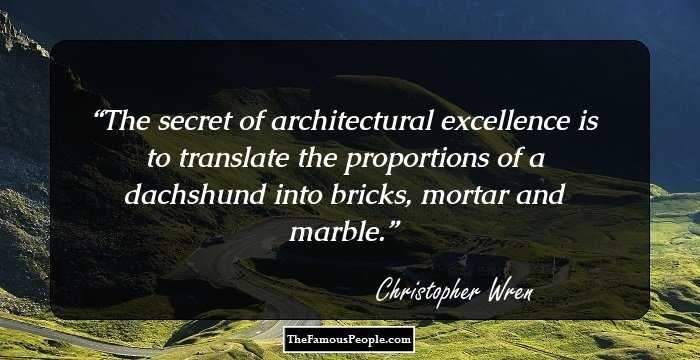 Who Is The Greatest Female Warrior In History?
Career
In 1660, Wren became one of the founding members of the ‘The Royal Society’, along with other mathematicians, scientists and scholars. The following year, Wren was appointed the Savilian professor of astronomy at Oxford.
In 1662, Wren first ventured into architecture and subsequently designed the Sheldonian Theatre at Oxford, a building intended for university ceremonies. This work earned him much acclaim as an architect.
In 1665, Wren toured France for several months to acquire knowledge about the French Renaissance and Baroque architecture. This journey proved to be a rich source of inspiration for him and had significant influence on his future works.
The Great Fire of 1666 destroyed much of London and reduced most of the city to a smoking desert. Subsequently, Wren was chosen by King Charles II as a member of the commission created to undertake the reconstruction of the city.
Being one of the chief architects on the committee, Wren was given the responsibility to replace the 87 parish churches demolished by the Great Fire. In 1669, he was appointed ‘Surveyor of Works’ to Charles II, a post which he held until 1718.
By 1670, Wren was also working on designs for a new St. Paul's Cathedral, which eventually materialized into his masterpiece. While working on the City Churches, he also undertook several other projects.
Some other examples of Wren's brilliant architecture are the Royal Hospital at Chelsea, the library at Trinity College, and the Royal Naval Hospital at Greenwich. He was also responsible for remodeling the south front of Hampton Court Palace.
In addition to being an outstanding architect, Wren was also a notable anatomist, astronomer, geometer, and mathematician-physicist. He also served as an active Member of Parliament for Old Windsor in 1680, 1689 and 1690. 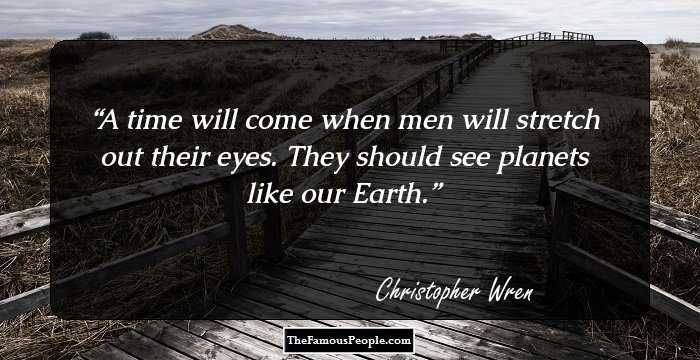 Quotes: Time, Like, Will
Major Works
Between 1670 and 1686, he designed 51 new churches for the city of London which are today known as the ‘City Churches’. His work on the City Churches established him as one of England’s leading architects.
St. Paul's Cathedral, which took nearly 35 years to build, is considered as Wren's masterpiece. With its splendid dome, remarkable scale, and theatrical grandeur, the design of St. Paul's signifies the influence of French and Italian architecture.
Awards & Achievements
Christopher Wren was knighted on November 14, 1673. 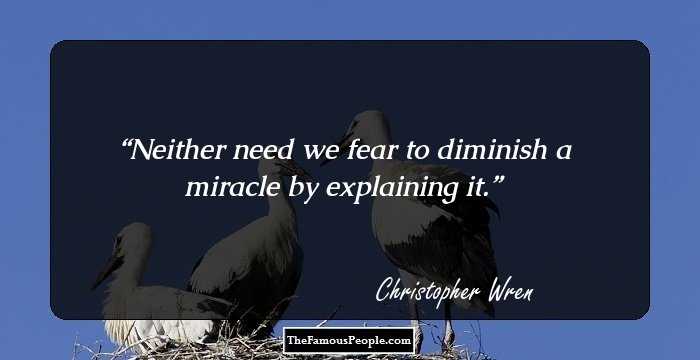 Quotes: Fear, Need, Miracle
Personal Life & Legacy
In 1669, Wren married Faith Coghill, daughter of Sir John Coghill of Bletchingdon. They had two sons: Gilbert, who died at the age of 18 months and Christopher. Unfortunately, Faith died in 1675.
In 1677, Wren married Jane Fitzwilliam, daughter of William FitzWilliam, 2nd Baron FitzWilliam. The couple had two children; a daughter, Jane, and a son named William. Unfortunately, in 1680, Jane too died of illness. Wren never married again.
Sir Christopher Wren died on February 25, 1723, in London, England.
You May Like