(Founding Father of the United States)

‘These are the times that try men’s souls’ is quoted by one of the famous founding fathers of American Revolution, Thomas Paine. He became one of the first individuals to campaign for a world peace organization and communicated his ideas about ‘revolution’ and ‘independence’ effectually, attracting large hordes of people. However, his deep-seated views of religion pulled him down in the eyes of the public and at the time of his demise, only a trickle few attended his funeral. His written works such as ‘The Age of Reason’ and ‘Common Sense’ brought his ideas out on religion, property and how important it was for the Americans to gain independence from the British. He had his share of brickbats and bouquets. While he was ostracized for his open condemnation of religion, on the other hand he was commended his ‘freethinking’ philosophies. Before his name got logged into the archives of American history for both, good and bad reasons, his beginnings were especially humble. He began his career in writing as a publicist at first and then went on to become the co-editor of a very popular magazine in Pennsylvania. Through his writings he swayed public opinion of American public in favour of independence from British. If you would like to learn more about this famous personality, scroll further for more information. American People
Revolutionaries
Political Activists
Non-Fiction Writers
American Men
Childhood & Early Life
Thomas Paine was born to Joseph Paine and Frances in Thetford, Norfolk, England. His father was a Quaker, while his mother was a staunch Anglican.
He studied at Thetford Grammar School and when he became a teenager, he was made an apprentice to his father, who was a corsetmaker. He also served as a privateer for a brief period of time. 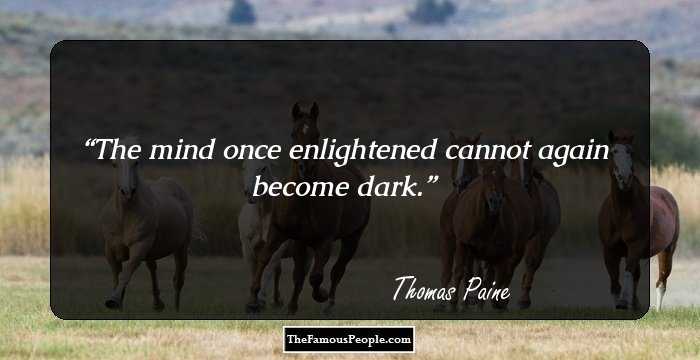 Continue Reading Below
Career
In his earlier days, he established his own business in Sandwich, Kent, which failed miserably, following which, he was appointed as a supernumerary officer.
In 1762, he became an Excise officer and two years later, he was transferred to Alford, where he earned 50 Sterling Pounds per annum.
On August 27, 1765, he was fired as Excise Officer because he claimed to have examined a few properties that he never really inspected in the first place. He requested for reinstatement and till the time he didn’t get back to work at the Board of Excise, he worked as a stay-maker for a few months.
From 1767 to 1768, he served as a school teacher in London and also gradually became involved in civic issues in and around the city.
He authored, ‘The Case of the Officers of Excise’, which was an article requesting the Parliament for better pay and working conditions for the excise officers. This is largely believed to be his early, written political works.
In 1774, he was once again fired from his excise position and the same year, he met Benjamin Franklin, who suggested him to move to America. He also wrote him a letter of recommendation.
He arrived in the United States of America on November 30, 1774 and the next year, he was appointed as the editor of the ‘Pennsylvania Magazine’. He began publishing several articles under an alias, condemning the African slave trade and other articles pertaining to ‘Justice and Humanity’.
Within months of his arrival, he witnessed the mounting conflict between the settlers and England and penned his most famous work, ‘Common Sense’, a popular pamphlet published on January 10, 1776 which advocated the idea of republicanism.
From 1776 to 1783, during the war, he penned 16 ‘Crisis’ papers, which contributed to the patriotic cause by inspiring the soldiers. This is when he said his most famous line, ‘These are the times that try men’s souls’.
Continue Reading Below
In 1777, he was elected as secretary to the Congressional Committee for Foreign Affairs, but was expelled from it the next year itself.
He found a new post as the clerk of the General Assembly of Pennsylvania and in 1780 he authored ‘Public Good’, which called for a nationwide resolution to substitute the incompetent Articles of Confederation with a sturdy government.
In 1787, he moved back to England, where he buried himself with his new-found obsession; the French Revolution. He supported the revolution and in response to Edmund Burke’s publication, who openly opposed the revolution, he wrote, ‘Rights of Man’, four years later, where he called for a bloody revolution.
He was labeled as a radical in Britain and as a result, served a jail term from 1793 to 1794, where he narrowly escaped execution for his views on the revolution.
It was during his time in jail, he wrote the first part of his most controversial works, ‘The Age of Reason: Being an Investigation of True and Fabulous Theology’. After he was released from prison, he wrote the second and third parts of ‘The Age of Reason’, when he stayed in France.
He wrote his last pamphlet, ‘Agrarian Justice’ in 1795, which spoke about land proprietorship, natural inheritance and how people were separated from the lands that were rightfully theirs.
He returned to the United States in 1802 or 1803, only to discover that most of his ground-breaking works had been forgotten due to his notorious works on religion. 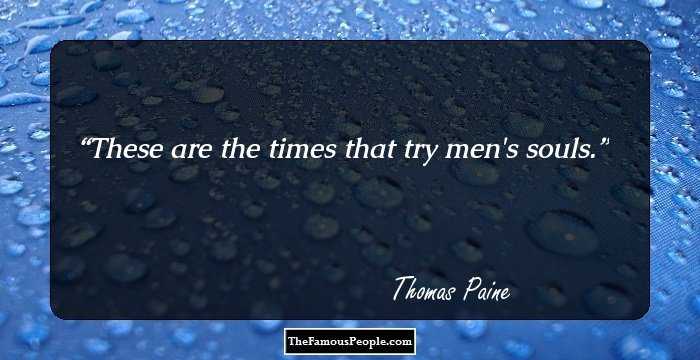 Major Works
Paine authored ‘Common Sense’, a 50-page pamphlet in 1776, in which we argued that America should demand complete independence from Great Britian. This was considered one of his most inspirational works and within just a few months of its publication, it sold over 5, 00,000 copies. At that time American public opinion was still largely undecided about full-scale revolt and freedom from British rule. Through ‘Common Sense’, Paine provided cogent arguments in favour of independence and played an influential role in building public opinion against British rule.
Personal Life & Legacy
He married Mary Lambert on September 27, 1759. Mary went into early labor, which resulted in her death and the death of the baby.
On March 26, 1771, he married Elizabeth Olive. Towards the end of his life, he was cared for by a woman called Marguerite Brazier, who also took responsibility of burying him after his death. At the time of his death, many American newspapers published obituaries stating, ‘He had lived long, did some good and much harm’. In the end, only 6 people attended his funeral.
Much of Paine’s writings influenced a number of his contemporaries, philosophical peoples and freethinking radicals. Personalities such as Thomas Edison and Abraham Lincoln, defended Pains deism and his views on religion while others found it fit to attack his opinions.
A 12-foot marble column is erected in his memory at New Rochelle, New York. This site also houses the Thomas Paine Memorial Museum, which displays a number of his writings and his remainders. In England, a statue of Paine with an inverted copy of ‘Rights of Man’ is erected in Thetford, the place of his birth.
In Paris, there is a street that holds a plaque in his memory. In popular culture, Paine is mentioned in Bob Dylan’s song, ‘As I Went Out One Morning’ and his life was also dramatized in a play called, ‘Thomas Paine Citizen of the World’, in 2009. 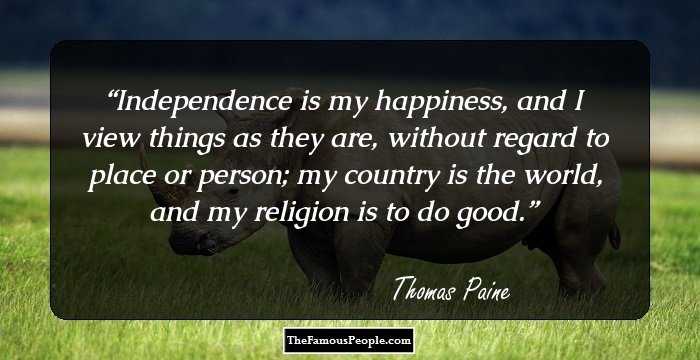 Quotes: Happiness, I
Trivia
William Cobbett, an English radical journalist, dug this famous English-American writer and pamphleteer’s bones from his grave and brought it back to England to give him a re-burial on home soil. However, this never happened, and the bones of this personality remained with Cobbett till after his death and some even became lost with time.
Recommended Lists:
Political Activists #58
Writers #814
Activists #313
Intellectuals & Academics #509
Leaders #771

Quotes By Thomas Paine | Quote Of The Day | Top 100 Quotes

See the events in life of Thomas Paine in Chronological Order