Advanced Search
Ken Wilber is one of the most important philosophers in the world today. He is the most widely translated academic writer in America, with 25 books translated into some 30 foreign languages. Wilber's philosophy has been influenced by Madhyamaka Buddhism, particularly as articulated in the philosophy of Nagarjuna. His integral approach gained popularity with the publication of his first book, The Spectrum of Consciousness, a synthesis of religion, philosophy, physics, and psychology which became the basis for all subsequent attempts at integrating psychology and spirituality. He supports the need for an integrated approach because in our current post-modern world, we possess an abundance of methodologies and practices belonging to a multitude of fields and knowledge traditions. In one of his most significant works, Sex, Ecology, Spirituality, in 1995, he introduced his iconic quadrant model often referred to as the AQAL model, with AQAL standing for all quadrants, all levels, all lines, all states, and all types. These five elements signify some of the most basic repeating patterns of reality. Integral Theory is widely ignored at mainstream academic institutions. Image Credit
https://www.instagram.com/p/B-10rvulY4V/
(getting to know)

American People
Philosophers
American Men
Duke University
Male Writers
Childhood & Early Life
Kenneth Earl Wilber II was born on January 31, 1949 in Oklahoma City. As an only child he had a relatively happy child hood as his parents allowed him to do largely as he pleased.
His father worked for the air force and the family never settled in one place for long which called for much adaptability on his part. He attended high school in Great Falls, Montana.
At high school, he was called ‘the brain’ for always topping the class which he did not relish as he was keen to be popular, and downplayed his intellectual talent.
In 1967, he enrolled as a pre-med student at Duke, but left it to complete a bachelor's degree in chemistry and biology and a master's degree in biochemistry from the University of Nebraska, Lincoln. 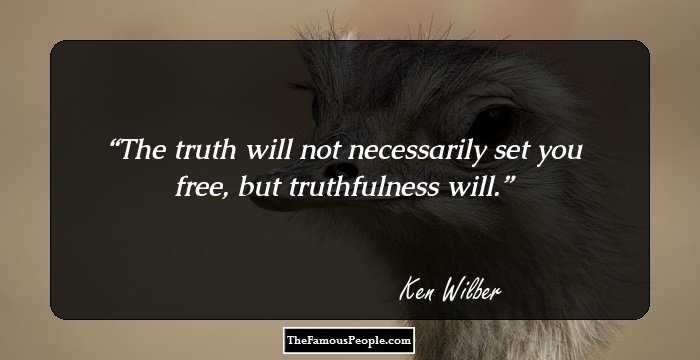 Quotes: You, Will
Continue Reading Below
Career
In 1973, Wilber completed his first book ‘The Spectrum of Consciousness’, a groundbreaking synthesis of religion, philosophy, physics, and psychology which became the basis for all subsequent attempts at integrating psychology and spirituality.
‘No Boundary’, published in 1979, is a simple and comprehensive guide to the types of psychologies and therapies available from Eastern and Western sources to help the reader understand their nature and practice.
‘The Atman Project’, published in 1980, traces human development from infancy into adulthood and beyond, into those states described by mystics and spiritual adepts and hints at the direction human beings takes toward transcendence.
In 1982, ‘The Holographic Paradigm and other Paradoxes’, a collection of essays and interviews, was published, and looked at how holography and the holographic paradigm relate to the fields of consciousness, mysticism and science.
A key idea in his approach is the holon. He observed that it seems every entity/ concept shares a dual nature: as a whole in itself, and as a part of some other thing. In his 1995 book ‘Sex, Ecology, Spirituality: The Spirit of Evolution’, he outlines approximately twenty tenets that characterize all holons. These tenets form the basis of Wilber's model of manifest reality.
He maintained a journal of personal experiences in 1997 journals and later (1999) published as ‘One Taste’, a term for unitary consciousness explained that body, mind, and the luminosities of the soul—all are perfect expressions of the Radiant Spirit.
In the groundbreaking 1997 book ‘The Eye Of Spirit’, he used the "spectrum of consciousness" model to rewrite our approach to such important fields as psychology, spirituality, anthropology, art, and planetary transformation.
‘Boomeritis: A Novel That Will Set You Free’, in 2002 introduced the concept of ‘Boomeritis’, a deadly combination of a modern liberal, egalitarian worldview and a unquestioned narcissism commonly held by Baby Boomers.
Published in 2004, ‘The Simple Feeling of Being’, a collection of spiritual passages, demonstrates his integral "theory of everything" and states that we are looking at Spirit or enlightenment, we just don't recognize it.”
Continue Reading Below
‘The Integral Institute’ was founded in 1998 by him to integrate the various viewpoints found in major fields of knowledge and has a number of branches including psychology, business, medicine, law, art, and spirituality.
In his thought-provoking 2006 work, ‘Integral Spirituality’, Wilber deepens his integral approach with a theory of spirituality and unites the truths of modernity and post modernity with the insights of the great religions.
His 2008 work ‘Integral Life Practice’ is a new approach to self-development and higher awareness, and also a way of making best use of insights, methods, and practices for cultivating a more enlightened life
In 2007, he co-founded ‘Integral Life’, a social media-hub dedicated to sharing the integral vision with the world wide community, as well as documenting and catalyzing the progress of the integral movement.
In 2012, he became the member of the Advisory Board of International Simultaneous Policy Organization which seeks to end the usual deadlock in tackling global issues through an international simultaneous policy. 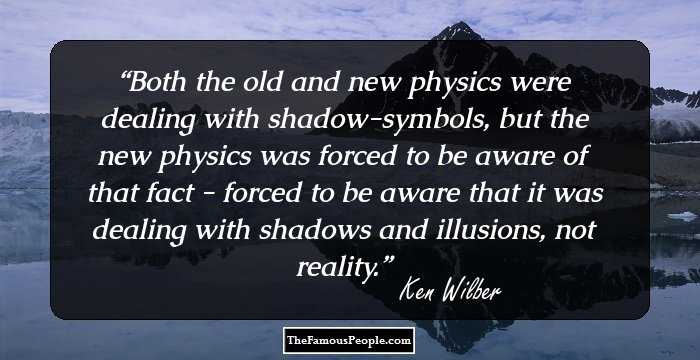 Major Works
‘Sex, Ecology, Spirituality’ or SES, his 1995 magnum opus, shows modern ‘philosophical naturalism’ insufficiency as an explanation of being, evolution, and the meaning of life and wants the vision-logic approach to replace modernism.
He introduced the iconic AQAL model, with AQAL standing for all quadrants, all levels, all lines, all states, and all types, signifying the most basic repeating patterns of reality and ensuring a comprehensive solution.
Awards
In March 2006, Ken Wilber declined the $10,000 Infinity Foundation Spirit Award stating that it would mean being associated with those who do not understand the meaning of inclusivity. 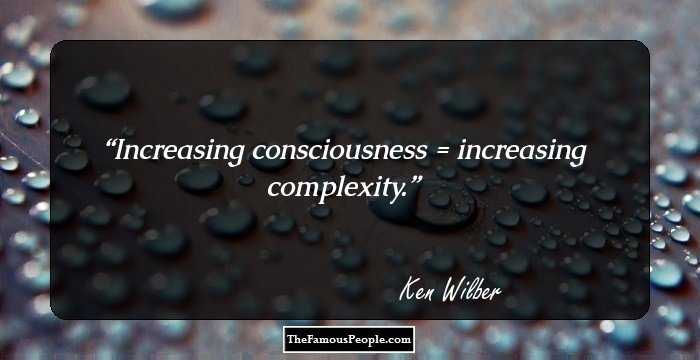 Personal Life & Legacy
Wilber married Terry "Treya" Killam who was shortly thereafter diagnosed with breast cancer. After Treya died in January 1989, their joint experience was recorded and published in the book, Grace and Grit.
He now lives in Denver, Colorado, and works at the Center for World Spirituality, which he co-founded. He has stated that he has a debilitating illness called RNase Enzyme Deficiency Disease.
Trivia
This American author who writes on psychology, philosophy, mysticism, ecology, and spiritual evolution and formulated the integral theory of consciousness declared, “What's my philosophy? In a word, integral”.
This American philosopher said "On my tombstone, I really hope that someday they will write: He was true but partial..."
Recommended Lists:
Intellectuals & Academics #1045

See the events in life of Ken Wilber in Chronological Order