Advanced Search
Thomas Keller is America’s most prized cook, restaurateur and a cook book writer. He is the only American chef to have been awarded simultaneous three star Michelin ratings for two different restaurants owned by him––for ‘Per Se’ and for ‘The French Laundry’. Keller started out young in the field of cooking and culinary skills - in fact, his love for cooking surfaced when he once worked as a chef at his mother’s restaurant in Florida. Soon, he started taking up chef positions at various restaurants in Rhode Island, where he met his mentor and French Master Chef Roland Henin. Henin taught him all that he needed to learn about classical French cooking and he left for New York from there, trying his luck at French fine dining restaurants. He finally gained success and recognition with his first famous restaurant, ‘The French Laundry’ - he earned many prestigious awards for it. From there onwards, Keller started one successful venture after other, becoming the American superstar of French cooking. He is also a cook book writer and has written books on his experiences with his different restaurants, covering the nuances of French cooking with it. David Burtka
DID WE MISS SOMEONE?
CLICK HERE AND TELL US
WE'LL MAKE SURE
THEY'RE HERE A.S.A.P
Quick Facts

American People
Male Chefs
American Chefs
American Food Experts
Libra Men
Childhood & Early Life
Thomas Keller was born on October 14, 1955 in Oceanside, California. His culinary skills perhaps come from the fact that his mother was a restaurateur herself and employed Keller in her restaurant when once her cook was sick.
His parents got divorced when Keller was a young boy and he moved with his mother to Palm Beach, Florida. As a teenager, he worked at the Palm Beach Yacht Club as a dishwasher first and then as a cook. 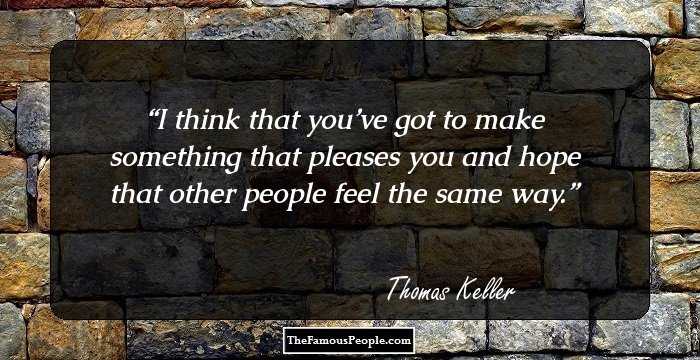 Quotes: You, Think, Hope, I
Continue Reading Below
Career
After his first professional stint with cooking at the Palm Beach Yacht, Keller explored his passion in cooking. He later took it up more seriously and moved to Rhode Island to work as a cook at a restaurant.
He was soon discovered by the French Master Chef, Roland Henin, who asked him to cook staff meals at The Dunes Club. After passing the test, Henin took him under his wings and taught him the basics of classical French cooking.
After learning the nuances of fine dining from Henin, Keller moved to various restaurants in Florida and finally settled down as a cook at a small French restaurant, La Rive in New York.
There Keller had the opportunity to experiment his creativity. He built a smokehouse to cure meats, developed relationships with local livestock purveyors and learned to cook entrails and offal from his guide, Henin, who still visited him.
After the unsuccessful attempt to buy off La Rive, Keller moved to different Michelin-starred restaurants in New York and then to Paris. He returned to the States in 1984 and started working as a chef at La Reserve in New York.
In 1987, after working for three years at La Reserve, Keller decided to open his own restaurant and named it ‘Rakel’. It was a refined and expensive Fresh cuisine restaurant that mainly served the elite class of New York.
‘Rakel’ failed financially in the long run and only received a two-star review from The New York Times. By the end of the 1980s, Keller had to compromise his style of cooking and turn Rakel into a simple bistro.
Dissatisfied with ‘Rakel’, Keller left the restaurant to his partner and took up consultant and chef positions at various restaurants in New York. But in 1992, things turned for good as Keller stumbled upon a creative idea.
He came across an old French steam laundry in California that had been converted into a restaurant. In order to own the place, he raised $ 1.2 million from investors and friends to be able to purchase the place.
Continue Reading Below
In 1994, Keller finally purchased his dream restaurant and worked hard to make it into a success. Over the next few years his restaurant, ‘The French Laundry’, received many awards - the James Beard Foundation, the Michelin Guide, etc.
With ‘The French Laundry’s’ success, Keller opened another restaurant, ‘Bouchon’, with his brother Joseph Keller in 1998. It was designed to serve reasonably priced French bistro type food. He also opened ‘Bouchon Bakery’ next door to the main restaurant.
Now established as a famous cook and restaurateur, Keller published his first cookbook, ‘The French Laundry Cookbook’. It won three International Association of Culinary Professionals awards for Cookbook of the Year, Julia Child "First Cookbook" Award, and Design Award.
In 2004, ‘Per Se’ was opened in the Time Warner Centre complex, New York. It became an instant hit amongst the New Yorkers and got enthusiastic reviews from ‘The New Yorker’ and ‘The new York Times’.
His latest restaurant ‘Ad Hoc’ was opened in 2006, in California, which serves comfort food and is meant for family dining. Although in the beginning it was meant to be a temporary project but due to its popularity, Keller kept it. 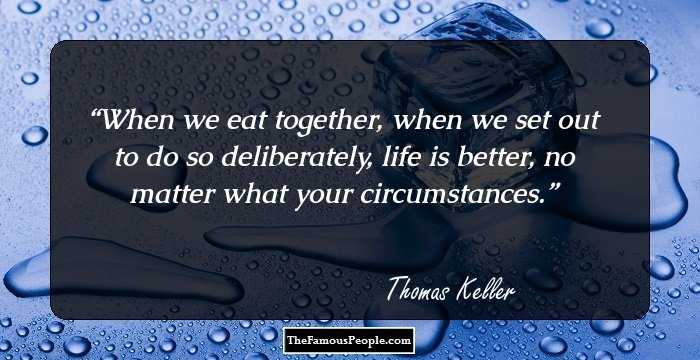 Quotes: Life, Together
Awards & Achievements
Besides being inducted into Culinary Hall of Fame, Keller has won: ‘Chevalier in the French Legion of Honor’, ‘Restaurant Magazine's Top 50 Restaurants of the World’s Lifetime Achievement’,’ Outstanding Wine Service Award’ and ‘Outstanding Service Award’ by James Beard Foundation, etc.
The most substantial work of Keller’s life is considered to be the setting up of his French fine dining restaurant, ‘The French Laundry’, in 1994. It earned him the success and recognition that was kick-started his cooking career.
Personal Life & Legacy
In 2009, Keller became engaged to his longtime girlfriend and former general manager at The French Laundry, Laura Cunningham.
Trivia
Keller’s dream project is to open a hamburger and wine place.
He is the president of the Bocuse d'Or U.S. team and was responsible for recruiting and training the 2009 candidates.
His other cook books are: ‘The Food Lover's Companion to the Napa Valley’, ‘Under Pressure: Cooking Sous Vide and Ad Hoc at Home’, etc.
He started a small olive oil company called EVO, Inc. in 1992, with his girlfriend of the time, to distribute Provençal-style olive oil and red wine vinegar.
He started marketing a line of signature white Limoges porcelain dinnerware by Raynaud called ‘Hommage Point’.

See the events in life of Thomas Keller in Chronological Order 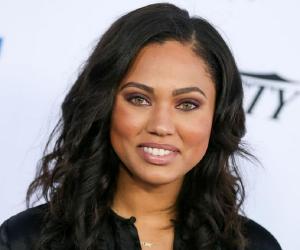