Advanced Search
Chris Fischer is an American chef and author, best known for his cookbook, ‘The Beetlebung Farm Cookbook: A Year of Cooking on Martha’s Vineyard.’ Chris made a name for himself early in his career, when he started working along with Chef Mario Batali in New York City’s popular Italian joint, ‘Babbo.’ Despite winning the prestigious ‘James Beard Award’ for his work as an author, Chris started hogging the limelight only after marrying the famous stand-up comedian and actress, Amy Beth Schumer. Chris and Amy got married on February 13, 2018, in Malibu, post which he started appearing in tabloids and social media more frequently than before. Born into a family of farmers, Chris Fischer went on to become a popular chef and is now the famous husband of a popular Hollywood actress. Christina Tosi
DID WE MISS SOMEONE?
CLICK HERE AND TELL US
WE'LL MAKE SURE
THEY'RE HERE A.S.A.P
Quick Facts

American People
Male Chefs
American Chefs
American Food Experts
Leo Men
Childhood & Early Life
Chris Fischer was born on August 19, 1980, in Chilmark, which is located at Martha’s Vineyard in Dukes County, Massachusetts, United States of America. He grew up in a 5.7-acre parcel of land, which was bought by his grandfather, Albert Oswald Fischer Jr., in 1961. Growing up in his grandfather’s Beetlebung Farm, Chris was presented with an opportunity to connect with nature and food right from his childhood. As he grew older, he started working on the farm along with the rest of the family members. He learnt the art of falling in love with food among many other subtleties of life on this farm. In one of his later interviews, Chris spoke about the importance of lunching and dining with family members, something which he learnt by being part of a huge family of farmers.
Continue Reading Below
Career
Chris Fischer initially worked as a farmer, working along with his family members on the Beetlebung Farm. Thereafter, he became a chef, and worked in restaurants like ‘Babbo,’ ‘The River Cafe,’ and ‘St John Bread and Wine.’ He then returned to Martha’s Vineyard and took over his family farm, where he started cooking privately. He then earned the opportunity to work at ‘Beach Plum Inn & Restaurant’ as the executive chef. While working at ‘Beach Plum,’ Chris won the ‘Coastal New England Rising Star Award’ for his work as a chef. He also got a rare opportunity to serve Barack Obama and his wife, Michelle, as ‘Beach Plum’ is one of Obama’s favorite restaurants. In his brilliant career as a chef, Chris has so far worked in top restaurants across the US, England, Japan, and Italy.
Other Endeavors
In 2015, Chris came up with a book titled ‘The Beetlebung Farm Cookbook: A Year of Cooking on Martha’s Vineyard,’ which was written along with Catherine Young. The book was based on his experience of cooking at the Beetlebung Farm. For his work as an author, Chris was honored with the prestigious ‘James Beard Award.’ Chris currently owns and operates the Beetlebung Farm. He is determined to turn the farm into something substantial and is working towards achieving his goal.
Personal Life
Chris Fischer was in a live-in relationship with Krishana Collins, who owns a flower studio in Martha’s Vineyard. After his break-up with her, he started dating Amy Schumer whom he had met through common friends. In November 2017, Chris and Amy went public about their relationship by posting an adorable picture on Amy’s official Instagram page. The couple entered wedlock on February 13, 2018, in a grand ceremony that witnessed the presence of famous Hollywood stars, including the likes of Jennifer Aniston and Jennifer Lawrence. 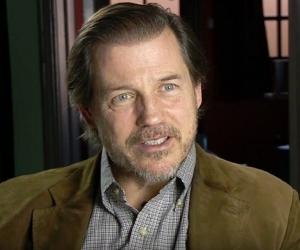