Marcus Samuelsson is an award-winning chef, restaurateur, cookbook author, food activist and philanthropist. He runs ‘Red Rooster’ restaurant in New York City's Harlem neighborhood and several other restaurants in the United States and Sweden. Samuelsson was born in Ethiopia, raised in Sweden and trained throughout Europe. When he was a child, his father warned him that as a black chef from Africa, establishing a career in the restaurant industry would be difficult and it was. One chef forced him to cook for his dog; he was insulted routinely in several different languages. Still he persevered. "It was my job to break down those barriers", Samuelsson said in a recent article for the ‘Associated Press’. "I carry many barriers, like being an immigrant, being from Africa. But it also gave me a focus and a work ethic. You have to be a little bit more precise".New York captured his heart because of the diversity the city offers. It's also where he found his wife. "New York City feels so much like home I almost feel like I grew up here", he says on his website. He loves to increase his knowledge about different foods and the dishes at ‘Red Rooster’ reflect that melding of cultures. To know more about his love of food read on American People
Restaurateurs
Reality TV Personalities
American Men
Male Chefs
Childhood & Early Life
Samuelsson was born ‘Kassahun Tsegie’ in rural Ethiopia on January 25, 1970. He was orphaned at an early age of two when his mother died of tuberculosis.
Kassahun and his older sister, Fantaye, had tuberculosis too. But fortunately they recovered and found a home, when Ann Marie and Lennart Samuelsson adopted the siblings and took them to Gothenburg, Sweden. The adoptive parents changed their names to Marcus and Linda and they grew up with an adopted sister, Anna.
Young Marcus had a happy childhood, although the racial slurs that were hurled at black children in the small town of Sweden were hard to take sometimes. He loved soccer. He also loved catching fish and preparing and preserving food when his family spent their summers in Smögen, on the coast of Sweden.
Marcus and Linda's biological father lived in his village with Samuelssons' eighteen half siblings. He reconnected with his biological father in 2000 and met those half siblings in Ethiopia. He financially supports the education of some of these relatives. 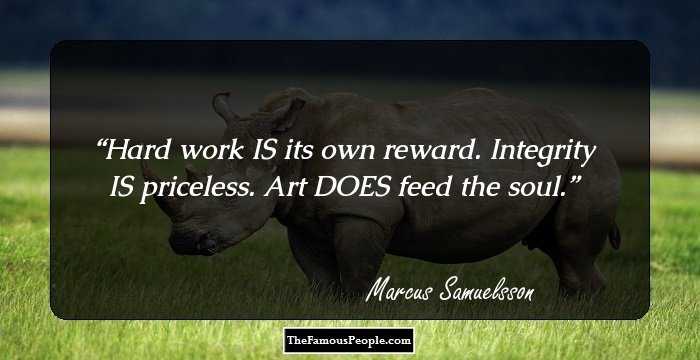 Quotes: Art, Soul
Continue Reading Below
You May Like

Who Is The Most Popular BTS Member?
Career
Marcus Samuelsson learned to cook beside his Swedish grandmother, Helga, a woman who had worked domestic jobs most of her life. Some of her homey specialties were roasted chicken, pickled vegetables and jams she made from lingonberries and apples.
After he graduated from the ‘Culinary Institute’ in Gothenburg, he apprenticed in Switzerland in 1989, then Austria and France before moving to the United States.
The Swedish restaurant ‘Aquavit’ in New York hired Samuelsson as an apprentice in 1994 and he worked his way up to executive chef. Under his management the restaurant earned three stars from ‘The New York Times’ in a few months. The following year, at 23 years old, he was the youngest chef ever to win a 3-star rating.
Gradually, Samuelsson evolved from a wunderkind of Scandinavian food to a culinary explorer who delved deep into his own roots. He learned about berbere spice mixes and how to make flat, spongy injera bread when he visited Ethiopia. Eventually he wrote a cookbook about African cuisine, titled 'The Soul of a New Cuisine: A Discovery of the Foods and Flavors of Africa'.
He was guest chef at the White House for the first state dinner of President Barack Obama's administration in 2009. The dinner, in honor of Indian Prime Minister Manmohan Singh, was largely vegetarian. Samuelsson used vegetables and herbs from the White House Garden and evoked Indian flavors in dishes like red lentil soup, roasted potato dumplings and green curry prawns.
In 2010 Samuelsson founded ‘FoodRepublic.com’ -- a website "for people who want to eat and drink well, and to live smart" -- and in December that year he tackled eclectic American roots cuisine at his own restaurant ‘Red Rooster’ and the downstairs speakeasy ‘Ginny's Supper Club’.
A fund raising event hosted at ‘Red Rooster’ in 2011 was graced by US President Barack Obama. The charity dinner organized for promotion of ‘National Democratic Party’ became a hit and $ 1.5 million were collected.
Starting in 2012, he ventured into the ‘Kitchen &Table’ concept of restaurants backed by the hospitality giants ‘Clarion Hotels’. He helped establish the first restaurant at Arlanda Airport and is currently involved in the ongoing projects at Sweden and Norway. 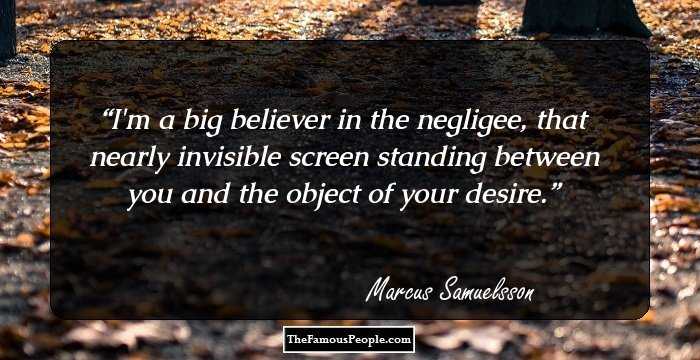 Quotes: You
Continue Reading Below
Major Works
The famous chef is also the author of numerous cookbooks which have received critical acclaim. 'The Soul of a New Cuisine: A Discovery of the Foods and Flavors of Africa' was honored with a ‘James Beard Award’ for ‘Best International Cookbook’ in 2007.
The chef also wrote, 'Aquavit and the New Scandinavian Cuisine', 'EnSmakresa med Marcus Samuelsson', 'New American Table' and 'Off Duty: The Recipes I Cook at Home' and 'Street Food’. His memoir 'Yes, Chef: A Memoir' with Veronica Chambers was nominated for a ‘James Beard Foundation’ award and featured in New York Times Bestseller.
Awards & Achievements
Samuelsson won ‘James Beard's Rising Star Chef Award’, in 1999.
He was named Best Chef, New York City in 2003.
In early 2010, he competed on Bravo's television series 'Top Chef Masters.' He won the competition and earned $115,000 for UNICEF's grassroots effort called ‘The Tap Project’. 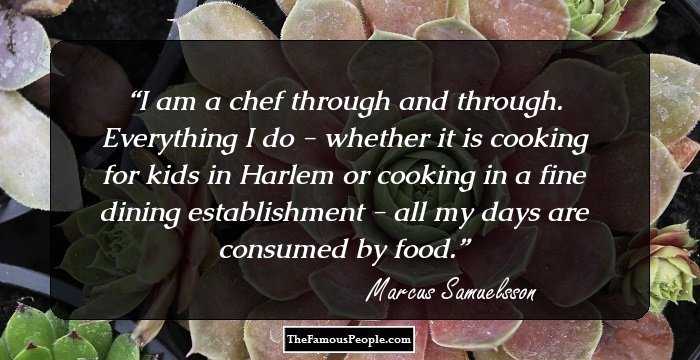 Quotes: I
Personal Life & Legacy
Samuelsson is a Visiting Professor of ‘International Culinary Science’ at the ‘Umea University School of Restaurant and Culinary Arts’ in Sweden.
He is an ambassador for the U.S. Fund for UNICEF and he is on the board of directors of the ‘Careers Through Culinary Arts Program’ in New York City.
He married professional model Gate Haile in Addis Ababa, Ethiopia, in 2009. Like Samuelsson, Haile was born in Ethiopia and raised in Europe. They live in a restored brownstone home in New York's Harlem neighborhood, near Red Rooster.
Trivia
As a youth Samuelsson's first love was soccer, but because of his small stature he had to give that up when he was in high school. He decided to concentrate on cooking and learning English
Recommended Lists:
Business People #943
Film & Theater Personalities #9736
Food Experts #89
You May Like

Quotes By Marcus Samuelsson | Quote Of The Day | Top 100 Quotes

See the events in life of Marcus Samuelsson in Chronological Order