Mick Jagger is one of the most influential artists in the history of rock and roll. This famous idol of rock and roll is not only a musician but also a songwriter, film producer, and actor. Known for his showmanship, Jagger is one of the greatest names in the world of music. He is also a founding member of the popular band ‘The Rolling Stones.’ Mick Jagger carved a niche for himself in the music industry and went on to inspire generations of rock and roll enthusiasts. Born into a typical middle-class family, he shared his passion for music with Keith Richards very early in his life. His unique vocal style and convulsive, often suggestive movements on stage, earned his band the reputation of being music industry’s scallywag, in contrast to the more orthodox band ‘The Beatles.’ During his heydays, he released a series of hits, including ‘Respectable’ and ‘Hot Stuff.’ Apart from his affiliation with the ‘Rolling Stones,’ he also had a stunning solo career, delivering many hit albums, such as ‘She’s the Boss,’ ‘Primitive Cool,’ ‘Wandering Spirit,’ and ‘Goddess in the Doorway.’ He was also a popular counterculture symbol, gaining much attention for his drug usage and on-stage notoriety. Harry Styles
26th July In History
DID WE MISS SOMEONE?
CLICK HERE AND TELL US
WE'LL MAKE SURE
THEY'RE HERE A.S.A.P
Quick Facts

Michael Philip ‘Mick’ Jagger was born on July 26, 1943, in Dartford, Kent, England, to Basil Fanshawe Jagger and Eva Ensley Mary. He is the eldest of the two sons born to the couple.

He began singing from a very young age and was a member of the church choir. In 1950, he became friends with Keith Richards at ‘Wentworth Primary School.’

The duo lost contact with each other and Jagger went on to graduate from ‘Dartford Grammar School.’ The two eventually resumed their friendship in 1960, and discovered that they both shared a common passion for rhythm and blues (R&B) music.

While Richards went on to form his own group with the guitarist, Brian Jones, Jagger went on to complete his education at the ‘London School of Economics,’ where he dreamt of becoming a politician or a journalist.
In 1962, the band ‘The Rolling Stones’ was formed, which comprised of Jagger as the lead vocalist and on the harmonica, Charlie Watts on the drums, Brian Jones on the guitar and keyboard, Bill Wyman on bass, and Keith Richards on guitar. 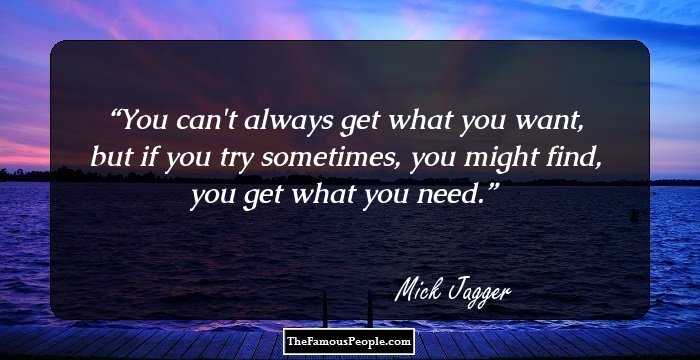 Quotes: You, Need, Trying
Continue Reading Below
Career
In 1964, ‘The Rolling Stones’ released their first self-titled record. The following year, they came up with a song titled ‘The Last Time,’ which peaked at number one on the UK charts, followed by ‘(I Can't Get No) Satisfaction.’

From 1966 to 1969, the band toured the world, performing great hits like ‘Let’s Spend the Night Together’ and ‘Sympathy for the Devil.’ During this time, one of their band members, Brian Jones, committed suicide.

Jones was quickly succeeded by Mick Taylor and the group went on to record ‘Let It Bleed’ in 1969. Two years later, they released one of their best albums, ‘Sticky Fingers,’ which included singles like ‘Brown Sugar’ and ‘Wild Horses.’

In the 1970s, Mick Jagger experimented with other genres of music, including punk and disco. The album, ‘Some Girls,’ which released in 1978, showcased different genres of music. Throughout the late-1970s, he went on a number of tours with ‘The Rolling Stones.’

In 1985, he decided to go solo and launched his debut solo album, ‘She’s the Boss.’ However, it wasn’t as successful as his earlier albums with ‘The Rolling Stones.’ During this period, his relationship with Richards also turned sour.
In 1987, he released his second solo album, ‘Primitive Cool,’ which was critically acclaimed but did not do well commercially. Two years later, ‘The Rolling Stones’ came back with a bang, with the album ‘Steel Wheels.’
In 1990, he released his third solo album, ‘Wandering Spirit,’ which became a commercial success and was featured on numerous popular charts. Five years later, he founded ‘Jagged Films’ with Victoria Pearman.

In 2001, Mick Jagger released ‘Goddess in the Doorway,’ which included the hit single, ‘Visions of Paradise.’ He also performed at a charity concert following the gruesome ‘September 11 attacks.’ The following year, he appeared in the movie ‘The Man from Elysian Fields.’

In 2007, ‘The Rolling Stones’ made a fortune while on their ‘A Bigger Bang Tour,’ which earned them a spot in the ‘Guinness Book of World Records.’ Two years later, he collaborated with ‘U2’ and performed ‘Gimme Shelter’ at the 25th ‘Anniversary Rock & Roll Hall of Fame Concert.’
Continue Reading Below
In 2007, he produced the comedy, ‘The Knights of Prosperity,’ which aired on ‘ABC.’ He was also seen in the first episode of the show.
In 2011, he formed a new supergroup called ‘SuperHeavy’ with band members, Joss Stone, A.R. Rahman, Damian Marley, and Dave Stewart. The same year, he appeared in the music video of ‘T.H.E. (The Hardest Ever)’ by Will.I.am. Additionally, he also appeared in the movie ‘Some Girls: Live in Texas ‘78.’

Mick Jagger performed at the ‘White House’ for former President Barack Obama along with a blues ensemble on February 21, 2012. He was also seen performing in a benefit concert named ‘12-12-12: The Concert for Sandy Relief’ along with ‘The Rolling Stones’ on December 12, 2012.

‘The Rolling Stones’ played at the ‘Glastonbury Festival’ in 2013. In the same year, Jagger teamed up with his brother Chris Jagger for two new duets for his album ‘Concertina Jack,’ which was released to mark the 40th anniversary of his debut album.
In July 2017, Jagger released the double A-sided single ‘Gotta Get a Grip’ / ‘England Lost.’
Jagger co-created and executive produced the period drama series ‘Vinyl’ (2016), which starred Bobby Cannavale and aired for one season on ‘HBO’ before its cancellation.
In September 2018, it was announced by ‘Variety’ that Jagger would portray an English art dealer-collector and patron in Giuseppe Capotondi’s thriller ‘The Burnt Orange Heresy.’ 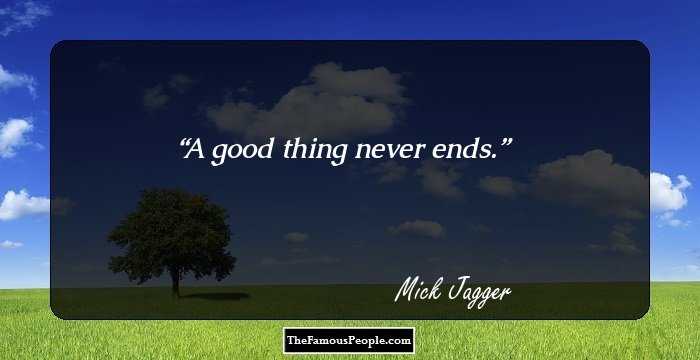 Major Works
‘Wandering Spirit,’ released in 1993, was Jagger’s third solo album which became a critical and commercial hit. It peaked at number 12 in the United Kingdom and at number 11 in the US. It was certified gold by the ‘RIAA.’ The single ‘Don’t Tear Me Up’ found moderate success and charted the ‘Billboard Album Rock Track’ for a week.
Continue Reading Below
Awards & Achievements

In 1989, Mick Jagger was inducted into the ‘Rock and Roll Hall of Fame.’

In 2002, he received a knighthood for his services to music.
He won a ‘Golden Globe Award’ for ‘Best Original Song’ for ‘Old Habits Die Hard’ in 2004. 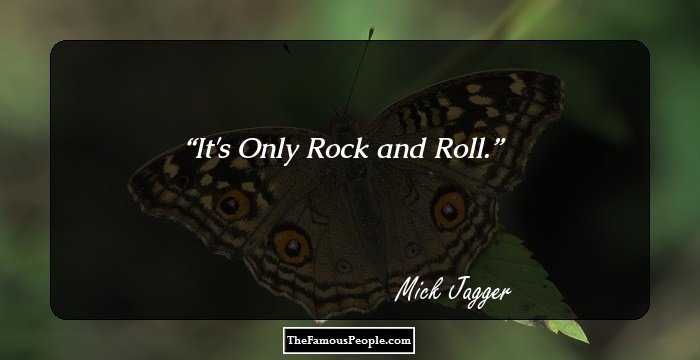 From 1966 to 1970, Mick Jagger had a relationship with Marianne Faithfull, an English singer-songwriter and actress.

He was in a relationship with Marsha Hunt from 1969 to 1970.
He married Nicaraguan-born Bianca De Macias on May 12, 1971. Bianca filed for divorce seven years later.
While still married to Bianca, he began dating Jerry Hall. The couple married on November 21, 1990, in a Hindu service on a beach in Indonesia. The marriage was negated nine years later.

Mick Jagger is a passionate cricket fan and founded the ‘Jagged Internetworks’ so he could get a full and immediate report on English cricket.

Along with Keith Richards, Jagger is a popular counterculture figure. He is best known for his sexually explicit lyrics and drug-related detentions.
Jagger’s vocal talent is recognized in Jay-Z’s single, ‘Swagga Like Us.’ He is also the subject of Maroon 5’s hit single, ‘Moves like Jagger.’
In 2010, Mick Jagger’s life was highlighted at the ‘Rencontres d’Arles,’ where a photo album showcased his development as a musician over five decades.
Trivia
A photo of this popular counterculture icon’s buttocks was sold at an auction house for $4,000.
He was supposedly tried for the role of Dr. Frank N. Furter in ‘The Rocky Horror Picture Show’ (1975).
‘The Rolling Stones’ was voted the fourth ‘Greatest Rock & Roll Artists’ of all time by the American magazine ‘Rolling Stone.’

Quotes By Mick Jagger | Quote Of The Day | Top 100 Quotes

See the events in life of Mick Jagger in Chronological Order