Keith Richards is an English guitarist, songwriter, singer, record producer, and member of ‘The Rolling Stones.’ Richards has written some of the greatest hit rock songs of all time. He remains one of the most internationally recognized and iconic figures of rock music and has influenced numerous young musicians. Apart from being a member of ‘The Rolling Stones,’ he has also toured with ‘The New Barbarians.’ Additionally, he has also been the front-man of the ‘X-Pensive Winos.’ Some of his hit albums include ‘Emotional Rescue,’ ‘Exile on Main St.,’ and ‘Goats Head Soup.’ He has also made cameo appearances in ‘Pirates of the Caribbean: At World's End’ and its sequels. In 2011, ‘Rolling Stone’ magazine ranked him fourth on its ‘100 Best Guitarists’ list. With an estimated net worth of $340 million, Richards is one of the wealthiest musicians in the U.K. British People
Guitarists
Rock Musicians
Record Producers
Lyricists & Songwriters
Childhood & Early Life
Keith Richards was born on 18 December 1943, in Dartford, Kent, England, to Bert Richards and Doris Dupree Richards.
As a young boy, he would often listen to recordings of Billie Holiday, Louis Armstrong, and Duke Ellington. He would then try playing their songs on his guitar.
He attended ‘Wentworth Primary School’ after which he went to ‘Dartford Technical High School for Boys’ until 1959. In high school, he was part of the school choir and sang at the Westminster Abbey for Queen Elizabeth II.
In 1959, he was expelled from ‘Dartford Technical High School’ on the grounds of ‘truancy’ after which he was sent to ‘Sidcup Art College.’ At ‘Sidcup,’ he spent most of his time playing guitar. After dropping out of college, he moved to London to become part of the amateur band ‘Little Boy Blue and the Blue Boys.’ 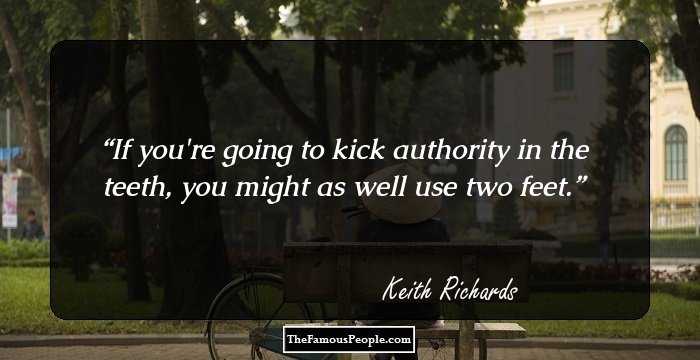 Quotes: You
Continue Reading Below
Career
In 1962, he became part of the rock band ‘The Rolling Stones.’ The band members at the time were Brian Jones, Ian Stewart, and Mick Jagger.
On July 12, 1962, the band played their first official gig at the ‘Marquee Club,’ a music club located at Oxford Street, London.
On June 7, 1963, the band released their first single ‘Come On.’ At this point, the band was not comfortable playing live gigs. In the autumn of 1963, the band recorded their second single titled ‘I Wanna Be Your Man,’ which was written by Lennon-McCartney.
In 1965, the song ‘I Can't Get No Satisfaction’ was released. The song was written by Richards and Mick Jagger. In 1968, Richards played the bass guitar for the song ‘Sympathy for the Devil.’ It served as the opening track of the album ‘Beggars Banquet’ which released the same year.
During the ‘Rolling Stones Tour’ in 1972, he performed as the lead vocalist for the song ‘Happy’ from the album ‘Exile on Main St.’ In 1973, the band released the hit album ‘Goats Head Soup’ which featured the hit single ‘Angie.’
In 1979, he joined The New Barbarians' tour, during which he played the keyboard. In June 1980, ‘The Rolling Stones’ released the hit album ‘Emotional Rescue’ which topped the charts in both U.S. and the U.K.
Between 1989 and 1990, the band went on a year-long worldwide tour and did 115 shows in the U.S., Japan, and Europe. In 2005, a collection of the band’s rare and limited-issue recordings was released. The collection was titled ‘Rarities 1971-2003.’
In 2007, he made an appearance in the film ‘Pirates of the Caribbean: At World's End’ in which he played the role of Captain Jack Sparrow’s father. He went on to reprise his role in the movie’s sequels ‘On Stranger Tides’ (2011) and ‘Dead Men Tell No Tales’ (2017).
In 2012, he paid tribute to fellow musicians Chuck Berry and Leonard Cohen at the ‘JFK Presidential Library’ in Boston, Massachusetts. The same year, he played the guitar at the ‘Rock & Roll Hall of Fame’ ceremony.
Continue Reading Below 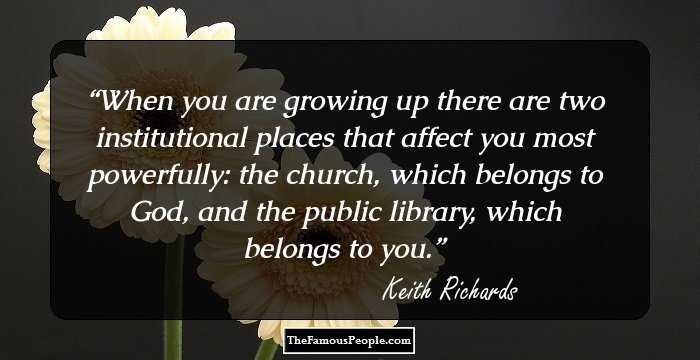 Quotes: You, God
Major Works
His hit single ‘I Can't Get No Satisfaction’ peaked at number one on many U.S charts and is considered one of the all-time greatest rock songs ever recorded. The song is ranked second on ‘Rolling Stone’ magazine’s list of ‘The 500 Greatest Songs of All Time.’
The 1980 album ‘Emotional Rescue’ was an instant hit on the music charts. The album reached the number one position in the U.K. and stayed at the top of the U.S. chart for seven weeks. In 2011, the album was re-released by ‘Universal Music Enterprises.’
The song ‘Angie’ from the album ‘Goats Head Soup’ peaked at the number one position on U.S. charts. It was also featured in the top 5 list in the U.K. The song was also a number one hit in Canada, Australia, and Europe. This song was frequently performed during the band’s concerts and tours.
Awards & Achievements
In 1993, he was inducted into the ‘Songwriters Hall of Fame.’
In 2009, he was ranked fourth in ‘Time’ magazine's list of ‘10 best electric guitar players of all time.’
In 2009, he was the recipient of the ‘Rock Immortal Award’ at Spike TV’s ‘Scream Awards’ held at the ‘Greek Theatre,’ Los Angeles.
Along with his band members, he was inducted into the ‘Rock and Roll Hall of Fame’ and ‘UK Music Hall of Fame’ in 1989 and 2004 respectively. 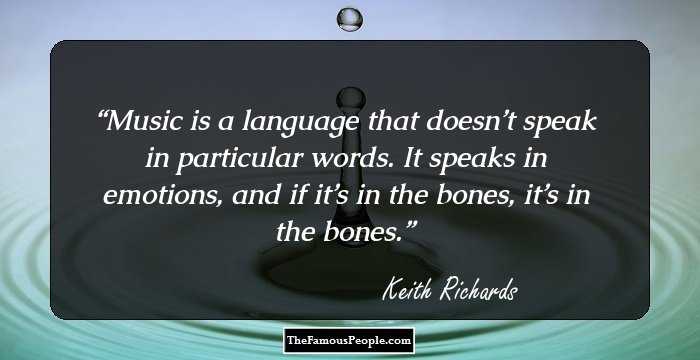 Quotes: Music
Personal Life & Legacy
Starting from 1967, he has been charged on drug related crimes on five occasions. He was imprisoned for a period of three months after he was caught with amphetamine tablets.
From 1967 to 1979, he was in a relationship with actress Anita Pallenberg. They have two children, though they never got married.
On December 18, 1983, he got married to model and actress Patti Hansen, and the couple has two children.
On April 27, 2006, he suffered a head injury for which he underwent surgery in New Zealand.
On October 26, 2010, his autobiography ‘Life’ was published. It was written with the assistance of journalist James Fox.
Trivia
This popular rock band guitarist owns one of the best and largest private collections of musical instruments which include thousand guitars of various makes.

Quotes By Keith Richards | Quote Of The Day | Top 100 Quotes

See the events in life of Keith Richards in Chronological Order