Advanced Search
Rosa Luxemburg was a German Marxist theorist, philosopher, economist and revolutionary socialist. She was of Polish-Jewish descent but became a naturalized German citizen. She was a member of the Social Democracy of the Kingdom of Poland and Lithuania, the Social Democratic Party of Germany (SPD), and the Independent Social Democratic Party (USPD). She was shattered when the SPD supported the German involvement in World War I. She and Karl Liebknecht co-founded the anti-war Spartacus League which eventually became the Communist Party of Germany (KPD). During the German Revolution, she founded the ‘Die Rote Fahne’ or ‘The Red Flag’, the Spartacus newspaper. During the Spartacus led uprising that broke out following the end of World War I, she and her supporters were captured and murdered. She realized that German militarism and imperialism would bring war which she wanted to prevent at all costs. She wanted to establish a dictatorship of the proletarian but she was not in favor of Lenin’s idea of one-party Bolshevik government that came to power by force. She wanted the workers to unite and come to power. She also realized that revolutions could happen not only in industrialized nations, but also in underdeveloped countries. As a young revolutionary and feminist, she challenged mindsets that stereotyped women. Her life is still an inspiration for socialists all over the world. Theodor W. Adorno
DID WE MISS SOMEONE?
CLICK HERE AND TELL US
WE'LL MAKE SURE
THEY'RE HERE A.S.A.P
Quick Facts

German Celebrities
Polish Celebrities
Economists
Philosophers
Revolutionaries
German Women
Childhood & Early Life
Rosa Luxemburg was born on March 5, 1871, into a Jewish family, toLuxemberg and Line Lowenstein. Her father was a timber trader. At the age of five, she suffered a hip ailment which left her with a lifelong limp.
Her family moved to Warsaw where she studied at Warsaw’s Second Gymnasium for Girls, between 1880 and 1887. During graduation, she was denied the topper’s gold medal because of her rebellious attitude.
In 1889, she went to study at Zurich University in Switzerland. Here she pursued history, economy, politics and philosophy.
She submitted her doctoral dissertation, ‘The Industrial Development of Poland’, in 1897 which was published a year later, and received her Doctor of Law degree. 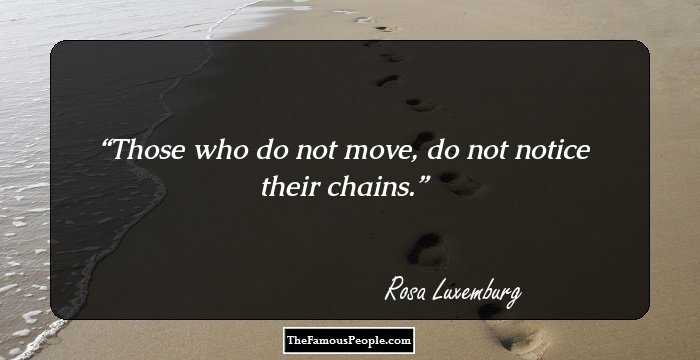 Polish Women
Pisces Leaders
Women Leaders
German Leaders
Career
Rosa Luxemburg’s political career began while she was in Poland as member of the left-wing Proletariat Party. In 1893, in collaboration with Leo Jogiches and Julian Marchle, she started the newspaper, ‘Sprawa Robotnicza’ (‘The Workers' Cause’).
Soon Leo Jogiches and Luxemburg established the Social Democratic Party of the Kingdom of Poland, which later came to be known as the Social Democracy of the Kingdom of Poland and Lithuania, SDKPiL, after they joined hands with Lithuania's social democratic organization.
Published in 1904, her work ‘Organizational Questions of the Russian Social Democracy' opposed Lenin's theories. She believed a communist dictatorship would develop if power was centralized with the Party Central Committee.
During the failed Russian Revolution in 1905, she was arrested along with Jogiches in Warsaw. She realized that revolutions could happen not only in an advanced industrialized country, but also in an underdeveloped country.
At the Second International (Socialist) Congress in Stuttgart in 1905, she introduced a resolution, according to which all European workers' parties were to come together to prevent the war.
She started teaching Marxism and economics at the Social Democratic Party’s Berlin training centre. Here Friedrich Ebert who also attended her lectures here went on to become SPD leader and first president of the Weimar Republic.
In 1912, while she was representing SPD at the European Socialists congresses she appealed to the European workers' parties to declare a strike in the face of the impending war.
When World War I broke out in 1914, she was shattered when the SDP and the French socialist agreed to a truce promising to refrain from any strikes.
She organized anti-war demonstrations in Frankfurt against military conscription. For her refusal to obey orders, she was jailed for "inciting disobedience against the authorities' law and order".
Continue Reading Below
In August 1914, she established the ‘Die Internationale’ where her associates were Karl Liebknecht, Clara Zetkin and Franz Mehring. The organization later evolved into the ‘Spartacus League’. The organization was responsible for releasing illegal anti-war pamphlets, under the pseudonym ‘Spartacus’.
Contrary to the SPD, ‘The Spartacist League’ was strongly against the war and called for an anti-war general strike. These strikes didn’t go down well with the authorities and she was arrested and put into prison in 1916, along with Karl Liebknecht for more than a couple of years.
She was released in 1918, and with Liebknecht revived the Spartacus League and also established the ‘Red Flag’ newspaper which advocated pardon for all political prisoners and asked for the capital punishment to be revoked.
In 1919, when Berlin was on the verge of another revolution, she denounced the fierce attempts of Liebknecht to snatch power. However, the members of the Red Flag asked the rebels not to renounce their respective positions at the editorial offices of the liberal press.
After Germany's new chancellor Friedrich Ebert came to power, he issued an order to eradicate the left-wing revolution. Both Liebknecht and Luxemburg were arrested in Berlin on 15 January, 1919. 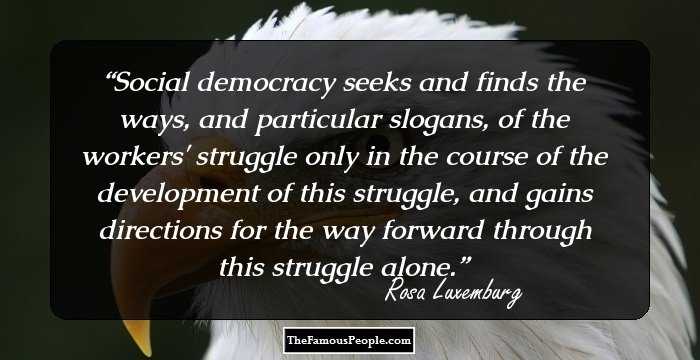 Polish Leaders
Women Activists
Polish Activists
Women Economists
Major Works
In, 'The Militia and Militarism' published in 1899, Rosa Luxemburg reproached German militarism and imperialism strongly. In the face of the impending war she appealed the workers to come together in order to prevent the war.
In 1916, while in prison, she wrote the article ‘The Russian Revolution’, criticizing the Bolsheviks and Lenin for using force to overthrow the Russian government. She called for a "dictatorship of the proletariat"
Recommended Lists:

German Activists
German Economists
Polish Economists
Women Philosophers
Personal Life & Legacy
In 1898, Rosa Luxemburg got married to Gustav Lübeck. It was a ‘marriage of convenience’ and she left Zürich University and became a German citizen. The couple got separated five years later.
Following her capture in 1919, she was murdered and her body was discarded into Berlin's Landwehr Canal. A few months later her body was recovered and identified after an autopsy.
She was laid to rest alongside her ‘Spartacus League’ colleague Liebknecht at Friedrichsfelde Central Cemetery in Berlin. Every second Sunday of January there is a commemorative service organized by the socialists and communists.
In 1919, Bertolt Brecht, a German poet and Marxist, composed the poetic memorial Epitaph in recognition to her contributions. Kurt Weill, a German composer set it to music known as ‘The Berlin Requiem’. 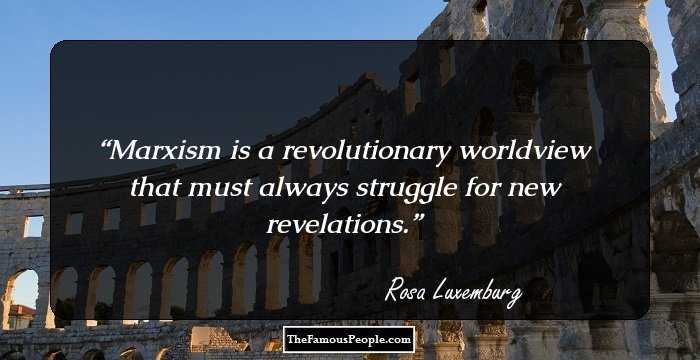 Quotes By Rosa Luxemburg | Quote Of The Day | Top 100 Quotes

See the events in life of Rosa Luxemburg in Chronological Order