Robert Mugabe was a former revolutionary and Zimbabwean politician best known for his struggles against the British, when Zimbabwe was known as Rhodesia. He was greatly inspired by Marxist and nationalist views from a young age, and became the publicity secretary of the National Democratic Party or the ‘NDP’. Once he established a strong political foothold, he founded the socialist-nationalist movement, ‘ZANU’ which resolved to drive the British out of their homeland. Soon after their independence, Mugabe became the prime minister and thereafter the president of the country - the post he held till November 21, 2017. During his tenure as president, he managed to unite the Zimbabwe African People’s Union (ZAPU) with the Zimbabwe African National Union (ZANU), challenging all those who threatened to colonize independent Zimbabwe. Though he ruled Zimbabwe for long, opposition to his rule began to grow due to his policies. His electoral campaigns were said to be dominated by electoral fraud, and violence. Following a coup in November 2017, Mugabe was forced to resign the presidency.
Continue Reading Below awards: 1994 - Knight Grand Cross in the Order of the Bath for significant contributions

Zimbabwean Celebrities
Black Presidents
Revolutionaries
Prime Ministers
Political Leaders
Childhood & Early Life
Robert Gabriel Mugabe was born on February 21, 1924 as the third of the six children to Gabriel Matibili and Bona, both of whom were Roman Catholic. His elder brothers died when he was very young and in 1934, his father deserted the family.
He studied in all-exclusive Jesuit, Roman Catholic schools and also attended the Kutama College, where he is believed to have led a solitary life and preferred to keep company with his books.
He was meant to become a teacher but then decided to study at Fort Hare in South Africa, from where he graduated in 1951. He then went on to study at Salisbury, Gwelo, Tanzania and subsequently earned six more degrees in addition to his Bachelor of Arts degree, which he obtained from the University of Fort Hare.
After graduation, he became a lecturer at Chalimbana Teacher Training College in Northern Rhodesia between the years 1955 to 1958. It was around this time he was highly influenced by Marxist works and by the-then Prime Minister of Ghana, Kwame Nikrumah. 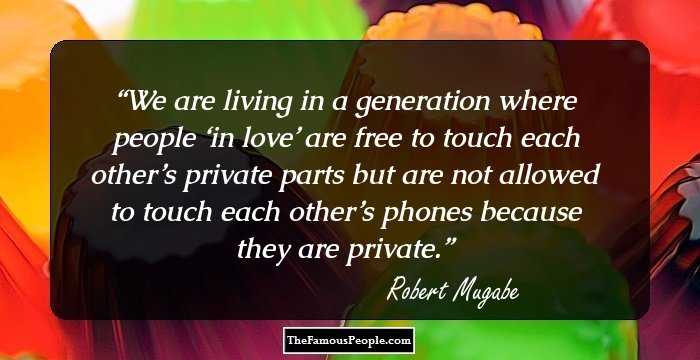 The Hottest Male Celebrities With The Best Abs
Career
In 1960, he joined the National Democratic Party and he formed the group 'Zimbabwe African Peoples Union' (ZAPU), after it was banned in September. ZAPU was led by Joshua Nkomo.
In 1963, he left ZAPU and formed the Zimbabwe African National Union (ZANU), established on the basis of Africanist philosophies of the Pan Africanist Congress in South Africa.
Both ZANU and ZAPU were officially banned on August 26, 1964 after a long spell of political unrest. It was during this time that Mugabe was arrested and imprisoned indeterminately.
In 1974, while still in confinement, he was elected to take over ZANU. The same year, he was released from prison along with other separatist leaders, so that he could go to a conference in Lusaka, Zambia.
He fled back to the border of Southern Rhodesia and accumulated a troop of Rhodesian rebel trainees. The struggle continued through the 1970s and the economy of Zimbabwe went in a state of pandemonium.
In 1979, the British colonies agreed to observe the switch to black majority rule and the UN raised sanctions. The subsequent year, Southern Rhodesia gained independence from the British and became the independent Republic of Zimbabwe.
On March 4, 1980, ZANU won 57 out of 80 Common Roll Seats and Mugabe was elected to lead the first government as prime minister. After his election, he attempted to build Zimbabwe on the foundation of an edgy union with his ZAPU rivals.
In 1981, a war broke out between ZANU and ZAPU. Four years later, Mugabe was re-elected and the fight persisted.
After the murder of two ministers in 1987, Mugabe and Nkomo decided to merge their unions, for the betterment and quick recovery of Zimbabwe’s economy.
Continue Reading Below
The position of prime minister was obliterated and Mugabe assumed the new office of the executive President of Zimbabwe in 1987. He chose Nkomo to become one of the senior ministers. Two years later, he implemented a five-year plan, which greatly benefited the economy.
In 1996, political unrest began to surface again and his followers, who deemed Mugabe as their hero, began to resent their decision, because they did not support many of his political strategies.
He passed a revision in 2000, wherein the amendment stated that Britain would have to pay compensations for seizing land from the blacks and if the British failed to do so, Mugabe would in turn, seize theirs.
In 2002, he won the presidential elections at a time when the economy of Zimbabwe was in near ruins with widespread unemployment, famine and AIDS and fought to keep his office through brute force. This helped him win the parliamentary elections also, three years later.
He lost the presidential elections to Morgan Tsvangirai in 2008, but refused to let go of his office and demanded a recount of the votes. In order to gain more votes, he went as far as violently attacking or killing members of the opposition party. This sudden outburst by Mugabe and his followers led to another deadly outbreak, resulting in bloodshed and loss of many lives.
After lots of bloodshed, Tsvangirai and Mugabe came to a mutual agreement that they both would share the power. In 2010, he selected provisional governors for Zimbabwe without consulting Tsvangirai, which proved that he did not want to share power.
The next year, he announced his bid for the 2012 presidential elections, which was postponed to 2013.
He displayed his interest to challenge Tsvangirai once again in the elections and in July 2013, when he was asked about his plans to run for the presidential post in future, he mentioned that he would like to rule Zimbabwe till he hit a ‘century’.
Zimbabwe’s election commission declared Mugabe as the winner of the presidential elections in August 2013 after he won 61 per cent of the votes.
Continue Reading Below
On November 15, 2017, the Zimbabwe National Army in an apparent coup d'état placed Robert Mugabe under house arrest. Thereafter on 19 November, he was removed as the leader of ZANU-PF. An impeachment proceeding was started against him. Following the start of impeachment proceedings, Mugabe resigned as President on 21 November 2017.
Major Works
When he was elected the President of Zimbabwe, he decided to implement a five-year plan, starting from 1989. In the course of this five-year plan, he loosened price limits for farmers, allowing them to set their own prices and he also built a number of clinics and schools for the people. By the end of the five year period, the economy had seen drastic positive change in manufacturing, mining and farming industries.
Awards & Achievements
He held a number of degrees and doctorates from international universities, all of which were presented to him through the 1980s.
He was elected as a UN ‘Leader of Tourism’.
Personal Life & Legacy
He tied the knot with Sally Hayfron in April 1961. The couple was blessed with a son who died at the age of three after suffering from cerebral malaria.
His wife died of a kidney problem in 1992. At the time of her death, Mugabe was already in a parallel relationship with his former secretary, Grace Marufu, who was married to someone else and was 41 years younger to Mugabe.
He married Grace Marufu on 17 August 1996. He already had two children with Grace when he married her. She initially became pregnant when he was still married to his first wife, Sally. His wife is sometimes mockingly called, ‘Gucci Grace’ for her ostentatious ways and lifestyle.
Robert Mugabe died on 6 September 2019 at a hospital in Singapore
Trivia
While Robert Mugabe was still in prison, he received three honorary degrees; two Law degrees and a Master of Science degree.
He won a first prize jackpot of Z$100,000, in 2000. All the clients with more than Z$ 5,000 in the ZimBank account were eligible for the lottery.
The film ‘The Interpreter’ featured a deleterious portrayal of a fictional African ruler, which in many ways fits Mugabe’s character in real life. His government later described the film as a ‘CIA-campaign against Robert Mugabe’.
Recommended Lists:
Prime Ministers #114
Leaders #2546
You May Like

See the events in life of Robert Mugabe in Chronological Order