Alexander Hamilton Stephens was an American politician who had served as the vice president of the ‘Confederate States of America.’ He was born Alexander Stephens but later adopted “Hamilton” as his middle name to honor his mentor, Alexander Hamilton Webster. After losing his parents at 14, he grew up amidst poverty. However, with the help of the support from his uncle, mentor, and other well-wishers, he educated himself to become a successful lawyer. He entered politics at a tender age and dabbled with different political parties until the 1860s. In the 1850s, as the movement of the Southern states (which practiced slavery) to secede from the ‘Union’ and form the ‘Confederate States of America’ gained strength, he was initially opposed to it. Later, he, too, supported it and went on to become the vice president of the ‘Confederate.’ The Civil War followed, and at the end of the war, he was arrested. However, he was released after 5 months, owing to a presidential pardon. American People
American Men
University Of Georgia
Male Leaders
Aquarius Leaders
Childhood & Early Life
Stephens was born on February 11, 1812, in Crawfordville, Georgia, U.S., to Margaret Grier and Andrew Baskins Stephens.
Three months into his birth, he lost his mother. Two years later, his father married Matilda Lindsay. Unfortunately, he lost both his father and stepmother to pneumonia in May 1826 and was pushed to abject poverty.
He was then raised by Margaret’s brother, General Aaron W. Grier, in Raytown, Georgia. There, he developed the habit of reading by spending time at the library inherited by his uncle.
He was able to continue his education due to the financial aid provided by several generous people, including Alexander Hamilton Webster, a ‘Presbyterian’ minister. Webster was the president of a school in Washington, Georgia. He turned into Stephens’s mentor. As a mark of respect for Webster, Stephens adopted his middle name.
Stephens graduated from ‘Franklin College’ in 1932, ranking first in his class. Being a voracious reader, he was a member of the ‘Phi Kappa Literary Society’ at the college and was even actively involved in raising money for the construction of the ‘Phi Kappa Hall’ on the campus.
For the next 2 years, he worked as a teacher but found no satisfaction in the job. Hence, he quit and enrolled into a law course. He was admitted to the bar association of Georgia in 1834. He started his practice in Crawfordville, Georgia. 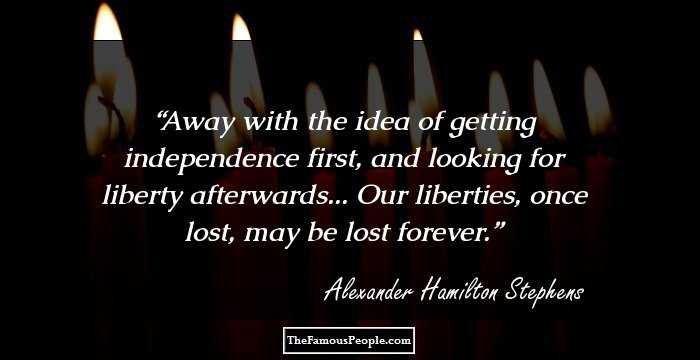 Continue Reading Below
Elections before the Civil War
Stephens stepped into politics in 1836. He became a member of the ‘Whig Party’ and won the elections to the ‘Georgia House of Representatives.’ He served in this position until 1841. The following year, he was elected to the Georgia State senate.
After Mark Anthony Cooper’s resignation from the congressional seat in 1843, Stephens won the district elections and remained in the seat until it was abolished in 1845. Between 1845 to 1851, he represented the 7th district of Georgia at the ‘U.S. House of Representatives,’ as a ‘Whig.’ However, from 1851 to 1853, he was elected from the same 7th district as a member of the ‘Constitutional Union Party.’ In 1853, he returned to the ‘Whig Party’ and won the elections from the 8th district. However, in the next two terms, he won the elections as a member of the ‘Democratic Party.’ He served as a lawmaker for a little more than one and a half decades. 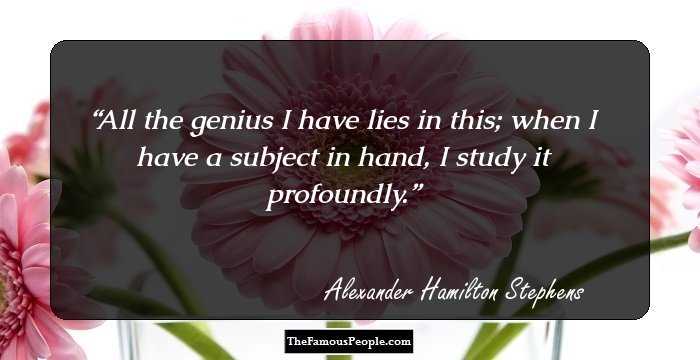 Quotes: I
Actions as a Congressman before the Civil War
In 1845, as a member of the ‘House of Representatives,’ Stephens stood in favor of the annexation of Texas with the United States of America.
He strongly resisted the ‘Mexican War’ that took place between 1846 and 1848 and the proposal for the ‘Wilmot Proviso,’ following the end of the war.
In 1848, his tabling of the ‘Clayton Compromise’ became a controversial move. Stephens’s action angered the ‘Whigs’ from the South, especially the associate justice of the ‘Supreme Court of Georgia,’ Francis Hiram Cone. They got into a duel at ‘Thompson’s Hotel’ in Atlanta. Stephens was almost fatally injured. During the skirmish, his right hand was hurt, and it failed to recover completely.
In 1850, Stephens and his lifelong friend, Robert Toombs, were upset with the way President Zachary Taylor handled the “Compromise of 1850.” The duo was not in agreement with a few aspects of the bill and got involved in drafting the ‘Georgia Platform’ as a response to the bill.
During this time, differences surfaced between the ‘Whigs’ of the North and the South. Hence, he quit and joined the ‘Constitutional Union Party,’ becoming a ‘Unionist.’ However, the prevailing political situation led to the weakening of the party, causing it to dissolve in 1861.
Stephens returned to the ‘Whig Party’ in 1853. The following year, he played a vital role in the enactment of the ‘Kansas-Nebraska Act’ by gaining the support of the ‘Democrats.’ According to him, this moment was “the greatest glory of my life.” Gradually, his loyalty shifted toward the ‘Democratic Party,’ and he supported their cause despite being a ‘Whig.’
Continue Reading Below
For the terms in 1855 and 1857, he contested as a ‘Democrat.’ Within a short time, he earned essential positions within the ‘Democratic Party.’ He did not contest the elections of 1858.
The Civil War and His Tenure as the Vice President of the Confederate States
The movement for the secession of the Southern states had gained substantial momentum by the late 1850s. Although Stephens supported slavery, he was opposed to the idea of breaking away from the ‘Union.’
Initially, he tried his best to prevent the secession, but when the Northern states moved to annul the ‘Fugitive Slave Law,’ he changed his mind. The Southern states seceded and formed the ‘Confederate States of America’ in February 1861.
He was voted to the ‘Confederate Congress’ and was appointed as the provisional vice president on February 11, 1861. He became the full-term vice president on February 22, 1862, after winning the elections in November 1861. He stayed in power until his arrest on May 11, 1865.
He delivered the famous ‘Cornerstone Speech’ on March 21, 1861, in Savannah, Georgia, stating “Our new Government is founded upon exactly the opposite ideas; its foundations are laid, its cornerstone rests, upon the great truth that the negro is not equal to the white man; that slavery, subordination to the superior race, is his natural and normal condition."
He was vocal about his differences with Jefferson Davis, the president of the ‘Confederate,’ and made it public in 1862. He was opposed to Davis’s policies, such as conscription, suspension of the writ of habeas corpus, impressment, economic plans, and his defense strategies.
In the middle of 1863, upon the insistence of Davis, he left for Washington to negotiate prisoner exchanges. However, the ‘Union’ refused to cooperate, as they had just won the Battle of Gettysburg.
In his speech to the ‘Georgia Legislature’ on March 16, 1864, he vehemently expressed his opposition to the strategies of Davis. This speech was covered widely by the media both in the North and the South. This event finally ended the relationship between Davis and Stephens.
As one of the three members of the ‘Confederate Commissioners,’ he met Abraham Lincoln, the president of the United States of America, on the steamer ‘River Queen,’ to put an end to the war and to restore peace. However, the negotiation failed. Nevertheless, he was able to convince Lincoln to release his nephew, Lieutenant John A. Stephens.
Continue Reading Below
On May 11, 1865, Stephens was arrested at his home in Crawfordville for treason against the U.S.A. He was imprisoned for 5 months at Fort Warren, Boston Harbor. 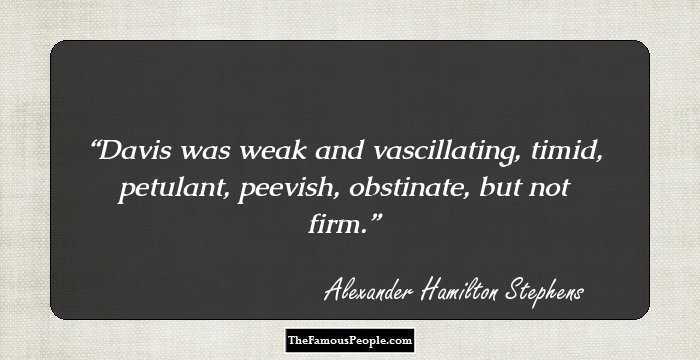 Quotes: War
After the Civil War
He was elected to the senate in 1866 but was not permitted to represent due to the restrictions on past ‘Confederates.’
Between 1868 and 1872, he authored many works, such as ‘A Constitutional View of the Late War Between the States; Its Causes, Character, Conduct and Results’ and ‘A Compendium of the History of the United States from the Earliest Settlements to 1872.’ With these compositions, he gave a different narrative to the Civil War, justifying the causes of the war.
In 1873, after the death of the representative of the 8th district, Ambrose Ransom Wright, he was voted to the ‘House of Representatives’ from the same seat, as a ‘Democrat.’
He represented the district as an independent ‘Democrat’ in 1874, 1876, and 1878. In the 1880 term, he represented the district again as a ‘Democrat.’ He resigned on November 4, 1882, after being appointed as the governor of Georgia. He served in this role until his death.
Family, Personal Life & Death
Though Stephens was 5 feet and 7 inches tall, he never weighed more than 100 pounds. He was small in stature and was called “Little Ellick” by his colleagues and friends. His size was a major disadvantage during his public brawl with Cone.
He was often ill. He had rheumatoid arthritis and a pinched nerve in his back. He passed away on March 4, 1883. There are rumors that he was bedridden due to an accident at his home.
Legacy
Georgia and Texas both have counties named ‘Stephens County,’ in his honor.
The ‘A.H. Stephens State Park’ in Crawfordville was built around his residence.