Widely revered as 'one of the most influential theologians of the 20th century', Paul Tillich was a Christian existentialist philosopher and theologian. He was one of the philosophers who explored the true meaning of the Christian faith in correlation with the 'philosophical analysis of human existence' and played a pivotal role in revolutionising Protestant theology. His seminal works include, ‘The Courage to Be' and,' Dynamics of Faith', both of which brought forth the issues relating to theology and modern culture to the masses and general readers. On the other hand, his magnum opus, the three volume, 'Systematic Theology', introduced the ‘method of correlation’. This enabled the exploration of the various symbols in 'Christian revelation', as explanations to ‘man's deepest questions’. He taught as a professor at the Dresden University of Technology, University of Leipzig, University of Frankfurt, Union Theological Seminary in New York, Harvard Divinity School and the University of Chicago. However, it is also important to note he has also received criticisms for his theories. Nevertheless, his work has made a considerable impact in the field of theology. Max Stirner
Philosophers #200
Theologians #13
Intellectuals & Academics #137
DID WE MISS SOMEONE?
CLICK HERE AND TELL US
WE'LL MAKE SURE
THEY'RE HERE A.S.A.P
Quick Facts

American Celebrities
German Celebrities
Philosophers
American Men
German Men
Male Philosophers
Childhood & Early Life
Paul Tillich was born in Starzeddel, Germany to Johannes Tillich, a conservative Lutheran pastor and Mathilde Durselen. After his father became superintendent of a diocese in Bad Schonfliess, the family moved there.
He was educated at the elementary school in Bad Schonfliess. He later went on to attend the ‘gymnasium’ school, where he studied as a boarder. During his time in the ‘gymnasium’school, he started reading the Bible to overcome loneliness.
From 1900, after his father got transferred to Berlin, he began attending a Berlin school, from where he eventually graduated. He lost his mother before he graduated, when he as just 17.
He attended the University of Berlin, the University of Tubingen and the University of Halle-Wittenberg. He obtained a Doctor of Philosophy degree from the University of Breslau.
In 1912, he obtained his Licentiate of Theology from the Halle-Wittenberg. The same year, he obtained ordainment as a Lutheran minister in the Province of Brandenburg. 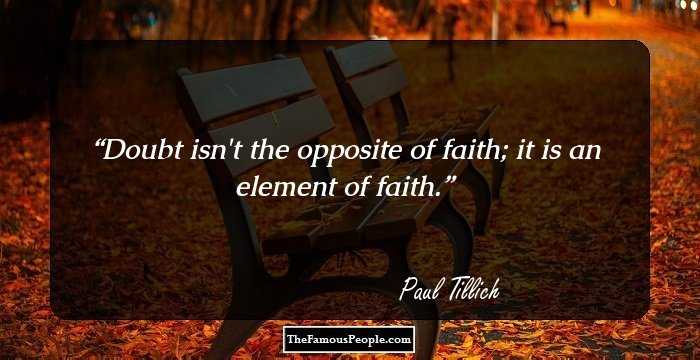 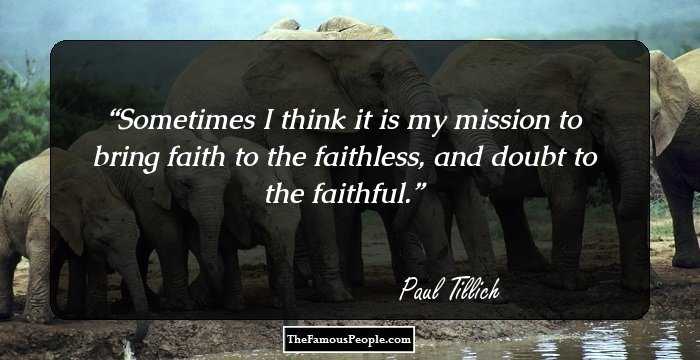 Quotes: Think, I
Major Works
His three-volume magnum opus ‘Systematic Theology’ is regarded as one of the most profound works in Christian theology. In this series he attempts to answer, ‘man's deepest questions’.
Personal Life & Legacy
In 1914, he married a woman named Margarethe Grethi Wever. She later conceived a baby from another affair and the couple separated in 1919 and eventually divorced.
In 1924, he married his second wife, Hannah Werner-Gottschow.
He died at the age of 79, due to a heart attack he had suffered ten days ago. He was laid to rest at the Paul Tillich Park in New Harmony, Indiana. 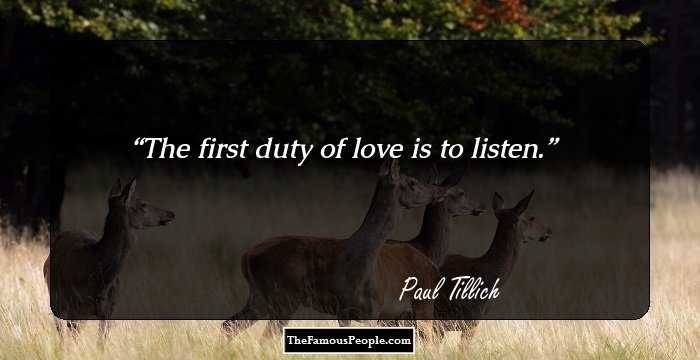 Quotes By Paul Tillich | Quote Of The Day | Top 100 Quotes

See the events in life of Paul Tillich in Chronological Order