The great yogi Paramahansa Yogananda is regarded as one of the foremost spiritual figures of modern times. Native to India, this guru emigrated to the U.S. where he taught and practiced spirituality for over three decades. So much is he respected in the West that he earned the title of ‘Father of Yoga’ in the U.S. He was born as Mukunda Lal Ghosh into a devout family and exhibited a deep interest in spirituality from an early age. Even as a child he seemed to be more aware of the spiritual self than was considered ordinary. His interest in yoga and spirituality were inherent as both his parents were disciples of the renowned master, Lahiri Mahasaya. As a young man, he desperately sought out many saints and sages in his quest to find a guru who would guide him in his spiritual path; his quest ended when he met the guru Swami Yukteswar Giri. A few years after entering the Monastic Swami Order, he went to America where he founded the Self-Realization Fellowship (SRF) to disseminate his teachings on India’s ancient spiritual practices like yoga. He spent the rest of his life teaching in America interrupted only by a brief trip to India during which he established Yogoda Satsanga Society of India. Rabindranath Ta...
DID WE MISS SOMEONE?
CLICK HERE AND TELL US
WE'LL MAKE SURE
THEY'RE HERE A.S.A.P
Quick Facts

Indian Celebrities
Philosophers
Indian Men
University Of Calcutta
Male Philosophers
Childhood & Early Life
He was born as Mukunda Lal Ghosh into a well-to-do and devout family in Gorakhpur, India. Both his parents were disciples of the renowned master, Lahiri Mahasaya who had foretold that Mukunda would grow up to be a very famous yogi.
He was very spiritually inclined from childhood. He was greatly aware of the spiritual realm and sought out many sages and saints in the hope of finding a guru to guide him in his spiritual endeavors.
In 1910, at the age of 17, he met Swami Yukteswar Giri. He became his disciple and spent many years under his strict and loving discipline.
He passed his intermediate Examination in Arts from the Scottish Church College, Calcutta, in 1915. He graduated with the equivalent of a B.A. degree from the Serampore College. He also spent time at Yukteswar's ashram in Serampore. 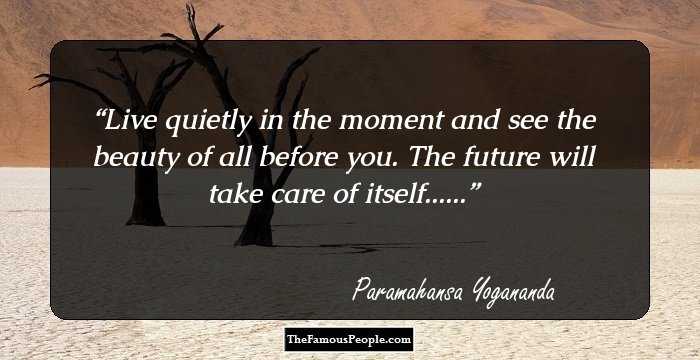 Quotes: You, Future, Will
Continue Reading Below
Later Life
He took formal vows into the monastic Swami Order in 1915 and became Swami Yogananda Giri. A couple of years later, in 1917 he founded a school for boys in West Bengal that had a combined curriculum of modern education and yoga training. This school would later become Yogoda Satsanga Society of India.
He went to the U.S. in 1920 as India’s delegate to an International Congress of Religious Liberals, which was convened in Boston. He founded the Self-Realization Fellowship (SRF) the very same year to disseminate to the world his teachings on India’s ancient practices.
He spent several years lecturing and teaching on the East coast before embarking on a cross-continental speaking tour (1924-35). His lectures attracted a number of celebrities including Amelita Galli-Curci, Vladimir Rosing and Clara Clemens.
He taught his serious students the technique of Kriya Yoga which formed the foundation of his teachings. The Kriya Yoga had been passed down through Yogananda’s own guru lineage.
He spent a major portion of his life in America—becoming the first Hindu teacher of yoga to do so.
He went on a two-month trip to Mexico in 1929 where he was warmly welcomed by the president of Mexico, Dr. Emilio Portes Gil who became his lifelong devotee and follower of his teachings.
He visited India in 1935 to meet Yukteswar and to help in establishing his Yogoda Satsanga work. During this visit he also met Mahatma Gandhi, the saint Anandamoyi Ma, and the famous physicist C. V. Raman. He was given the monastic title ‘Paramahansa’ by Yukteswar.
His life story, ‘Autobiography of a Yogi’ was published in 1946. He described his quest for spiritual enlightenment and his meetings with several notable spiritual figures like Mahatma Gandhi, Rabindranath Tagore, Jagadish Chandra Bose and C.V. Raman in the book.
He continued lecturing and writing books after his return to America. He spent his later years primarily in seclusion with only a close circle of disciples around him. 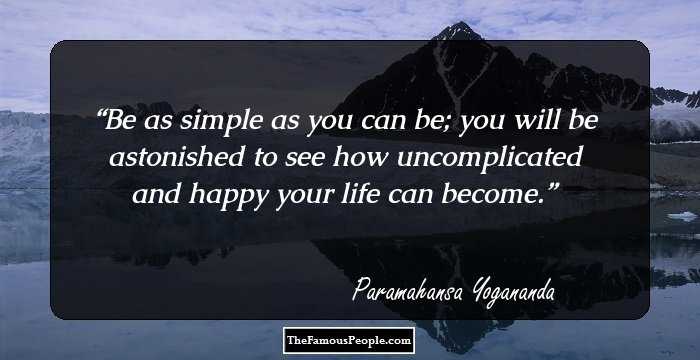 Quotes: You, Life, Will
Major Works
His book ‘Autobiography of a Yogi’ is considered one of the "100 Most Important Spiritual Books of the 20th Century". The book is credited to have changed the lives of millions and has sold over four million copies. It has also been translated into 34 languages.
He founded the spiritual organization, Self-Realization Fellowship (SRF) which was incorporated as a non-profit religious organization. The organization disseminates Yogananda’s teachings, aims and ideals all over the world through his writings and instructions of Kriya Yoga science.
Personal life & Legacy
A few days before his death, he had a premonition that he was going to leave the world. He attained mahasamadhi on March 7, 1952. The cause of his death was officially stated as heart failure.
Till date his teachings are disseminated by the Yogoda Satsanga Society of India (YSS) not just in India but also in other countries of the world. 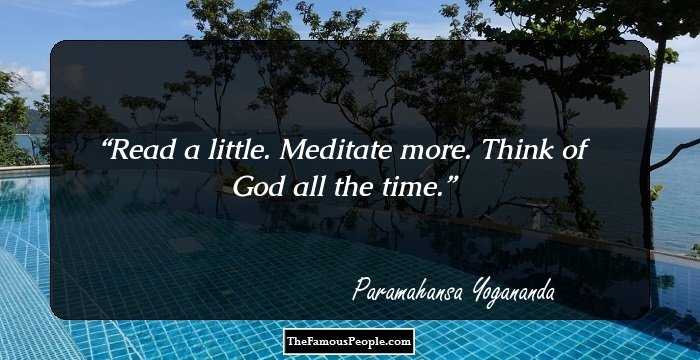 Quotes By Paramahansa Yogananda | Quote Of The Day | Top 100 Quotes

See the events in life of Paramahansa Yogananda in Chronological Order