Chanakya was a philosopher, economist, and statesman who wrote the Indian political treatise, the ‘Arthashastra’ (Economics). In this seminal work he had compiled almost every aspect of what had been written in India up to that time regarding property, economics, or material success. He is considered a pioneer in the fields of political science and economics in India due to the significant contributions he made to the development of these fields. Chanakya, also identified as Kauṭilya or Vishnu Gupta, was a powerful statesman in the court of the first Mauryan emperor Chandragupta and played a pivotal role in the establishment of the Maurya empire. Born into a Brahmin family, Chanakya was educated at Takshashila, an ancient centre of learning located in north-western ancient India. He was a highly learned person with in-depth knowledge in varied subjects like economics, politics, war strategies, medicine, and astrology. Beginning his career as a teacher, he went on to become a trusted ally of Emperor Chandragupta. Acting as the emperor’s counselor and adviser, he was instrumental in helping Chandragupta overthrow the powerful Nanda dynasty at Pataliputra, in the Magadha region and helped Chandragupta consolidate his powers. Chanakya also served as the adviser to Chandragupta’s son Bindusara. Ahmed Raza Khan...
DID WE MISS SOMEONE?
CLICK HERE AND TELL US
WE'LL MAKE SURE
THEY'RE HERE A.S.A.P
Quick Facts

Indian People
Philosophers
Indian Men
Childhood & Early Life
Chanakya was born in a Brahmin family in 350 BC. The details regarding the place of his birth are unclear. According to the Jain writer Hemachandra, Chanakya was born in the Chanaka village of the Golla region, to Chanin and his wife Chaneshvari while other sources claim that his father’s name was Chanak.
He was educated at Takshashila, an ancient centre of learning located in north-western ancient India (present-day Pakistan). He grew up to be a well-read young man, with knowledge in a variety of subjects including economics, political science, war strategies, medicine and astrology.
It is also believed that he was familiar with elements of Greek and Persian learning. He was fully knowledgeable concerning the Vedas literature too. After completing his education he became a teacher (acharya) of political science and economics at Takshashila. 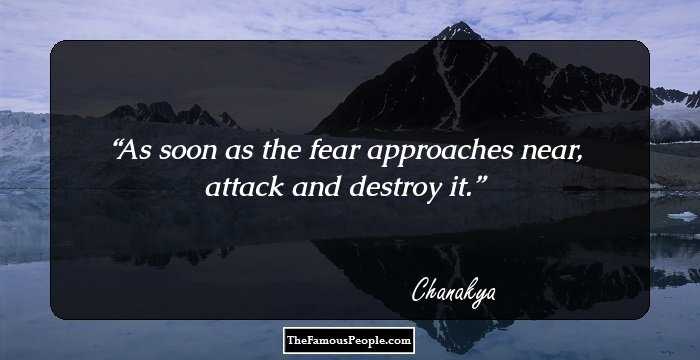 Quotes: Fear
Continue Reading Below
Later Years
Chanakya was introduced to the king Dhana Nanda who was the ruler of the Nanda dynasty. He was a powerful king though despised by his subjects because of his wickedness. The king insulted Chanakya, and the embittered Chanakya swore to destroy the Nanda kingdom.
The determined Chanakya started searching for a worthy successor to bring about the downfall of the Nanda king and met the young Chandragupta Maurya. The two men then formed alliances with some other powerful rulers to help them in their quest.
Chanakya was a highly intelligent and shrewd man. He cunningly devised some manipulative war strategies and eventually succeeded in bringing about the downfall of the Nanda dynasty at Pataliputra, in the Magadha region. Following the defeat of the last Nanda king, he established a new empire with Chandragupta Maurya as the emperor and continued serving him as his trusted political adviser.
With Chanakya as his guide, Chandragupta proceeded to defeat the generals of Alexander the Great located in Gandhara, present day Afghanistan. Intelligent and ruthless, Chanakya played a pivotal role in helping Chandragupta turn the Mauryan Empire into one of the most powerful empires of that time. The initial territory controlled by Chandragupta that extended all across Northern India from the Indus River in the west to the Bay of Bengal in the East was further expanded as the Mauryan Empire gained control of the Punjab.
A learned person knowledgeable in a wide range of topics, Chanakya wrote the treatise ‘Arthashastra’ which explores economic policy, military strategy, issues of social welfare, and other important subjects. The work was compiled as a medium of advising the king on how to manage the kingdom at times of war, famine, and epidemics.
According to a popular legend mentioned in Jain texts, Chanakya used to mix small doses of poison in the food eaten by the emperor Chandragupta in order to build his immunity against possible poisoning attempts by the enemies. The emperor, unaware of this fact, once shared his food with his pregnant queen Durdhara who was just days away from giving birth.
The poison in the food acted quickly and the queen collapsed and died within a few minutes. In order to save the unborn child in her womb, Chanakya cut open her stomach and extracted the baby. This baby, named Bindusara, succeeded Chandragupta Maurya on growing up. Chanakya served as an advisor to Bindusara for some years. 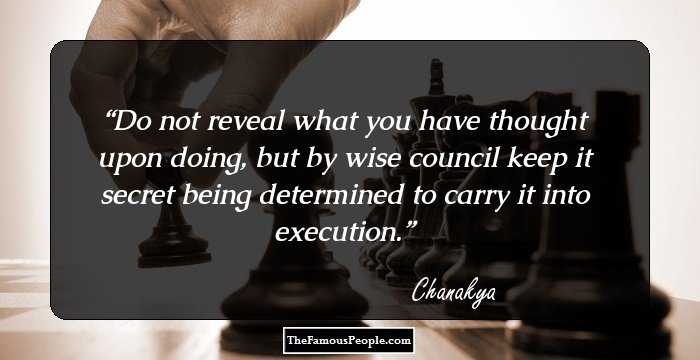 Quotes: You
Major Works
Chanakya authored the treatise ‘Arthashastra’ which discusses a variety of topics such as monetary and fiscal policies, welfare, international relations, and war strategies in detail. The text is believed to a compilation of the works of various authors by some scholars.
The ‘Arthashastra’ also explores issues related to the nature of government, law, civil and criminal court systems, ethics, economics, markets and trade, nature of peace, and the duties and obligations of a king. Topics such as agriculture, mineralogy, mining and metals, animal husbandry, medicine, forests and wildlife are also covered in the treatise.
Personal Life & Legacy
Chanakya died in 275 BC. Details regarding the death of Chanakya are shrouded in mystery. It is known that he lived a long life but it is unclear how he actually died. According to one legend, Chanakya retired to the jungle and starved himself to death. According to another legend, he died as a result of a political conspiracy during the reign of Bindusara.
The diplomatic enclave in New Delhi is named Chanakyapuri in honor of Chanakya. Several other places and institutes are also named after him. He is also the subject of several television series and books. 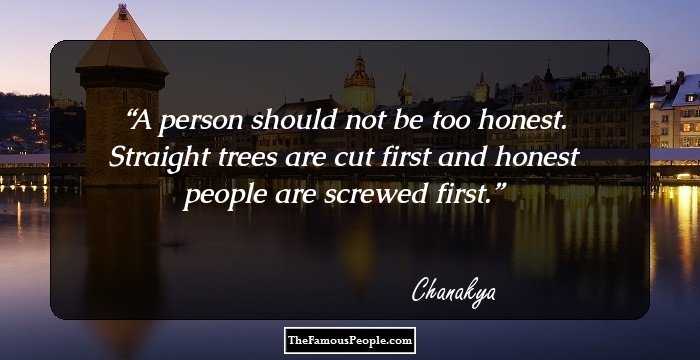 Quotes By Chanakya | Quote Of The Day | Top 100 Quotes