Imam Ahmed Raza Khan, also known as Ahmed Rida Khan and "Ala-Hazrat," was an Islamic scholar, theologian, ascetic, and jurist. He was also a renowned Sufi, an Urdu poet, and a social reformer in British India. He founded the Barelvi movement, which focused on complete devotion to the Prophet Muhammad. The movement also laid stress on the fusion of the Shari'ah with Sufi practices. Ahmed also wrote on diverse topics, such as law, philosophy, religion, and the sciences. In his lifetime, he wrote countless “fatwas” (religious rulings). He was against the Deobandi, the Wahabi, and the Ahmadiyya movements and considered their founders non-believers. Among his most notable works are the ‘Fatawa Razaviyya’ and the ‘Kanzul Iman.’ He considered himself a Sunni Muslim and was against the independence movement in India during the British rule. He is still remembered by people from India, Pakistan, and many other South Asian countries, where his followers continue to exist to this day.
Continue Reading Below Indian Celebrities
Social Reformers
Indian Men
Male Poets
Gemini Poets
Childhood & Early Years
Imam Ahmed Raza Khan was born on June 14, 1856 (10th of Shawaal, 1272 A.H.), in Jasoli, Bareilly, British India. He belonged to the Barech tribe of the Pushtuns.
Legend has it that his father, Naqi Ali Khan, had had a dream just a few days before Ahmed’s birthday, which signified his birth.
He was initially named "Mohammed," and because of the year of his birth, he was also named "Al Mukhtaar." His grandfather, scholar Raza Ali Khan, named him "Ahmed Raza," which was the name he used later.
"Abdul Mustafa,” was added to his name later, and showed his love and respect for Sayyiduna Rasulullah.
His father, Naqi Ali Khan, was taught by Ahmed’s grandfather, Raza Ali Khan. Naqi Ali wrote over 50 books, which are integral to Islamic literature.
Ahmed’s grandfather was a great Sufi of his time, who had also fought alongside General Bakht Khan, against the English, in 1834.
Once, during Ramadan, Ahmed’s father took him into a room full of sweets. He closed the door and asked Ahmed to eat the sweets, to which Ahmed replied that he had been fasting. It is a known fact that very young children are not required to fast during Ramadan. His father thus insisted that he eat and said that nobody was watching him, to which Ahmed replied that God was watching him.
He was 4 when he completed reading the ‘Quran.’ He delivered his first lecture at the age of 6, speaking on the birth of Sayyiduna Rasulullah. At 13, he completed his Islamic education and began issuing “fatwas,” or religious rulings.
Khan believed Muslims in British India were deteriorating in morality and intellect. He began a mass movement, defending Sufism, which grew in response to the Deobandi movement and the Wahabi movement.
His influence can be felt even in modern-day India, Pakistan, Sri Lanka, South Africa, Turkey, Afghanistan, Bangladesh, Iraq, the United States, and the UK.
Continue Reading Below
You May Like

Who Is The Most Popular BTS Member?
Works & Teachings
Ahmed, also known as Ahmed Rida Khan (in Arabic), or "Ala-Hazrat,” was taught by many scholars, including Shah AI-i-Rasul, Shaykh Ahmad Bin Zain Dehlan Makki, Mirza Ghulam Qadir Baig, and 'Abd al-Ali Rampuri.
He wrote books in Persian, Arabic, and Urdu. His books have been translated into various South Asian and European languages. Muhammad Abdul Aleem Siddiqi was one of his well-known disciples.
He wrote a 30-volume “fatwa” compilation named ‘Fatawa Razaviyya.’ It is considered the primary “fatwa” of his movement. It contains solutions to various issues, such as religion, business, and marriage.
He also wrote the ‘Kanzul Iman,’ an explanation of the ‘Qur'an,’ which has been translated into languages such as English, Bengali, Hindi, Sindhi, Gujarati, Dutch, Pashto, and Turkish.
His 1906 treatise ‘Husamul Haramain,’ declared the founders of the Deobandi, Ahle Hadith, and Ahmadiyya movements infidels, saying that they did not have proper veneration of the Prophet Muhammad. He received support from 268 Sunni scholars of South Asia and of a few from Mecca and Medina.
His ‘Hadaikh-e-Bakhshish’ contained spiritual poetry that praised the Prophet Muhammad. His Urdu couplets, “Mustafa jaane rahmat pe lakhon salaam,” are recited in various mosques.
Some of his other works are ‘Al Fuyoozul Makkiyah,’ ‘Subhaanus Subooh,’ ‘Tamheed-e-Imaan,’ ‘Abna ul Mustafa,’ and ‘Al Meeladun Nabawiyyah.’
Beliefs
He believed that Muhammad was “insan-e-kamil” (“the perfect human”) and exuded a “nūr” (“light”) that announced creation. This belief was different from the Deobandi view that Muhammad, although a perfect human, was physically like any other human being.
He also believed that Muhammad was “haazir naazir” (“can be seen in many places at the same time”). He believed that the Islamic Shari'ah law was the ultimate law and all Muslims were bound to follow it.
Continue Reading Below
He also believed that a true Muslim should not imitate the “kuffar,” or “kafir” (non-believer), mingle with them, or participate in their festivals.
In 1905, he also wrote a “fatwa” on the permissibility of using paper as currency.
He declared Mirza Ghulam Ahmad, the founder of the Ahmadiyyah movement, a “kuffar.”
While visiting the Mecca and Medina in 1905, he wrote a draft titled ‘Al Motamad Al Mustanad’ (‘The Reliable Proofs’), in which he labeled Deobandi leaders such as Ashraf Ali Thanwi, Muhammad Qasim Nanotwi, and Rashid Ahmad Gangohi “kuffar.” He also declared the rituals of Shia Muslims and the Wahabis “kuffar.”
Political Views
His movement was against the Indian independence movement, and he was specifically against its leader Mahatma Gandhi, who was not a Muslim.
He believed Muslims had religious freedom in British India. He did not wish to label British India as “Dar al-Harb” ("land of war”). Many of his followers played major roles in the Pakistan Movement.
In 1877, Ahmed became the “murīd” of Imam-ul-Asfiya, Shah Aale Rasool Marehrawi. His “murshid” awarded him with “khilafat” in various “silsilas.”
Personal Life, Family, & Death
He had two sons and five daughters. His sons, Hamid Raza Khan and Mustafa Raza Khan Qadri, were both scholars of Islam. He later appointed Hamid Raza Khan as his successor.
Mustafa Raza Khan succeeded Hamid. His descendant Mufti Asjad Raza Khan is currently the spiritual leader of their religious sect.
Ahmed breathed his last on October 28, 1921 C.E., at his home in Bareilly, British India. He was 65 years old at the time of his death. He was buried in the ‘Dargah-e-Ala Hazrat,’ where the annual Urs-e-Razavi is celebrated.
Legacy
Famous poet Muhammad Iqbal praised Ahmed and his consistency of opinions. However, Iqbal also criticized Ahmed, saying that had he not been hot-tempered, he could have been the Imam Abu Hanifa of his era.
An ‘Indian Railways’ express train named the ‘Ala Hazrat Express’ runs between Bhuj and Bareilly in India. On December 31, 1995, a postal stamp was issued by the Indian government, in honor of Ahmad.
The ‘Aala Hazrat Haj House’ and the ‘Aala Hazrat Hospital,’ both in Ghaziabad, Uttar Pradesh, India, were named after him. The ‘Ala Hazrat Terminal,’ at the ‘Bareilly Airport,’ in Bareilly, Uttar Pradesh, India, has also been named after him.
The ‘Raza Academy’ in Mumbai, Maharashtra, India, is an organization of Indian Sufi Muslims and promotes Islamic thoughts and beliefs through research and writings. It publishes Sunni literature aligned with the school of Ahmed.
Recommended Lists:
Writers #2124
Miscellaneous #2485
Intellectuals & Academics #936
You May Like 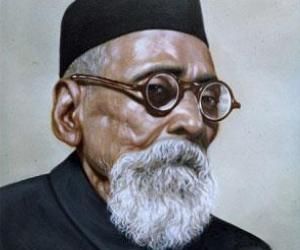