Advanced Search
Konrad Adenauer was the first Chancellor of Germany after the World War II and in this position he played a major role in rebuilding the nation from the ruins of the war. Often referred to as the "Der Alte" ("the old man"), he was in his seventies when he wast elected as the chancellor. But he never let his age become a hurdle when it came to serving his beloved nation which he helped rebuild from a war-ravaged region to an industrialized and prosperous country. Under his leadership and guidance, Germany became a democracy and achieved stability and economic prosperity. He also became famous for forging close relations with erstwhile enemy nations and for re-establishing the position of Germany on the international scenario. A qualified lawyer, he was interested in politics from a young age and was active in the Cologne city council, soon becoming the Mayor for Cologne. An outspoken and bold personality, he opposed Hitler and the Nazi Party and was forced to keep a low profile for years in fear of persecution. Still he was arrested and sent to a concentration camp but miraculously survived the war. After the war he was elected as the first Chancellor of Germany and in this position he played a pivotal role in the country’s reconstruction. Ursula von der ...
DID WE MISS SOMEONE?
CLICK HERE AND TELL US
WE'LL MAKE SURE
THEY'RE HERE A.S.A.P
Quick Facts

German Celebrities
German Men
Male Leaders
German Leaders
Capricorn Leaders
Childhood & Early Life
Konrad Adenauer was born on 5 January 1876 to Johann Konrad Adenauer, a lawyer and a Cologne civil servant, and his wife Helene, in Cologne, Rhenish Prussia. He had four siblings.
He was of frail health as a youngster and was rejected for military service at the age of 20.
He studied law and politics at the universities of Freiburg, Munich and Bonn and graduated in 1900. 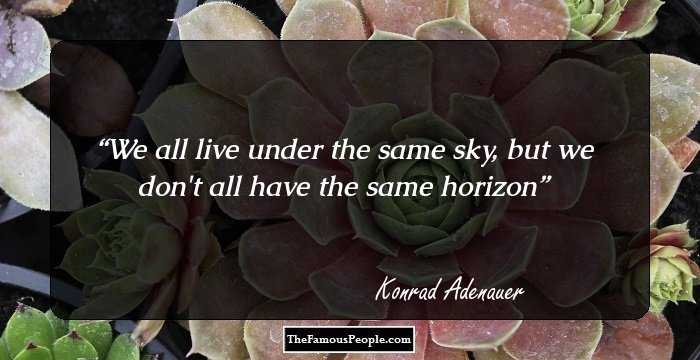 Continue Reading Below
Career
Konrad Adenauer started working as a lawyer at the court in Cologne following his graduation. A devout Christian, he joined the German Centre Party, a Catholic political party, in 1906.
He became Vice-Mayor of Cologne in 1909 and the Mayor in 1917. He served as the Mayor till 1933 and also became President of the Prussian state Council. As the mayor he built new port facilities, a green belt, sports grounds and exhibition sites.
The Nazi Party of Adolf Hitler came to power in 1933 and Cologne's city council and the Prussian parliament was dissolved. Adenauer lost his position as the mayor and his bank accounts were frozen.
Life in Nazi Germany was hell for him and he struggled to survive initially. During the 1930s and 1940s he tried to maintain a low profile in order to escape persecution at the hands of the Nazis. In 1944 there was a failed assassination attempt on Hitler following which Adenauer was arrested and sent to a concentration camp.
Eventually he was released from prison in late 1944. After the war ended, he was reinstated in his former position as the mayor of Cologne. However, he was dismissed from this position in 1945.
Following his dismissal as the mayor he became active in building a new political party, the Christian Democratic Union (CDU). By bringing together Roman Catholics and Protestants, he aimed to bury the differences between the two denominations of Christianity and present a common front against Nazism. In 1946, he became the party’s chairman.
In 1949, the Federal Republic of Germany (FRG, “die Bundesrepublik Deutschland”), comprising three western Allied occupation zones was formed. Konrad Adenauer, already 73 years of age, was elected as the first Chancellor of the FRG.
Upon becoming Chancellor he set about rebuilding Germany from the ruins it laid in following the devastation of the World War II. He focused his efforts on making Germany a sovereign democratic state.
He was very particular about developing foreign relations with other countries and by 1955 Germany had joined NATO and by 1957, the European Economic Community. He also initiated diplomatic relations with the USSR and eastern European communist nations.
Continue Reading Below
He proved to be very popular as the Chancellor and was easily re-elected to the post thrice (1953, 1957, and 1961). He resigned from his position in 1963, following the so-called “Spiegel affair” scandal and was succeeded by Ludwig Erhard. Adenauer was 87 years old at the time of his retirement. 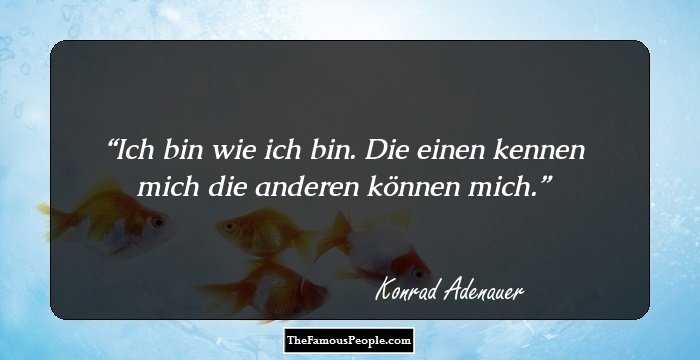 Major Works
Konrad Adenauer is best remembered for his role in the reconstruction of war-ravaged Germany into a politically stable and economically prosperous nation. He was much respected for his unwavering commitment to democracy and the part he played in forging close relationships with other European nations.
Awards & Achievements
Adenauer was named as Man of the Year in 1953 by the ‘Time’ magazine. The same year, he was also awarded the Grand Cross of the Order of Merit of the Italian Republic, Order of the Southern Cross (Brazil) and Order of the Sun (Peru).
The Charlemagne Prize was bestowed upon him in 1954 in recognition of his being a "powerful promoter of a united Europe".
In 1956, he was honored with the Grand Decoration of Honour in Gold with Sash for Services to the Republic of Austria.
Personal Life & Legacy
He married Emma Weyer in 1904. This marriage produced three children and ended with Emma’s unfortunate death in 1916.
He married Auguste Zinsser in 1919. His second marriage lasted almost three decades and produced five more children. Death of Auguste in 1948 left him a widower once again.
Konrad Adenauer died on 19 April 1967. He was honored with a state funeral at Cologne Cathedral, which was attended by many German and foreign dignitaries including the then United States President Lyndon B. Johnson.

See the events in life of Konrad Adenauer in Chronological Order