Widely regarded as ‘The Father of Science Fiction’, Jules Verne is the second most translated author in the world. This legendary, 19th century science fiction and adventure novelist is said to have laid the foundation for modern day science fiction. One of the most celebrated literary figures, Verne was a visionary, whose writings were full of futuristic inventions. Many years before the invention of Electric Submarines, Newscasts, Solar Sails, Lunar Modules, Skywriting, Videoconferencing, Taser and Splashdown Spaceships, he mentioned all of these in his novels. Some of his most much-admired novels include ‘Journey to the Center of the Earth’, ‘Twenty Thousand Leagues Under the Sea’, and ‘Around the World in Eighty Days’. All through his writing career, he wrote 65 novels, 30 plays and many short stories, essays and opera librettos. One of the greatest and most imaginative wordsmiths, Verne has been the inspiration of several scientists including submarine designer Simon Lake, aviation pioneer, Alberto Santos-Dumont, rocketry innovators, Konstantin Tsiolkovsky, Robert Goddard and Hermann Oberth. The extraordinary sci-fi voyages of Jules Verne continue to inspire art, culture, and technology. Marjane Satrapi
DID WE MISS SOMEONE?
CLICK HERE AND TELL US
WE'LL MAKE SURE
THEY'RE HERE A.S.A.P
Quick Facts

French Celebrities
Novelists
Playwrights
French Men
Male Poets
Childhood & Early Life
Jules Verne was born in Île Feydeau, an island town located in Nantes, Western France, to Pierre Verne, an attorney and Sophie Allote.
In 1834, he was enrolled at a boarding school at 5 Place du Bouffay after which he attended the École Saint‑Stanislas, a Catholic school.
In 1842, he attended the Petit Séminaire de Saint-Donatien, a religious school and later received a ‘baccalauréat’ in rhetoric and philosophy from the Lycée Royal.
In 1847, his father sent him to Paris to attend law school, during that time he also indulged in his passion for writing by authoring scripts for plays.
On June 12, 1850, his stage comedy ‘Les Paillesrompues’ was opened by the Opéra-National at the Théâtre Historique in Paris.
In 1851, he met up with Pierre-Michel-François Chevalier, the editor-in-chief of the magazine ‘Musée des familles’ and the same year he authored a short adventure story for the magazine titled ‘The First Ships of the Mexican Navy’.
In January 1851, he successfully graduated from law school with a ‘licence en droit’ in spite of spending a lot of his time writing numerous scripts for various plays, dramas and operettas.
In August 1851, his adventure short story ‘Un dramedans les airs’ was published in the magazine ‘Musée des familles’. 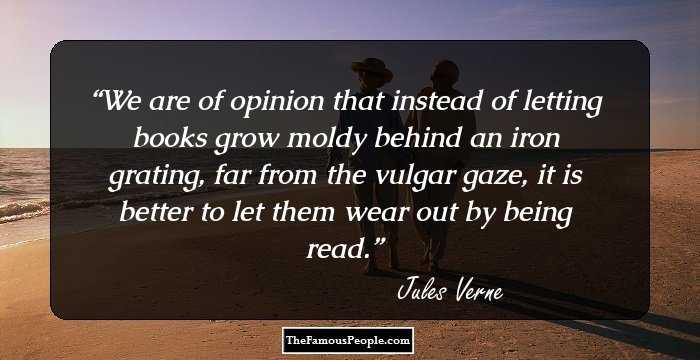 Quotes: Books
Continue Reading Below
Career
In 1863, his adventure novel ‘Voyage en Balloon’ was published. The book was an immediate bestseller and also got him a contract with a publishing house, launching his career as a writer.
In 1864, his second novel ‘The Adventures of Captain Hatteras’ was published. The same year his other novel ‘Journey to the Center of the Earth’ was published.
‘From the Earth to the Moon’ was published in 1865. In this novel he described ‘projectiles’ that could be used to carry passengers to the Moon, something similar to what we call lunar modules today.
In 1867, his novel ‘Geography of France and Her Colonies’ was published by Pierre-Jules Hetzel, after which he travelled to America.
In 1870, his classic science fiction novel titled ‘Twenty Thousand Leagues Under the Sea’ was published by Pierre-Jules Hetzel. The novel introduced a giant electric submarine, not different from the modern day one.
In 1873, one of his most acclaimed works ‘Around the World in 80 Days’, was published. This was one of his bestselling novels and has been translated in many languages.
He continued to write all through the late 1870s. Some of his works from this period were ‘The Adventures of a Special Correspondent’, ‘The Survivors of the Chancellor’, ‘Michael Strogoff’ and ‘Dick Sand: A Captain at Fifteen’.
In the 1880s, he wrote ‘Eight Hundred Leagues on the Amazon’ and ‘Robur the Conqueror’ and just a year before his death his novel ‘Master of the World’ was published. 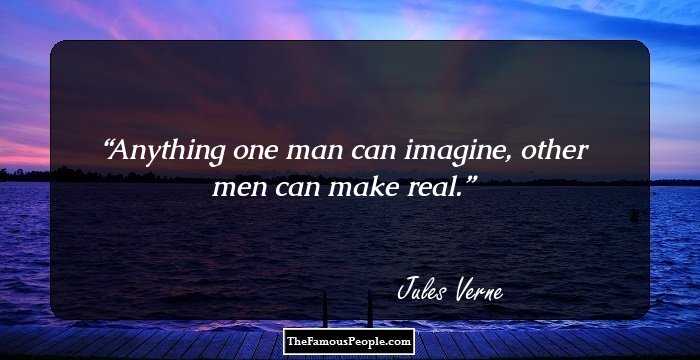 Continue Reading Below
Major Works
His classic novel ‘Around The World in 80 Days’ is one of his most popular works. The novel has been adapted into several films, including the 2004 film of the same title starring Jackie Chan and Steve Coogan.
His seminal novel ‘Twenty Thousand Leagues Under the Sea’, was made into many movies including the Walt Disney film production ‘20,000 Leagues Under the Sea’. The novel was also an inspiration to submarine designer Simon Lake.
His novel ‘Journey to the Center of the Earth’ was one of top bestselling novels that was made into numerous television series, theatre productions and in 2008 it was made into 3-D science fantasy film of the same name.
Personal Life & Legacy
In 1851, he suffered from facial paralysis that was caused by the inflammation of the right ear.
On January 10, 1857, he married Honorine de Viane Morel, who was at that time a widow of twenty-six with two young children.
In 1886, his nephew shot him twice with a pistol and the incident left him with a permanent limp.
In 1888, he entered political life and became the elected town councillor of Amiens, France.
He died on March 24, 1905 at the age of 77, at his home in Amiens, France.
After his death, his son oversaw the publication of the novels ‘Invasion of the Sea’ and ‘The Lighthouse at the End of the World’.
On 9 March 2008, the European Space Agency launched an unmanned resupply spacecraft that was named in honour of him, ‘Jules Verne ATV’.
In 1999, he was inducted into the Science Fiction and Fantasy Hall of Fame because he ‘helped shape and found modern science fiction’. 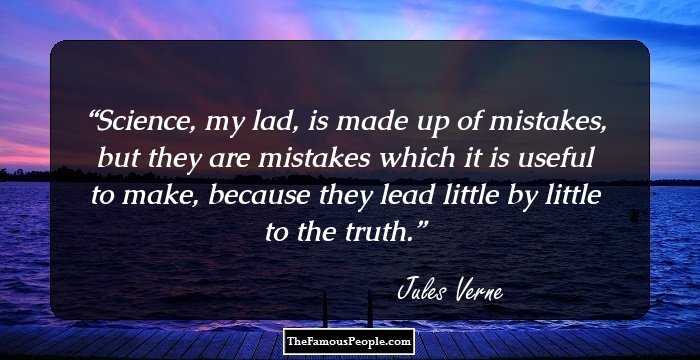 Trivia
At the age of 11, this acclaimed 19th century science fiction author, secretly acquired a spot as cabin boy on the ship ‘Coralie’, in order to travel to Indies to get a coral necklace for his cousin Caroline, who he was in love with.
Recommended Lists:
Writers #69

Quotes By Jules Verne | Quote Of The Day | Top 100 Quotes

See the events in life of Jules Verne in Chronological Order