Marjane Satrapi is an Iranian-born French woman, best known for her work as a graphic novelist. She also works as an illustrator, film director and children’s book author. Many of Satrapi’s most celebrated works are largely autobiographical graphic novels. These graphic novels have been widely credited, not solely for their storytelling, but also for the effects they have had in deepening her readers’ knowledge of recent Iranian history. Through film adaptations, her works and her account of late 20th century Iranian history have found even wider audiences, finding substantial critical and box office success worldwide. Satrapi’s works largely focus on her own life and the lives of her family members, taking place both in Iran and in Europe, where she currently lives. Satrapi also works in filmmaking, collaborating in the writing and directing of several films. Her work in film began when she collaborated on the adaptation of one of her own graphic novels into an award-winning film. Much of Satrapi’s early personal life is well-known to her readers, given the emotionally affecting and detailed first-person perspective of her best-known work, ‘Persepolis.’ In addition to details about her own coming-of-age story, Satrapi recounts major historical events from a highly personal perspective. Cyrano de Bergerac
Directors #1250
Cartoonists #39
Novelists #277
DID WE MISS SOMEONE?
CLICK HERE AND TELL US
WE'LL MAKE SURE
THEY'RE HERE A.S.A.P
Quick Facts

French People
Directors
Cartoonists
Illustrators
French Women
Childhood & Early Life
Marjane Satrapi was born on November 22, 1969, in a middle-class family, in Rascht, Iran. Her parents, Taji and Ebi Satrapi, were both politically active Iranians involved in Marxist causes and were opposed to the last Shah’s monarchy.
In 1983, when Satrapi was a teenager, her parents sent her to Vienna, Austria, to study at the Lycée Français de Vienne.
During her time in Vienna, Satrapi contracted a serious case of pneumonia. According to her autobiographical graphic novel, she was homeless during this period and nearly died from the combination of exposure and pneumonia.
Satrapi returned to her family in Tehran after recovering from her illness and studied at Tehran’s Islamic Azad University, where she majored in visual communication.
In 1991, at the age of 22, Satrapi married a student named Reza, who is also identified in her autobiographical novels as a veteran of the Iran-Iraq War. 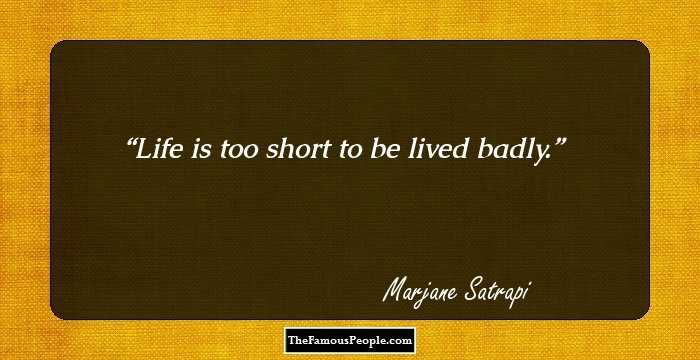 Women Writers
French Writers
Women Novelists
French Directors
Career
Satrapi devoted herself to graphic novels upon meeting her mentor, the French artist David Beauchard.
In 2000, Satrapi published the first part of the four-part autobiographical graphic novel, ‘Persepolis’, which would bring her worldwide attention.
Between 2000 and 2004, Satrapi wrote and published an additional three volumes of the ‘Persepolis’ story in French.
In 2001, Satrapi wrote several graphic novels in collaboration with other French graphic novelists. These novels include: ‘Sagesses et malices de la Perse’ and ‘Les monstres n’aiment pas la lune’.
In 2003 and 2004, the four-volume novel was re-issued in an English-language two-volume edition, bringing Satrapi to US and worldwide audiences.
In 2003, Satrapi published her graphic novel ‘Broderies’ in French; it’s a shorter novel than ‘Persepolis’, which focuses on Satrapi’s grandmother, who also appears in the ‘Persepolis’ books.
In 2004, Satrapi wrote two graphic novels: ‘Le Soupir’ and ‘Poulet aux Prunes’, the latter of which she would make into a film seven years later.
Between 2005 and 2006, Satrapi published English-language versions of ‘Les monstres n’aiment pas la lune’, ‘Broderies’ and ‘Poulet aux Prunes’ as ‘Monsters Are Afraid of the Moon’, ‘Embroideries’ and ‘Chicken with Plums’.
In 2007, Marjane Satrapi and Vincent Paronnaud directed a film version of ‘Persepolis’, with Catherine Deneuve and Chiara Mastoianni in the French version and Gena Rowlands, Sean Penn and Iggy Pop in the English-language version.
Continue Reading Below
In 2011, the English version of her French work ‘Le Soupir’ was published as ‘The Sigh’.
She has also written and directed films. These include: 'Chicken with Plums' (2011) (co-written and co-directed with Vincent Paronnaud), 'Gang of the Jotas' (film) (2012) (director) and 'The Voices' (2014) (director). 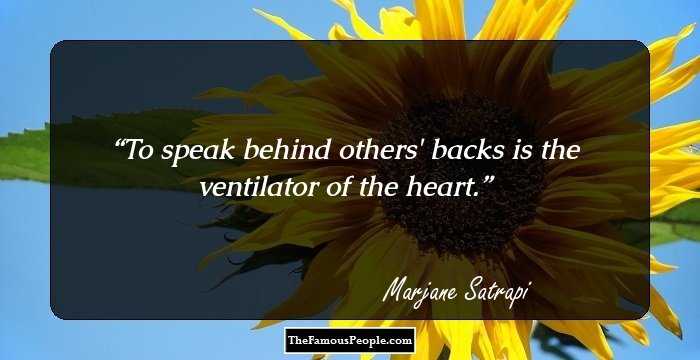 French Novelists
Women Cartoonists
French Cartoonists
Female Film Directors
Major Works
‘Persepolis’ was Satrapi’s most significant work, in terms of financial and critical success. It was published first in French and later in English, with a re-issue in 2007 as a single-volume edition. ‘Persepolis’ was also the first of Satrapi’s works to be made into a film.
‘Chicken with Plums’ or ‘Poulet aux Prunes’ is one of Satrapi’s most widely acclaimed graphic novels and the second of her graphic novel to be turned into a film.
Recommended Lists:

Sagittarius Writers
Female Illustrators
French Illustrators
Women Artists & Painters
Awards & Achievements
In 2001, Marjane Satrapi won the Angoulême Coup de Coeur Award, a major prize for comics authors, for her graphic novel ‘Persepolis’.
In 2002, ‘Persepolis: Tome 2’ won the Angoulême Prize for Scenario, another prestigious award given during the annual Angoulême Comics Festival in France.
In 2005, the Angoulême Best Comic Book Award was given to ‘Poulet aux Prunes’, Satrapi’s second work to receive recognition at Angoulême.
In 2007, the Jury Prize of the Cannes Film Festival was awarded to the film adaptation of ‘Persepolis’, which Satrapi co-directed and co-wrote.
Continue Reading Below
In 2008, the Cinema for Peace Award recognized ‘Persepolis’ as the ‘Most Valuable Movie of the Year’.
In 2009, Marjane Satrapi was awarded honorary doctorate degrees from two universities: the Katholieke Universiteit Leuven and the Université catholique de Louvain.
In 2013, Satrapi’s work was recognized in her native country, when ‘Chicken with Plums’ received the Noor Iranian Film Festival’s award for Best Animation. 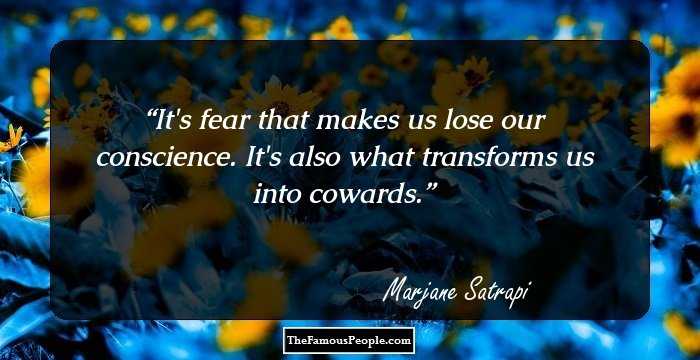 Quotes By Marjane Satrapi | Quote Of The Day | Top 100 Quotes

See the events in life of Marjane Satrapi in Chronological Order