(French Poet Known for His Works: ‘The Drunken Boat’, ‘A Season in Hell’ and ‘Illuminations’)

Jean Nicolas Arthur Rimbaud was a 19th-century French poet whose works deeply influenced the Symbolist movement and surrealism. He started writing at a very young age and was prolific for a few years before he abruptly abandoned writing. He excelled as a student in school and was a voracious reader. He hailed from a troubled household and struggled with an overbearing mother at home. Having been abandoned by his father, he had a sad and lonely childhood. As an adolescent, he sought solace in writing and began writing extensively, producing a large volume of poems. Then he stopped writing in his early 20s and began a new career as a merchant. He was a restless person who lived a libertine lifestyle. He struggled to earn money and eventually became a colonial tradesman in Africa. He wrote extensively to his family and friends during his travels; many of his letters were later collected and published. He had a passionate and tumultuous romantic relationship with fellow poet Paul Verlaine that lasted for two years. In his mid-30s, he developed what was initially believed to be arthritis. His condition was eventually diagnosed to be cancer, and he succumbed to it soon after. Paul Verlaine
DID WE MISS SOMEONE?
CLICK HERE AND TELL US
WE'LL MAKE SURE
THEY'RE HERE A.S.A.P
Quick Facts

Cause of Death: Bone Cancer

Arthur Rimbaud was born on 20 October 1854, in Charleville, France. His father, Frédéric Rimbaud, was an infantry captain of Provençal heritage. He was known to be good-tempered and easy-going. His mother, Marie Catherine Vitalie, was a farmer’s daughter. She was a devout Catholic with rigid beliefs.

Arthur was his parents’ second child. He had one elder brother and three younger siblings, of who one died as an infant.

His parents had a troubled marriage that lasted around seven years. His father was hardly ever home and didn’t attend his children’s births or baptisms. Though the couple never divorced, his father abandoned the family in 1860, leaving his estranged wife to raise the children single-handedly.

Arthur had a difficult relationship with his mother, an overbearing and authoritarian woman. She expected him to excel in studies and often abused him for trivial reasons. This kindled in the young boy a dislike for authority and formal education.

He was drawn to literature from a young age and was a voracious reader. He began composing poems as a teenager and won the first prize for a Latin poem at the Concours Académique in 1870. 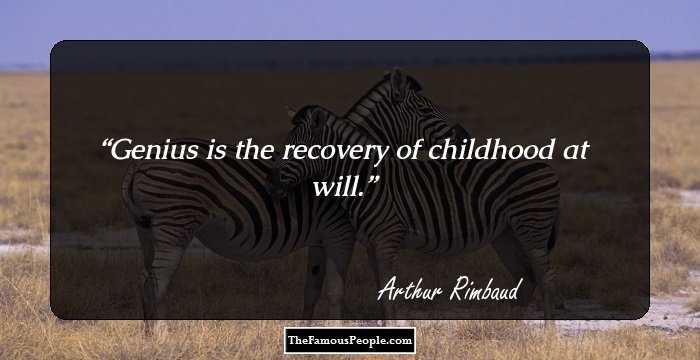 Arthur Rimbaud began writing in earnest when he was 16. Lonely and unhappy, he channeled his angst into his poems, expressing his disgust with the constraints of small-town life. He loathed religion as well and longed for a life free from the bondage of all sorts.

The Franco-Prussian War broke out in 1870. During this time, Arthur ran away to Paris, where he was arrested and locked up in Mazas Prison. He secured his release with the help of his former teacher and returned home. He ran away once again after a few days.

In the 1870s, he began leading the life of a vagabond, taking to heavy drinking and adopting a rude demeanor. He also stole things from others. Interestingly, this period also saw marked productivity in his literary career--he wrote almost all of his poetry between 1870 and 1875.

He quit writing in 1875 and began looking for other means to placate his restlessness. He studied several languages and enlisted as a soldier in the Dutch Colonial Army in 1876 to get free passage to Java in the Dutch East Indies. A few months later, he deserted the army and fled into the forest. He eventually returned to France by ship.

In late 1878, he went to Larnaca in Cyprus. There, he took up a job as a stone quarry foreman in a construction company. He fell ill after a few months and had to return to France.

He spent the ensuing months traveling from one place to another and finally settled in Aden, Yemen, in 1880. He found employment in the Bardey agency and went on to run the firm’s branch in Harar, Ethiopia.

In 1884, he quit his job to start his own business dealing in coffee and firearms among other goods. The first European to set up a business there, he found considerable success in the coffee trade. Despite being a successful merchant, he continued to be dissatisfied with life. 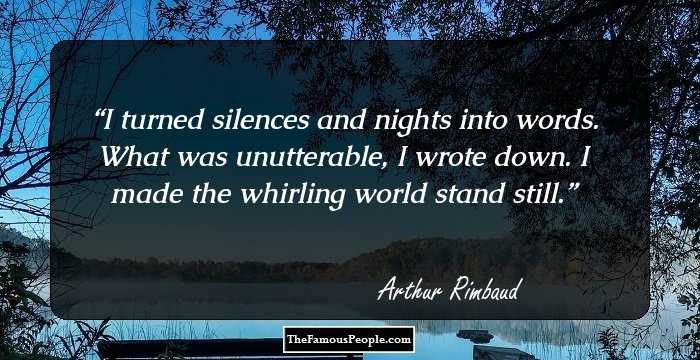 One of Arthur Rimbaud’s best-known works is Voyelles, a sonnet in alexandrines he composed even before he turned 17. In this poem, he associates the different characters of the vowels with different colors. It is one of the most studied French-language poems.

His extended poem in prose Une Saison en Enfer was written and published in 1873. Critic Bernard Mathieu describes the work as “a terribly enigmatic poem” as it can be interpreted in numerous entirely incompatible ways.

As a teenager looking to become a poet, Arthur Rimbaud wrote letters to several poets, including Paul Verlaine. Verlaine was intrigued by Rimbaud’s poems and invited him for a visit.

Rimbaud and Verlaine met for the first time in September 1871. At that time, Verlaine was married to a young woman called Mathilde, and the couple was expecting a child.

Despite being married, Verlaine became smitten with the teenage Arthur Rimbaud and began a torrid affair with him. The two started living a vagabond-like life, drinking heavily and abusing drugs. Verlaine abandoned his wife and newborn baby during this time.

The relationship between Rimbaud and Verlaine was often a violent one. The men fought frequently. Once, Verlaine took a pistol and fired two shots at Rimbaud in a fit of rage and injured the young man. Following this incident, Verlaine was arrested and sentenced to two years in prison. 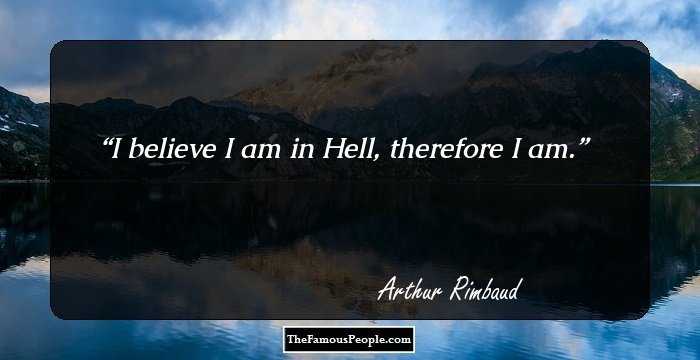 Arthur Rimbaud developed severe pain in his right knee in early 1891. He was in Aden at that time. Initially, he thought it was arthritis and sought treatment. However, the knee failed to heal, and a doctor recommended immediate amputation, suspecting it to be tubercular synovitis.

He returned to France for better treatment, and his right leg was amputated. Post-operation, he was diagnosed with bone cancer. He spent the next few months in great pain and died on 10 November 1891. He was just 37.

Quotes By Arthur Rimbaud | Quote Of The Day | Top 100 Quotes

See the events in life of Arthur Rimbaud in Chronological Order