Widely regarded as the ‘Father of Modern Short Story’ writing, Guy de Maupassant was one of the greatest French writers in the 19th century. His stories strikingly captured various aspects of day-to-day life in France during that time. Many of his stories were based on the Franco-Prussian War and the lives of innocent people who were caught in it. His writing belonged to the genre of naturalism. He has written more than 300 short stories, six novels, travel books and also a book of poetry. Some of his well-known works include, ‘Boule de Suif', 'Pierre et Jean', 'Bel Ami', ‘La Parure’ , 'Deux Amis', 'Mother Savage', and 'Mademoiselle Fifi'. Soon after graduation, Maupassant served as a volunteer in the Franco-Prussian War, after which he pursued a career as a civil servant working in the Navy Department and the Ministry of Public Instruction. He also wrote under various pen names - Guy de Valmont and Joseph Prunier. Unfortunately, in his 20s he began to suffer from syphilis, which caused him much mental agony and trouble for the rest of his living years.
Continue Reading Below French People
Short Story Writers
French Men
Leo Writers
Male Writers
Childhood & Early Life
Henri Rene Albert Guy de Maupassant was born in Tourville-sur-Arques, France. His parents Laure Le Poittevin and Gustave de Maupassant were both from affluent families.
When he was eleven years old, his mother separated from his father. He lived under the care of his mother. He was very devoted to his mother, who was a well-read woman with a passion for classical literature.
When he was thirteen, he went to learn classical studies at the Yvetot seminary for a brief period. He later attended the Institution Leroy-Petit, in Rouen, a private school.
In 1867, he began high school, during which time he became friendly with French writer, Gustave Flaubert. The following year, he went to the Lyc�e Pierre-Corneille School, where he took part in drama and became passionate about poetry.
In 1868, when he was eighteen, he saved the life of poet Algernon Charles Swinburne, rescuing the latter from drowning off the coast of Etretat. After his graduation, he became a volunteer in the Franco-Prussian War.
From 1871, he went to Paris and started working as a clerk in the Navy Department. He would spend the next ten years of his life, serving in this position.
French writer, Gustave Flaubert played a pivotal role in guiding him through his earlier days in literature and journalism. It was in the latter’s home that he met many writers, including Emile Zola and Ivan Turgenev.
In 1878, he was transferred to the Ministry of Public Instruction. He also started working as a contributory editor to the newspapers, ‘Le Figaro, Gil Blas’, ‘Le Gaulois’ and’ l'Echo de Paris’. 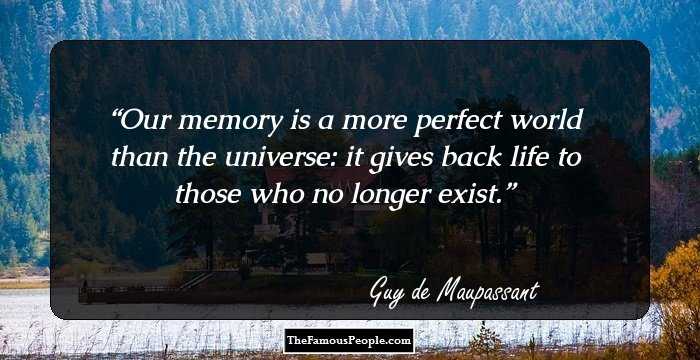 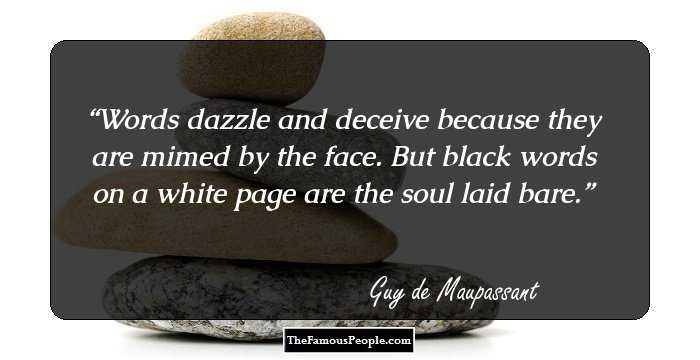 Quotes: Soul
Continue Reading Below
Major Works
His seminal work, ‘La Parure’ remains one of his most famous short stories. The story is particularly known for its surprising ending. In 2007, it was produced at the Edinburgh Festival.
His magnum opus, 'Boule de Suif' is widely revered as one of his best short stories. This short story was made into an opera named, ‘The Greater Good’ in 2006.
Personal Life & Legacy
It is widely believed that from 1880 to 1886, he was in a relationship with a woman named, Gisele Estoc.
He was also romantically involved with a woman named, Josephine Litzelmann.
He fathered three children - Honore Lucien Litzelmann, Jeanne Lucienne Litzelmann and Marthe Marguerite Litzelmann.
He suffered from Syphilis, a sexually transmitted disease that he contracted in his youth.
He suffered from mental problems and tried to commit suicide by slitting his throat in 1892. He was later admitted into a private mental institute, Esprit Blanche at Passy, in Paris.
He died at the age of 42 in Esprit Blanche at Passy, in Paris. He was laid to rest at the Cimetiere du Montparnasse, Paris.
In 1894, he became the subject of Leo Tolstoy’s book ‘The Works of Guy de Maupassant'. 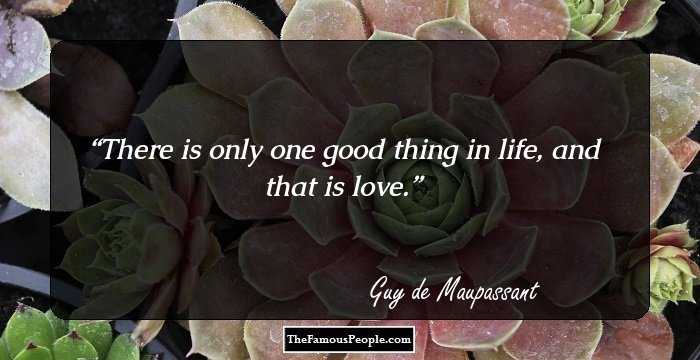 Quotes: Life, Love
Trivia
This acclaimed French short story writer and novelist was one among 46 Parisian literary and artistic people, who wrote a letter to the Minister of Public Works in Paris in protest of the construction of the Eiffel Tower.
You May Like