John Wesley, best remembered as the Father of the Methodist movement, was born in England to an Anglican clergyman and his devout wife. Educated at Christ Church, Oxford, Wesley was ordained first as a deacon and then as a priest of the Anglican Church. Later he went to the United States to become the minister of the newly formed Savannah parish; but the venture was highly unsuccessful and he returned home beaten and depressed. He began to see the light when by chance he discovered the Lutheran doctrine of salvation by faith alone. Eventually, he started the Methodist Movement, which became a huge establishment within his lifetime. Although he never severed his ties with the Church of England, Methodist Church gradually became a separate denomination. Today, there are around 80 million Methodists across the earth. The United Methodist Church, the Methodist Church of Great Britain, the African Methodist Episcopal Church and the Wesleyan Church are some of the largest bodies which follow Wesleyan theology. Apart from these, the Holiness movement and Pentecostalism also owe their origins to him. British People
Spiritual & Religious Leaders
British Men
Christ Church, Oxford
Briton Theologians
Childhood & Early Life
John Wesley was born on 28 June 1703, in Epworth, near Lincoln. His father, Samuel Wesley, was a clergyman belonging to the Church of England. His mother, Susanna Wesley (née Annesley), was a devout woman, who took care to inject moral values into her children.
The couple had nineteen children, out of which John was born fifteenth. The siblings, including the girls, were not only taught to read and write English, but were also expected to become skilled in Latin and Greek and learn major parts of the New Testament by heart.
On 9 February 1709, the roof of their home caught fire while they were all sleeping. Although his parents could evacuate his siblings, John was caught in the first floor, with no scope for escape. Ultimately, a parishioner, standing on a human-ladder, pulled him out through the window.
The memory of the fire remained with him forever. In later years, he often quoted the famous text from Bible, 'A Brand Plucked out of the Fire', to describe the incident.
In 1714, as he turned eleven, John Wesley was sent to the Charterhouse School in London. He graduated from there in 1720 and entered Christ Church, Oxford, on scholarship with classics and logic.
In 1724, he graduated from Christ Church with a Bachelor’s degree. He now decided to pursue a Master’s degree and concurrently become a fellow of the university. With such an aim, he was ordained a deacon on 25 September 1725.
In March 1726, he was elected a fellow of Lincoln College, Oxford. He now began to receive a salary. But soon the call of the ministry became too loud to ignore and so after receiving his master’ degree in August 1727, he returned home to Epworth. 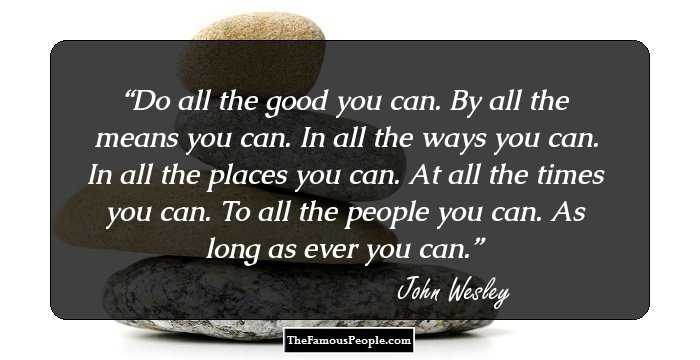 The Sexiest Men Of 2020, Ranked
Career
In 1727, Wesley started his career as a curate in his father’s parish. Although he was ordained as a priest on 22 September 1728 he continued serving as the curate till November 1729.
Thereafter, he returned to Oxford at the request of the Rector of Lincoln College and took up his position as a junior fellow. He mainly taught Greek Testament. Although he enjoyed the rich social life at Oxford he also began to delve deeper into religion.
Around this time, his younger brother, Charles Wesley, also a student at Oxford, started an association of like-minded individuals who met on regular basis to read and study scriptures and also to undergo rigorous self-examination. In addition, they took part in charity and visited the prison regularly.
Very soon, John Wesley took up the leadership of the group. In the beginning their detractors referred to them as ‘The Holy Club’. However from 1732, they began to be referred to as the Methodists because they followed a rigorous method and tried to ensure that each hour was used wisely.
This also had an adverse effect on his career. The authorities as well as the guardians began to fear that he was trying to indoctrinate the students. His father asked him to take charge of his parish; but Wesley refused the offer.
At this juncture, he was requested to take up the position of the minister of Savannah parish in the Province of Georgia in the American colonies. Accordingly, Wesley sailed for Savanna from Gravesend in Kent along with his brother Charles on 14 October 1735.
On the way, their ship was caught in a terrible storm. Although he was terribly frightened, he noticed that the German Moravians on the ship were praying calmly. On introspection, he realized that the Moravians possessed a deep-rooted faith on God, which he lacked. The incident affected him deeply.
Eventually, they reached the colony in February 1736. His main mission was to convert the native Indians there; but in actual practice, his work was limited to the European settlers of that area.
Nonetheless, the attendance at the church began to increase. Publication of ‘Collection of Psalms and Hymns’ was another of his significant achievements of this period. In fact, it was the first Anglican hymn book published in America.
Continue Reading Below
In spite of such success, Wesley had to flee the colony in December 1737 because of some legal problems arising out of a failed love affair, and returned to England broken and depressed. In England, he met Petrus Böhler, a German-English Moravian missionary and received counsel from him.
However, he was still very depressed. On 24 May 1738, he unwillingly attended a Moravian meeting in Aldersgate Street, London, where he heard a reading of Martin Luther’s preface to the Epistle to the Romans. Suddenly, Wesley began to see a new light and his heart became warm.
All these years, he had tried to fight against sin following the path set up by the church. He now began to believe that it was faith on Christ rather than good deeds, which leads to salvation.
Subsequently, he along with Charles and another gentleman founded another group, which in later years became known as the 'Fetter Lane Society'. The membership increased quickly and for convenience, they divided the members into several smaller bands.
In 1738, Wesley visited the Moravian headquarters in Herrnhut, Germany. On returning to England, he drew up rules for these bands and also published a collection of hymns for them.
He also began to preach extensively on the doctrine of salvation by faith alone, which angered the established church. Consequently, he was barred from preaching. However, he refused to bow down and in April 1739, he gave his first sermon near Bristol in the open air.
He soon found that preaching in the open was the best way to reach out to the people, who generally stayed away from the churches. So he continued his field preaching enthusiastically. This earned the displeasure as well as prosecution by the church.
Undeterred, Wesley began to expand his organization and appointed lay preachers to reach out to more people. He also began to build chapels, first at Bristol and then in other towns. Subsequently, he broke away from the Moravians and formed Methodist Society.
In 1742, he introduced the ‘class-meeting’ system so as to enforce discipline within the society. To keep out the undisciplined members, he also introduced the probationer system. Initially, he visited each unit personally at least once in three months; but soon the organization became too big for that.
Continue Reading Below
Therefore in 1743, he drew up a set of rules to be followed by all the units. Later on these rules became the basis of the Methodist Discipline. In the following year, he held the first Methodist conference.
Over the next decade, he worked tirelessly, moving across Great Britain and Ireland, preaching to thousands of people, who were otherwise excluded from the church. Moreover, he organized the movement more systematically, dividing the groups into societies, then classes, connections and circuits with a superintendent at the helm.
Unfortunately, in his struggle to establish Methodism, he neglected his own health and became inflicted with tuberculosis. On his recovery in 1751, he once more immersed himself into the work, making sure the movement he had started would continue after his death.
Slowly, the movement spread to the United States of America. Since he was still a member of the Church of England, he refrained from ordaining priests, but worked with the help of priests ordained by the Church and also the lay preachers. In 1776, with the independence of the USA, the situation became different.
In 1784, the Bishop of London refused to ordain priests for the American Methodists. Thus Wesley was forced he ordain two lay preachers and appoint Thomas Coke as superintendent before he sent them to America. With this, the Methodists slowly moved away from the Church of England and became a separate denomination. 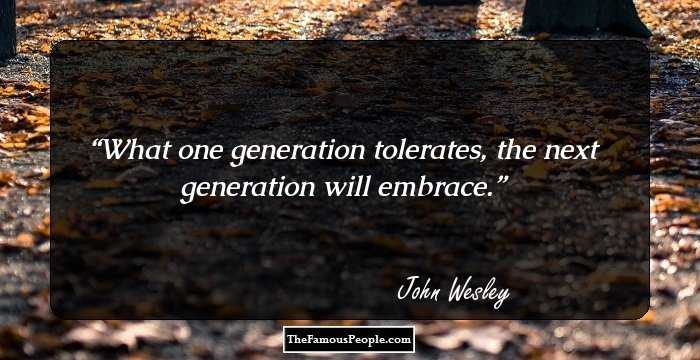 Quotes: Will
Major Works
John Wesley, along with his brother Charles and George Whitefield laid the foundation of the Methodist movement within Protestant Christianity. Vigorous missionary work ensured that the movement spread throughout the British Empire and the USA. Today there are approximately 80 million adherents worldwide.
It is said that throughout his long career, Wesley had travelled over 250,000 miles and had preached 40,000 sermons across the country, trying to reach out to the poor and downtrodden. He also kept on working on social issues such as prison reform and universal education until his death.
Personal Life & Legacy
In 1751, at the age of forty-eight, Wesley married Mary Vazeille, a well-to-do widow with four children from her previous marriage. However, Wesley was too busy with his work to pay much attention to his wife. Unable to cope, she left him for good after a few years.
Wesley died in his bed on 2 March 1791. He was then eighty-seven years old. As his friends gathered around his death bed he bid them farewell and then said "The best of all is, God is with us", repeating the words several times and then died peacefully.
Later he was entombed at Wesley's Chapel, built in City Road, London. Wesleyanism, or Wesleyan theology, which refers to the theological system, inferred from his various sermons, theological treatises, letters, journals, diaries, hymns carry forward his legacy. 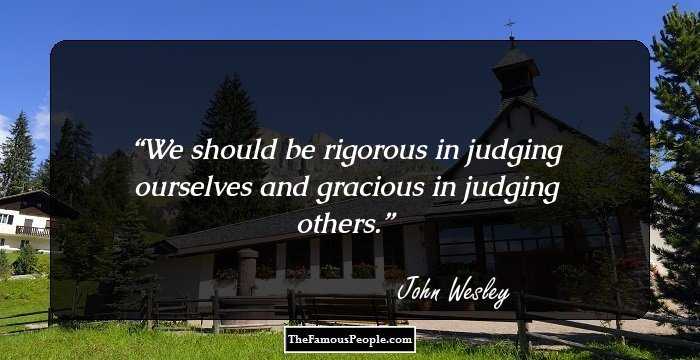 Trivia
Susanna Wesley is known as Mother of the Methodists because two of her sons, John and Charles Wesley founded the Methodist movement.
You May Like

Quotes By John Wesley | Quote Of The Day | Top 100 Quotes

See the events in life of John Wesley in Chronological Order