With more than 6500 hymns under his belt, each of which gave and still gives a soulful rendition of his beliefs and thoughts and an easy way to preach the words of Gospel, Charles Wesley was truly a messenger of God. Coming from a family wherein his father served as a rector, priesthood was natural choice for Charles to take up. However, the path wasn’t an easy one as he was left disheartened and depressed with people rejecting his belief. However, Charles soon experienced a conversion which not only changed him but made preaching a lot comfortable. He soon walked the path of George Whitefield open-air preaching method, which led to the initiation of the Methodist denomination of Christianity, of which he was one of the founding members. No sooner, Charles Wesley through his hymns informed the ignorant about the Gospel. His hymns, till date are popular sung in the Methodist circles. They are a part of the Methodist hymn book ‘Hymns and Psalms’. Many of his hymns have been translated into other languages, and form the foundation for Methodist hymnals, as the Swedish Metodist-Episkopal-Kyrkans Psalmbok printed in Stockholm in 1892. British People
Briton Theologians
British Intellectuals & Academics
Sagittarius Men
Childhood & Early Life
Charles Wesley was the youngest son and eighteenth child of the nineteen children born to Susanna and Samuel Wesley in Epworth Lincolnshire, England. Only ten of their children survived infancy.
His father was a priest in the Church of England. Young Wesley was much influenced by his mother who taught all her children the importance of self-control and discipline in life. She also imparted them the early education.
In 1716, he enrolled at the Westminster School in London. Ten years later, he gained admission at the Christ Church, where his elder brother John had been studying.
It was at Oxford that he formed a prayer group in 1727 comprising of fellow students. The group came to be known as Holy Club. His brother, John joined the group in 1729 becoming its leader and moulding it according to his own motives.
The group regularly met to carry out their social duties. Additionally, they stuck to a methodical study of Bible and living a holy disciplined life. Their systematic approach and exceptionally disciplined lifestyle led them to earn the label of ‘Methodists’ by fellow students.
It was during this that he befriended George Whitfield who joined the group. The latter played a quintessential role in launching what came to known as the Methodist movement.
In 1735, he attained a Master’s degree in classical languages and literature and emulated his father and brother by joining the Church. He undertook a journey along with his brother John for the Georgia Colony in British America.
In Savannah, he took up the post of the Secretary of Indian Affairs to the Governor, General James Oglethorpe. However, his preaching and line of thought was not taken favourably by the people who resisted his message. Dejected and despaired, he undertook a journey backwards to England in 1736. 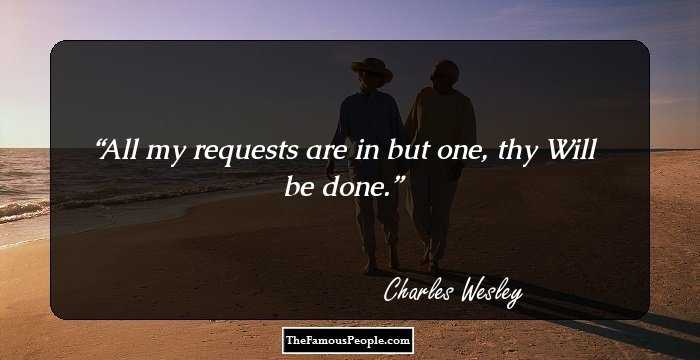 The Best Black Actresses Of All Time
Later Life
The depressive mood and melancholy living gave way to a spirited approach which was further uplifted with a renewed passion for spreading the teachings of the Gospel in a novel manner in both the brothers.
It was also around this time that he began to pen down hymns, for which he became known worldwide. He transformed his style of preaching completely. Instead of urging people to walk down to a near-by Church and get influenced by the words of Gospel, he sang poetic hymns wherever he found a group of people.
The open-air preaching, which was first initiated by George Whitfield, became hugely popular. The converts slowly magnified in numbers and were clubbed into ‘societies’ to further nurture their faith and belief.
Upon Whitefield’s departure to America, he and John were responsible for organizing the growing Methodist movement in England. The brothers took to spreading the knowledge by travelling to different parts of the country such as London, Bristol and New Castle and to parts of Scotland, Wales and Ireland as well.
It was while undertaking miles of travel that he got time for reflection and composed the many of the Methodist hymns that he sung to people to preach the Gospel. These songs are till date sung by Methodist followers.
In 1743, they travelled to Cornwall wherein they received mixed response. While some readily accepted their line of thought and belief, there were others who resisted the preaching so much so that they caused riots to expel the brothers.
Since most of the Church opposed their preaching style, it became essential for the brothers to find a single place that would serve as the base wherein ‘societies’ that they formed could visit. With financial assistance from friends, they set up the Foundery in 1739, as a base for their work. Another one shortly followed at Bristol.
Friction occurred between the two brothers later on as he resisted John’s line of actions which separated the Methodist from the Church of England, rather than it being a revival part of it. The difference swelled up further when John persisted on travelling and preaching whereas Charles objected it due to his frail health.
He gave up travelling in 1756 and dedicated much of his time to hymn writing. He even took up a place in the preaching and pastoral ministry, first in Bristol and later in London.
Continue Reading Below 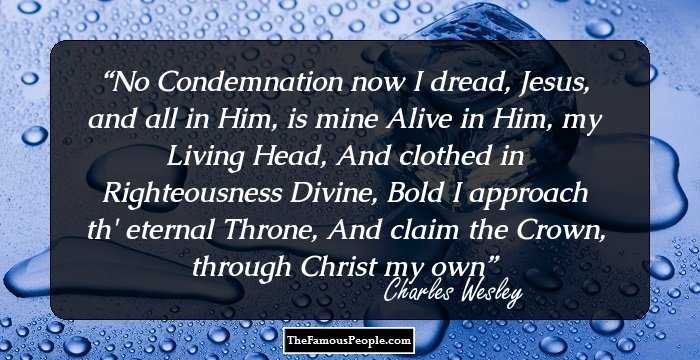 Quotes: Living, I
Personal Life & Legacy
In 1749, he tied the knot with Sarah Gwynne, daughter of a wealthy Welsh magistrate Marmaduke Gwynne. Fondly known as Sally, she accompanied him and John in their evangelistic journeys until 1753.
Only three of their eight children survived past infancy. Both his sons, Charles Jr and Samuel were musically talented as their father and became most accomplished musicians in the world.
The family first stayed in Bristol and later shifted to London in 1778, where they remained up until 19th century. The house in Bristol still stands as of now.
The highly taxing journeys and strenuous life led him to suffer from nervous exhaustion and severe depression during the later days of his life. He breathed his last on March 29, 1788 and is interred in the churchyard of Marylebone Parish Church, as per his wish.
His legacy continues to thrive as he is commemorated in the Calendar of Saints of the Evangelical Lutheran Church in America every year on March 2. Furthermore, he is commemorated on March 3rd in the Calendar of Saints of the Episcopal Church, on March 24th in the Anglican calendar and on March 29th in the Calendar of Commemorations by The Order of Saint Luke.
In 1995, given his long list of enticing and enduring hymnody, he was inducted in the Gospel Music Hall of Fame by the Gospel Music Association, as a means to recognize his musical contributions.
His hymns have been a regular feature on the television and have been played in varied shows such as ‘South Park’ and ‘The Simpsons’. Additionally, they have been recorded by artists as diverse as Johnny Cash, Dolly Parton and Mariah Carey.
Till date, people who wish to train themselves as Methodist preachers need to be well conversant with his hymns.
His most famous hymn, ‘Hark the Herald Angels Sing’ is played everywhere from cathedrals to supermarkets.
In 2007, the Irish postal service honoured him on his 300th anniversary by issuing a 78c stamp in memory of him.
Trivia
He was one of the founding fathers of the Methodist denomination of Christianity, who gained fame for writing hymns, some of which are featured in the Methodist hymn book ‘Hymns and Psalms’. His hymn, ‘Hark the Herald Angels Sing’ is played everywhere from cathedrals to supermarkets
You May Like

See the events in life of Charles Wesley in Chronological Order