Advanced Search
Prince Shah Karim Al Hussaini Aga Khan (IV) is a Swiss-born British business tycoon, as well as the 49th and current Imam of ‘Nizari Ismailism’. Educated in Switzerland and at Harvard University, he was chosen as the successor to the imamate of the Nizārī Ismāʿīlī sect by his grandfather, the Aga Khan III, whom he succeeded in 1957. During the early years of his reign, he initiated visits to gain the trust of people of the community and emerged as a strong leader, ordering his followers to become citizens of the countries in which they resided, and to leave countries where they faced trouble and persecution. He is also known for his business acumen, and his extensive private holdings include hotels, airlines, and newspapers. Through organizations such as the ‘Aga Khan Foundation’, the imamate funded aid agencies offering educational, health, and housing services in South Asia and East Africa. He became the spiritual leader of the world’s Ismaili Muslims and currently chairs the ‘Aga Khan Development Network’. One of the world's ten richest royals, ‘His Royal Highness’ has been on the throne for more than 50 years. Among the various works he has undertaken during his reign, the prominent ongoing ones are the elimination of global poverty, the promotion and implementation of secular pluralism, the advancement of the status of women, and the honoring of Islamic art and architecture. British People
Spiritual & Religious Leaders
British Men
Harvard University
Male Leaders
Childhood & Early Life
He was born on December 13, 1936, in Geneva, Switzerland, to Prince Aly Khan, and his first wife, Princess Tajuddawlah Aly Khan, the eldest daughter of the 3rd Baron Churston. He has a brother, Prince Amyn, and two half-siblings from his parents’ other marriages.
He spent his childhood in Nairobi, Kenya, where he received his early education through private tutoring. Later, he was enrolled in the ‘Institut Le Rosey’ in Switzerland, the most expensive boarding school in Europe. Then he attended Harvard University where he switched to majoring in History after flunking an engineering course.
In 1957, when his grandfather passed away, he was thrust into the position of the Aga Khan (IV). Two years later, he graduated from Harvard with a Bachelor of Arts degree in History (with Cum Laude honors). 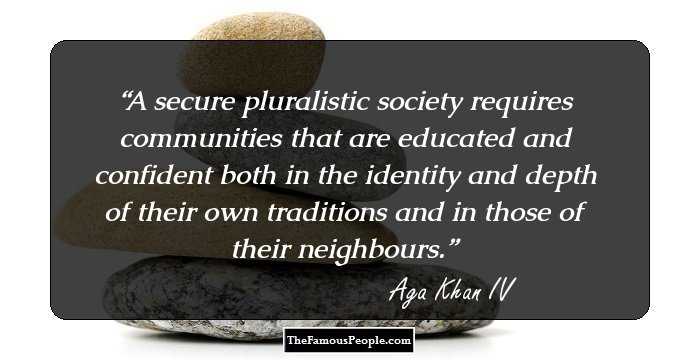 Continue Reading Below
Career
Following the death of his grandfather, the Aga Khan III, he became the 49th Imam of the Nizari Ismailis, at the age of 20. Upon taking the position, he intended to continue his grandfather’s work towards building modern institutions to improve the quality of life of the ‘Nizari Ismailis’.
He emphasized on social issues such as material development, education, interracial harmony, and confidence in religion. He encouraged the Nizari Ismailis settled in the industrialized world to contribute towards the progress of communities in the developing world through various development programs.
He founded ‘Nation Media Group’, a Kenyan media company, and has also been involved in other business ventures such as luxury hotels. He owns and operates the largest horse racing and breeding operation in France, and other breeding/stud farms in Europe.
He is the founder and chairman of the ‘Aga Khan Development Network (AKDN)’, one of the largest private development networks in the world. AKDN agencies operate in the fields of health, education, culture, rural development, institution-building and the promotion of economic progress, mostly in the developing countries.
He is a leading business magnate and owns hundreds of racehorses, valuable stud farms, an exclusive yacht club on Sardinia, a private island in the Bahamas, two Bombardier jets, a £100 million high speed yacht, and several estates around the world. 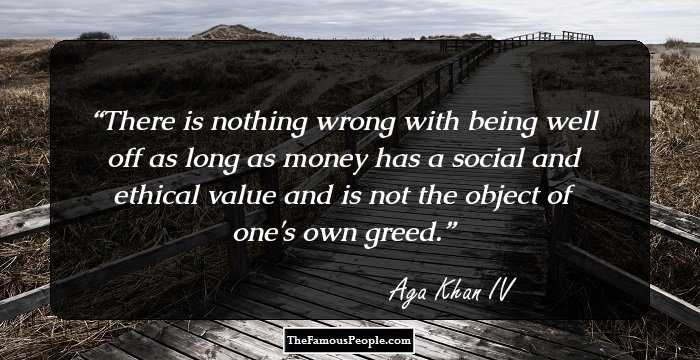 Quotes: Money
Major Works
The Aga Khan Development Network (AKDN) founded by him is one of the largest private development networks in the world. The network employs approximately 80,000 paid staff and operates in the fields of health, education, culture, rural development, institution-building and the promotion of economic development, with special focus on countries of the Third World.
Awards & Achievements
In 1977, he became the first Muslim to receive the honor of ‘Knight Grand Cross of the Order of Merit of the Italian Republic’.
In 1984, he was awarded the ‘Thomas Jefferson Memorial Foundation Medal in Architecture’ by the University of Virginia.
Continue Reading Below
In 1996, he received the prestigious ‘Hadrian Award’ from World Monuments Fund, United States.
In 2005, he was presented with the prestigious ‘Carnegie Medal for Philanthropy’.
In 2009, he was named the ‘Philanthropic Entrepreneur of the Year’ by Le Nouvel Economiste, Paris.
In 2013, he was awarded a ‘Gold Medal’ by the Royal Architectural Institute of Canada.
From 2009 to 2013, he was included in the list of ‘One of The 500 Most Influential Muslims in the world’ by the ‘Royal Islamic Strategic Studies Centre’, Jordan.
In 2015, he was awarded ‘Padma Vibhushan’, the second highest civilian award in the Republic of India.
He has been the recipient of numerous honorary degree from universities around the world including the ‘University of Toronto’, ‘University of Sankore’, ‘University of London’, ‘Harvard University’, and ‘University of Cambridge’. 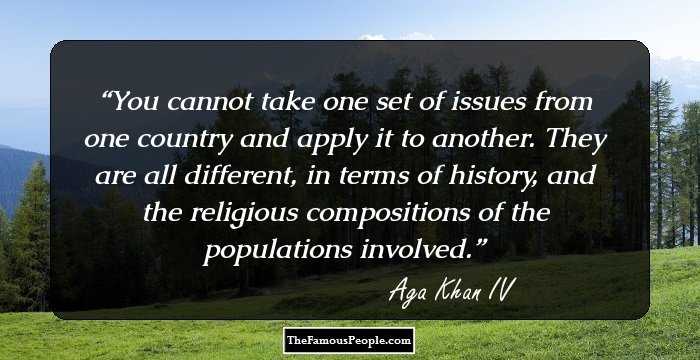 Quotes: You, History
Personal Life & Legacy
In 1969, he married a former British model Sarah Frances Croker-Poole, who assumed the title of ‘Begum Salimah Aga Khan’. They had three children; one daughter, Princess Zahra Aga Khan, and two sons, Prince Rahim Aga Khan and Prince Hussain Aga Khan.
The couple remained married for 25 years but they separated in 1984 after he became engaged in multiple extra-marital affairs. Their marriage officially ended in 1995, after 11 years of separation.
In 1998, he got married to Gabriele zu Leiningen, who assumed the title of ‘Begum Inaara Aga Khan’. The couple had a son, Prince Aly Muhammad Aga Khan, born in 2000. This marriage also ended due to his infidelity. The couple filed for divorce which was finalized after several years in 2014.