(English Monk at the Monastery of St. Peter, Best Known for His Work 'Ecclesiastical History of the English People')
Advanced Search

Saint Bede, or Venerable Bede as he was known as, was an English monk, scholar, author and a teacher who is known to be the greatest Anglo-Saxon scholar. He was one of the few saints who enjoyed an honourable status even during his lifetime. Well versed, Bede wrote extensively, his works being categorized into grammatical and scientific works, scriptural commentary, and historical and biographical works. Though he penned more than 40 books in his lifetime, his best came with ‘Historia ecclesiastica gentis Anglorum’. The book proffers to be the indispensible source to the history of the conversion to Christianity of the Anglo-Saxon tribes. It was for this work that he gained the title of ‘The Father of English History’. What’s more, his linguistic skills helped him translate the early works in Latin and Greek, thus making them accessible to Anglo-Saxons and eventually contributing to English Christianity. Apart from being an author, teacher and writer, Bede was an accomplished singer as well as a reciter of poems. Furthermore, he popularized the method of dating events from the time of the incarnation, or Christ’s birth (AD) through his book, ‘Historia ecclesiastica’ and the two works on chronology. Matthew Henry
DID WE MISS SOMEONE?
CLICK HERE AND TELL US
WE'LL MAKE SURE
THEY'RE HERE A.S.A.P
Quick Facts

British People
Theologians
Spiritual & Religious Leaders
British Men
British Saints
Childhood & Early Life
Saint Bede was born in Monkton, Durham. According to the information provided in the autobiographical chapter of his work ‘Historia ecclesiastica’, he was born on 672 AD. It is believed that he belonged to a noble family.
When Bede turned seven, he was sent to St. Benedict Biscop, who had founded the Monastery of St Peter at Monkwearmouth, to be educated by the latter. It is not known whether Bede intended to be a monk but as per the practice followed by young boys of noble family in Ireland, it was natural for Bede to follow suit.
In 682 AD, he was transferred to the Monastery of Jarrow, Monkwearmouth's sister monastery founded by Ceolfrith. It is assumed that he made first-hand contribution in building the original church at Jarrow.
In 686 AD, a plague broke out in Jarrow which left only two surviving monks who could be entrusted with the duties of the office. The two surviving monks were Ceolfrith and Bede. With Ceolfrith, Bede managed to do the entire service of the liturgy. 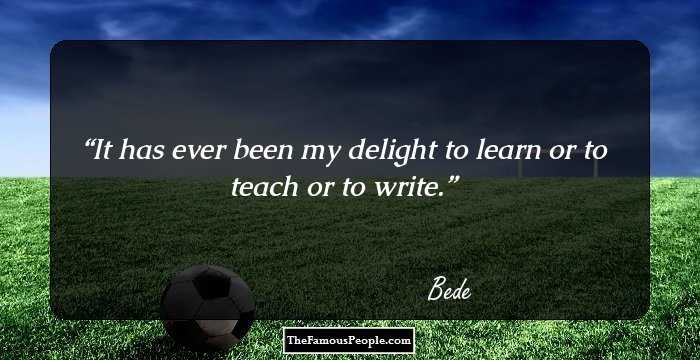 The Hottest Male Celebrities With The Best Abs
Career
In 692 AD, at the age of nineteen, he was ordained a deacon by his diocesan bishop, John, who was bishop of Hexham. This was a remarkable feat attained by Bede, given that the canonical age for the ordination of a deacon was 25; his exceptional abilities aiding in the process.
When Bede turned 30, he was ordained a priest by Bishop John. At this time, he was well versed with all the subjects including commentaries of the bible, poetry, music, observation of nature, the philosophical principles of Aristotle, astronomy, arithmetic, grammar, ecclesiastical history, the lives of the saints and, especially, the Holy Scripture.
In 701 AD, Bede came up with his work, titled ‘De Arte Metrica and De Schematibus et Tropis’. Meant for classroom use, this was the first of the many works by Bede.
In 703 AD, he penned his first treatise on chronology, titled ‘De Temporibus’ (‘On Times’). Following this, in 725 AD, he completed a bigger and improved version of ‘De Temporibus’ which was titled, ‘De Temporum Ratione’. Both the books concerned with the reckoning of Easter, the latter including a much larger chronicle.
His foremost biblical commentary was on the Revelation to John. Through this work, he aimed to transmit and explain relevant passages from the Fathers of the Church. His interpretations were metaphorical in content. Using critical judgment, he attempted to rationalize discrepancies.
Bede’s magnum opus came in 731AD with his work, ‘Historia ecclesiastica Gentis Anglorum’ or ‘The Ecclesiastical History of English People’. Divided into five books, the series is a main source for the understanding the arrival of Christianity in early British history.
‘Historia ecclesiastica’ recorded crucial events of history right from the raids by Julius Caesar to the arrival of St Augustine in Kent and the progress of Christianity in England. Additionally it became the first book of history in which the AD system of dating was used.
In 733 AD, he moved to York to visit Ecgbert, Bishop of York. This was his first visit outside Monkwearmouth-Jarrow area. During the he discussed the proposal of the elevation of the See of York to an archbishopric which finally was realized in 735 AD.
Apart from York, he visited Lindisfarne, stopping over the relatively lesser known monastery of Wicthed, a monk. During this time, he came up with the prose that gave a glimpse of the life of St. Cuthbert, Bishop of Lindisfarne
In his life, he completed over 40 books, most of which have survived. His last-surviving work is a letter to Ecgbert, Bishop of York, his former student, which he penned in 734 AD.
Major Works
Saint Bede’s best known work was his book, ‘Historia ecclesiastica gentis Anglorum’ or ‘The Ecclesiastical History of the English People’. Divided into five books, it gives a wide overview of history of England, beginning with Caesar’s invasion. It follows the progress of Christianity, its growth in parts of England and the missionary works in different parts of Britain. The book also gives an account of the conflict with the British church over the correct dating of Easter.
Awards & Achievements
For his magnum opus work, ‘Historia ecclesiastica gentis Anglorum’, Bede was conferred with the title, ‘The Father of English History’
In 1899, he became the only native of Great Britain to be made Doctor of the Church by Pope Leo XIII
Personal Life & Legacy
Bede’s marital status remains dubious. Though it is widely believed that he remained a bachelor all through, two of his writings somewhat contradict the belief. Both in ‘Commentary on the Seven Catholic Epistles’ and ‘Commentary on Luke’, he mentions having a wife in first person.
Bede suffered from ill health during the last days of his life. He faced frequent bouts of breathlessness that left his breathing worse and his feet swelled. He passed away on May 26, 735 AD and was buried at Jarrow.
His remains were transferred to Durham Cathedral in the 11th century. However, after the tomb was looted in 1541, they were re-interred in the Galilee chapel at the cathedral.
Trivia
Interestingly, Bede composed a five-line poem on his deathbed which is popularly known till date as ‘Bede’s Death Song’. The song has been a widely copied Old English poem, and appears in 45 manuscripts.
You May Like

See the events in life of Bede in Chronological Order