Born In: City of London

Sir Thomas More was an English social philosopher and statesman who served as a councilor to King Henry VIII and Lord High Chancellor of England from 1529 to 1532. A noted Renaissance humanist and a staunch Catholic, he opposed the Protestant Reformation, in particular the theology of Martin Luther and William Tyndale. Born as the son of a prominent lawyer, More followed in his father’s footsteps and obtained a legal education. Eventually he entered the King’s services and became one of his most trusted and respected civil servants. Over a period of time he also gained a reputation as a scholar and penned down several works, the most well-known one being ‘Utopia’. An important member of the English court, he vehemently opposed King Henry VIII’s separation from the Catholic Church and refused to acknowledge the annulment of the King’s marriage to Catherine of Aragon. His relationship with the King deteriorated greatly when he declined to acknowledge the King as Supreme Head of the Church of England and refused to take the Oath of Supremacy. This led the King to arrest him and have him tried for treason. He was convicted and sentenced to death. Centuries later he was declared a martyr and canonized by Pope Pius XI Born In: City of London

Arius
DID WE MISS SOMEONE?
CLICK HERE AND TELL US
WE'LL MAKE SURE
THEY'RE HERE A.S.A.P
Quick Facts

British People
British Spiritual & Religious Leaders
Aquarius Men
Childhood & Early Life
Thomas More was born on 7 February 1478 to Sir John More and his wife Agnes. His father was a successful lawyer who later became a judge.
Thomas received a good upbringing and was sent to one of the city’s finest schools, St. Anthony’s School, for his education.
He became a household page to John Morton, the Archbishop of Canterbury and Lord Chancellor of England in 1490 and served him for two years. Morton was much impressed by More and nominated him for a place at Oxford University.
He started studying at Oxford in 1492. His teachers included the likes of Thomas Linacre and William Grocyn under whom he excelled in Latin and Greek. He left Oxford after a couple of years to pusue legal education.
After receiving legal training at New Inn, one of the Inns of Chancery, he became a student at Lincoln’s Inn, one of England's four legal societies, in 1496. After completing his training in 1502, Thomas More was called to the Bar. 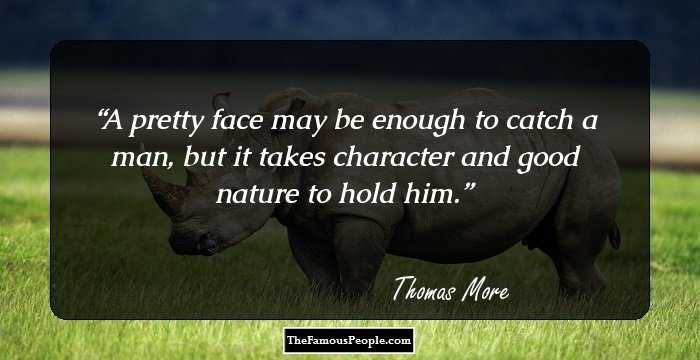 Quotes: Nature, Character
Continue Reading Below
Later Life
In 1510, More was selected as one of the two undersheriffs of the City of London. This was a role that carried considerable responsibility and More soon became known for his honesty and hard work.
He became Master of Requests in 1514 and was appointed Privy Councilor the same year. Along with Thomas Wolsey, Cardinal Archbishop of York, he went on a diplomatic mission to Calais and Bruges to meet the Holy Roman Emperor, Charles V.
In 1521, he was knighted and made under-treasurer of the Exchequer. Having entered King Henry VIII’s services in 1517, he had by this time become one of the King’s most trusted civil servants. He also acted as the King’s secretary, chief diplomat, and personal advisor.
He was elected as knight of the shire (MP) for Middlesex in 1523. More had a cordial relationship with Wolsey on whose recommendation he was elected the Speaker in the House of Commons.
His political influence continued growing and he became the Chancellor of the Duchy of Lancaster in 1525. Within a period of four years he succeeded Wolsey to the office of Chancellor in 1529.
More supported the Catholic Church and was completely opposed to the Protestant Reformation which he viewed as heresy. As the Chancellor he yielded considerable power, and during his tenure six people were burned at the stake for heresy. He also wrote several pamphlets against heresy and banned unorthodox books.
After being a trusted advisor to the King for so long, More’s relationship with the King began to deteriorate during the 1530s. The King was desperate to have his marriage with Catherine of Aragon annulled but More refused to sign a letter asking Pope Clement VII to annul Henry's marriage as he was opposed to the idea of ending a marriage. He also quarreled with the King over the heresy laws.
In view of his worsening relations with the King, More resigned from his position as the Chancellor in 1532, citing health reasons.
In 1534, Thomas More was asked to take the Oath of Supremacy which required him to swear allegiance to the monarch as Supreme Governor of the Church of England. He refused to take the oath stating that he would never consider a temporal man to be the head of spirituality. This greatly angered the King who had him arrested and tried for high treason. 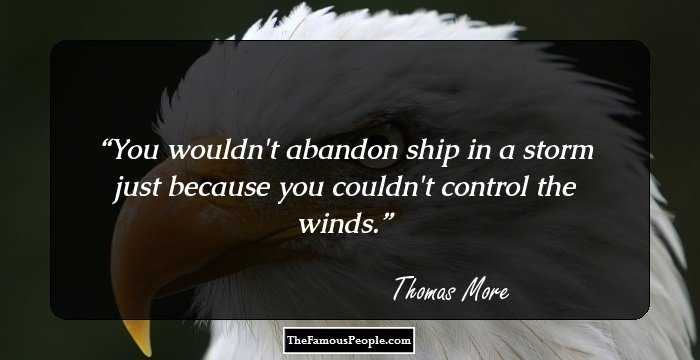 Quotes: You
Major Works
His best known and most controversial work is the book, ‘Utopia’. Written as a work of fiction and political philosophy, the book is a frame narrative depicting a fictional society and its religious, social and political customs. The book, which discusses the idea of a perfect society, is generally interpreted as More’s criticism of contemporary European society.
Personal Life & Legacy
Thomas More married Jane Colt in 1505. He tutored his wife in literature and music as she was not much educated at the time of their marriage. The couple had four children: Margaret, Elizabeth, Cicely, and John.
Jane died in 1511. More remarried within 30 days of her passing. His second wife was a rich widow named Alice Harpur Middleton. This marriage did not produce any children though he adopted Alice’s daughter from a previous marriage as his own.
More was an advocate of women’s education which was highly unusual for his time. He insisted that his daughters receive the same high quality education as his son.
After being arrested by the King for his refusal to take the Oath of Supremacy, he was put on trial for high treason and tried under the Treason Act 1534. He was convicted and sentenced to death. He was beheaded on 6 July 1535.
Pope Leo XIII beatified Thomas More in December 1886, and Pope Pius XI canonized him in May 1935. 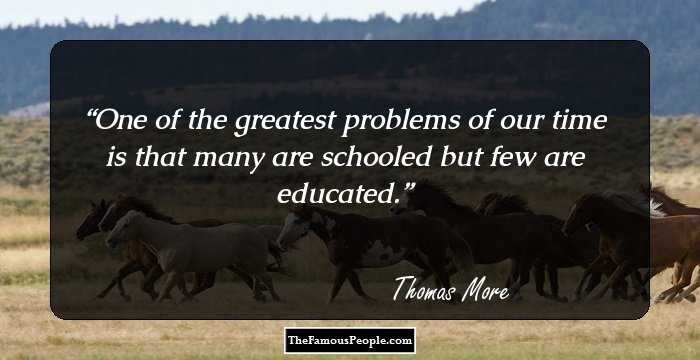 Quotes By Thomas More | Quote Of The Day | Top 100 Quotes

See the events in life of Thomas More in Chronological Order