John Emerich Edward Dalberg-Acton, better known as Lord Acton, was an English Catholic historian and politician who had once served as a Member of Parliament for Bridgnorth and Carlow Borough. He was called the ‘magistrate of history’ and considered to be one of the most prominent and learned Englishmen of the 19th century. He was well versed in several languages like English, French, German and Italian and was personally acquainted with several noted historians and philosophers from Europe and America. He is very famous for his remark, ‘Power tends to corrupt, and absolute power corrupts absolutely’. He was an independent scholar who believed in the using scientific methods to study history and also played a significant role in the liberal Catholic movement. He studied under the noted church historian Ignaz von Dollinger and was deeply influenced by him. He was interested in politics from an early age and became a member of the House of Commons from the Irish constituency of Carlow. He spent much of his time traveling around the intellectual centers in the Europe and the United States. A strong defender of religious and political freedom, he served as the editor of the journal ‘The Rambler’ and wrote extensively on topics related to social, political, and religious ideas and issues. British Celebrities
British Men
Ludwig Maximilian University Of Munich
Male Leaders
British Leaders
Childhood & Early Life
He was born in Italy into an ancient Roman Catholic family. His father was Sir Richard Acton, a descendent of an established English line while his mother, Countess Marie Louise de Dalberg was from a Rhenish family in Germany.
His father died when Acton was just three years old. Three years later his mother married Lord George Leveson (later known as Earl Granville) and the family moved to Britain.
He learnt to speak English, German, Italian and French while still young. He studied under Dr. Wiseman at St. Mary’s College at Oscott until 1848. Then he went to Edinburgh where he received private tutoring.
He aspired to attend Cambridge but could not procure admission because of his being a Catholic. So, he was sent to Munich, Germany to study under the famous theologian Johann Joseph Ignaz von Dollinger who instilled in the young man a deep love for historical research. 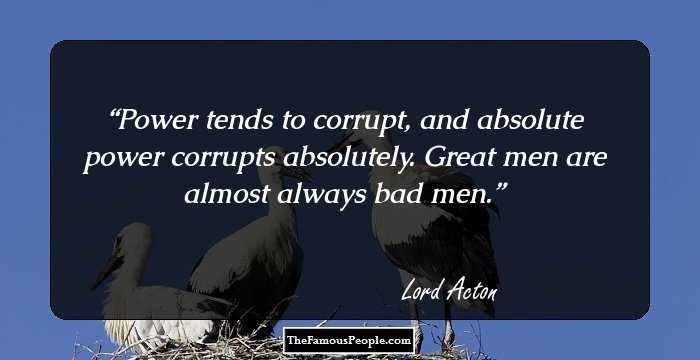 The Hottest Male Celebrities With The Best Abs
Career
In 1855, he was appointed as the Deputy Lieutenant of Salop. His stepfather, the Lord Granville had several prominent political connections and with him Lord Acton traveled to Moscow as British representative at the coronation of Alexander II of Russia.
His stepfather helped him enter politics and he became a member of the House of Commons from the Irish constituency of Carlow in 1859. He was an ardent supporter of the Prime Minister William Ewart Gladstone. His parliamentary career ended after the general election of 1865 in which he lost his seat.
He became the editor of the Roman Catholic monthly paper, ‘The Rambler’ in 1859. He wrote several pieces for the paper on social, political and religious topics and soon gained a reputation as a strong supporter of religious and political freedom. He merged the paper into the ‘Home and Foreign Review’ in 1862.
He came into conflict with the Roman Catholic hierarchy because of his independent thought and liberalism and the paper was censured by Cardinal Wiseman forcing Acton to stop publishing the paper. However, he continued writing and contributed regularly to ‘North British Review’ and ‘The Chronicle’.
He was awarded a peerage by Queen Victoria in 1869. This social elevation was primarily granted because of the influence of the Prime Minister Gladstone; the two men were good friends who held each other in high esteem.
He believed in searching for historical and philosophical truth by way of scientific enquiry. He worked on discovering the relationship between history, religion, and liberty all through the 1870s and 1880s and his thoughts on the subjects evolved.
Along with his mentor Dollinger, he opposed the First Vatican Council’s moves to disseminate the doctrine of papal infallibility in 1870. He even went to Rome to lobby against it albeit unsuccessfully.
He was a man of knowledge who loved to read, study and learn. But, in spite of his vast knowledge, he was not a prolific writer.
Two of his lectures on ‘The History of Freedom in Antiquity’ and ‘The History of Freedom in Christianity’ which he delivered at Bridgnorth in 1877 were among his few published works.
In 1878, his essay on ‘Democracy in Europe’ was published in the ‘Quarterly Review’.
He was made the Regius Professor of Modern History in Cambridge in 1895. He delivered his inaugural lecture on ‘The Study of History’ which was later published with notes.
Major Works
He was a famous Catholic historian regarded as the most learned Englishman of his times. He advocated the use of scientific enquiries in studying history and strongly supported the religious and political freedom of the individual.
Awards & Achievements
He was awarded an honorary degree of Doctor of Philosophy by the University of Munich in 1872 and the honorary degree of Doctor of Laws by Cambridge in 1888.
Personal Life & Legacy
He married Countess Marie Anna Ludomilla Euphrosina von Arco auf Valley in 1865. The couple had six children.
He died in 1902 after an illness.
Trivia
This great intellectual gave the famous remark, "Power tends to corrupt, and absolute power corrupts absolutely."
Recommended Lists:
Leaders #2355
You May Like

See the events in life of Lord Acton in Chronological Order