(43rd President of the United States)

Advanced Search
George Walker Bush is an American businessman and politician who served as the 43rd president of the United States. He served as the president for two consecutive terms, from 2001 to 2009. He is the son of George Herbert Walker Bush, the 41st president of the United States. The political association of his family doesn’t end here; his grandfather, Prescott Bush, was the U. S. senator from Connecticut. After completing his schooling in Massachusetts, George W. Bush graduated with a B. A. degree in history from ‘Yale University’ and then went on to ‘Harvard Business School’ to do his M.B.A. In 1968, he was commissioned into the ‘Texas Air National Guard’ and was honorably discharged after six years of service. He married Laura Lane Welch and the couple shifted to Midland, where George W. Bush founded a series of small, independent oil exploration companies. He helped his father George H. W. Bush in both of his presidential campaigns before becoming the governor of Texas himself. He was the Republican candidate for 2000 presidential elections and won the election by defeating Democrat nominee Al Gore. Four years later, he was re-elected when he defeated Democrat John Kerry. Jeb Bush
DID WE MISS SOMEONE?
CLICK HERE AND TELL US
WE'LL MAKE SURE
THEY'RE HERE A.S.A.P
Quick Facts

awards: NME Award for Villain of the Year

American People
Political Leaders
American Men
Yale University
Harvard University
Childhood & Early Life
George W. Bush was born on July 6, 1946, in New Haven, Connecticut, USA, to George Herbert Walker Bush and Barbara Pierce. He had five younger siblings – Jeb, Neil, Marvin, Dorothy, and Robin. His sister Robin passed away at the age of three due to leukemia.
His grandfather, Prescott Bush, was a US senator from Connecticut. Bush’s father, Bush Sr., held the US vice-president’s office for two terms in the 1980s and then became the 41st US president in 1989.
He received his schooling from ‘Kinkaid School’ in Houston and ‘Phillips Academy’ in Massachusetts. He graduated from ‘Yale University’ in 1968 with B.A. degree in history and enlisted in the ‘Texas Air National Guard’ from where he was honorably discharged in 1974.
While on his guard duty, he started attending ‘Harvard Business School’ in 1973 and graduated in 1975 with a master’s of business administration degree. 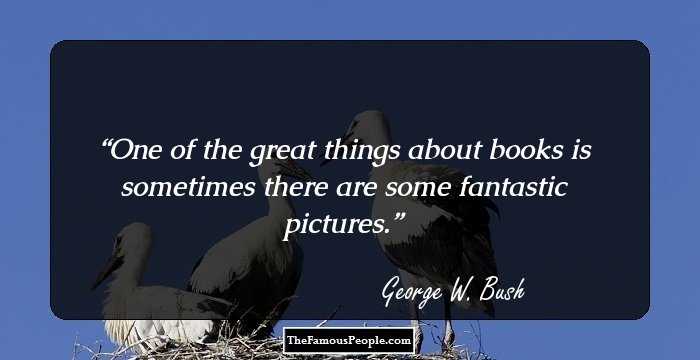 Quotes: Books
Continue Reading Below
Career
After completing his MBA, George W. Bush returned to Midland and entered the oil business. In 1979, he created ‘Arbusto Energy’ and sold the company in 1986.
In 1988, he shifted to Washington D.C. to help his father in his campaign for presidency, which turned out to be successful. Bush Sr. again called out for his eldest son to manage his 1992 presidential re-election, but this time their luck ran out and Bush Sr. lost.
In 1994, George W. Bush ran for the office of governor of Texas and won the election by defeating the incumbent governor and Democrat candidate, Ann Richards. His election campaign focused on welfare, reforms, crime reduction, and improvement of education.
As governor he raised the salaries of the teachers, implemented policies that reduced domestic violence, and allocated funds to organizations that educated people about the (side) effects of drug usage.
In 1998, he won the re-election with a big mandate and became the first governor in Texas history to hold two consecutive four-year terms. In 1999, with the implementation of a new law, Texas became the leading producer of wind powered electricity in the US.
He announced his candidacy for the U.S presidency in 1999 and became the Republican Party’s nomination, with Dick Cheney as his running mate. The Democratic Party’s nominee was Al Gore, the incumbent vice-president.
The 2000 presidential election results were close and controversial. After a month of inconclusiveness, the Supreme Court intervened and declared Bush the winner on the basis of electoral votes.
His first administrative success was the passing of the ‘No Child Left Behind Act’ in 2001. The Act was brought in to bridge the gap between rich and poor student performance and also to raise the standard of schooling being imparted.
On September 11, 2001, ‘Al Qaeda’ terrorists crashed four hijacked planes in New York and Washington DC, killing around 3,000 American citizens. The attacks were linked to Osama Bin Laden, the leader of ‘Al Qaeda,’ and George W. Bush declared a war on terror.
Continue Reading Below
In October 2001, U.S forces entered Afghanistan as the then Taliban regime, which was at the helm in Afghanistan, was training the ‘Al Qaeda’ terrorists. The regime had also given shelter to Osama bin Laden, the mastermind behind the 9/11 attack.
To make sure that America never witnesses another terrorist attack, he created the ‘Homeland Security Department’ and passed the ‘Patriot Act.’
In March 2003, George W. Bush ordered the U.S forces to invade Iraq as he believed that the Iraqi ruler Saddam Hussein was developing weapons of mass destruction. Saddam Hussein was deposed and in 2005, free democratic elections were held in Iraq.
In the 2004 presidential election, he won 286 electoral votes and defeated Democrat John Kerry.
His second term started on the worst possible note as Hurricane Katrina devastated the Gulf Coast of the United States and took around 1,800 lives and damaged property worth billions. He received severe criticism for the slow handling of the disaster from the ‘Democratic Party’ and citizens alike.
In 2008, in the final year of his presidency, the U.S. was hit with a severe credit crisis that sent the stock market into free fall and led to massive layoffs. The Bush administration responded to the crisis by enacting a controversial $700 billion ‘Emergency Economic Stabilization Act’ to bail out the housing and banking industries.
He left office in 2009 and settled in Dallas, Texas with his wife. He was succeeded by Barack Obama.
On November 11, 2014, Bush published a biography of his father titled ‘41: A Portrait of My Father.’
Bush released a book of his own portraits of veterans titled ‘Portraits of Courage’ in February 2017.
Continue Reading Below
He partnered with former presidents Jimmy Carter, George H. W. Bush, Bill Clinton, and Barack Obama to work with ‘One America Appeal’ to help the victims of Hurricane Harvey and Hurricane Irma in the Gulf Coast and Texas in September 7, 2017. 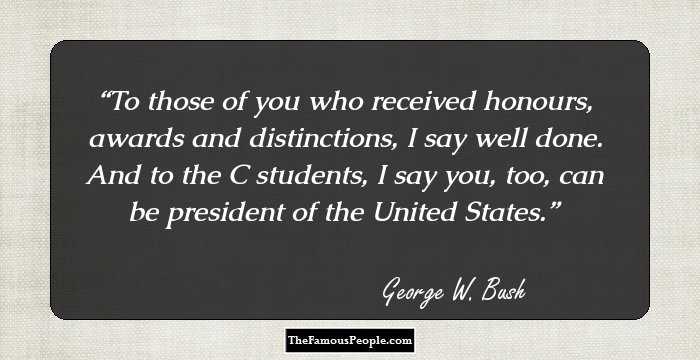 Quotes: You, Awards, I
Major Works
Before the completion of George W. Bush’s first year as president at the White House, America was devastated by the September 11, 2001 attacks. Bush promised the people that justice would be done to the victims who lost their lives. He launched a scathing attack called the ‘War on Terror’ to dismantle the ‘Taliban’ and capture/kill Osama Bin Laden. Subsequently, the US military invaded Afghanistan in 2001.
In 2003, he ordered the U.S military forces to invade Iraq as the U.S. believed that the then Iraqi ruler Saddam Hussein was developing weapons of mass destruction. The U.S forces deposed Saddam Hussein and in 2005, free democratic elections were held in Iraq for the first time in 50 years.
Awards & Achievements
George W. Bush was named the ‘Person of the Year’ by ‘Time’ magazine in 2000 and 2004.
In 2005, Latvian President Vaira Vīķe-Freiberga awarded him the ‘Order of the Three Stars.’ In 2012, Estonian President Toomas Hendrik Ilves bestowed him with the ‘Order of the Cross of Terra Mariana.’ 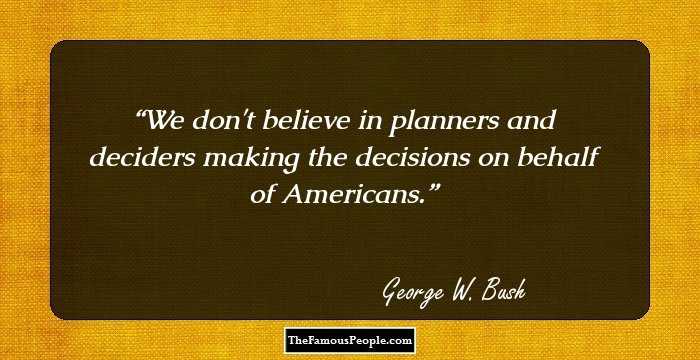 See the events in life of George W. Bush in Chronological Order