(Former First Lady of the United States as the Wife of President George H. W. Bush)

Advanced Search
Barbara Bush was the wife of the 41st President of the United States, George H. W. Bush, and the mother of the 43rd President, George W. Bush. She served as the First Lady of the United States from 1989 to 1993, and was the Second Lady of the United States from 1981 to 1989. She is one of the only two women to be both a wife and a mother to a president of the United States, the other one being Abigail Adams. Born into a well-to-do family in New York City, she grew up to be an athletic and smart young girl with a keen interest in reading. She met her future husband, George Herbert Walker Bush, when she was just 16 and married him a few years later while he was serving as a naval officer in World War II. She fully supported her husband’s career when he eventually moved into politics and became involved in advancing social causes like universal literacy. While serving as the First Lady she founded the Barbara Bush Foundation for Family Literacy and continued promoting this cause even after leaving the White House. Along with her involvement in the foundation, she also served on the Boards of AmeriCares and the Mayo Clinic. Dorothy Bush Koch
8th June In History
DID WE MISS SOMEONE?
CLICK HERE AND TELL US
WE'LL MAKE SURE
THEY'RE HERE A.S.A.P
Quick Facts

awards: Glamour Award for The Generations

American Celebrities
Smith College
American First Ladies
Gemini Women
Childhood & Early Life
Barbara Bush was born as Barbara Pierce on June 8, 1925, in New York City as the third child of Pauline and her husband Marvin Pierce. Her father later became the president of McCall Corporation, the publisher of the popular women's magazines ‘Redbook’ and ‘McCall's’.
She went to the Rye Country Day School from 1931 to 1937 and later studied at Ashley Hall in Charleston, South Carolina from 1940 to 1943. She was an athletic young girl who enjoyed swimming, tennis, and bike-riding. She also loved to read.
She met George Herbert Walker Bush, a student at Phillips Academy in Andover, Massachusetts during a dance over Christmas vacation when she was 16. The two began dating and eventually married in 1945 while George was on leave during his deployment as a naval officer in World War II. 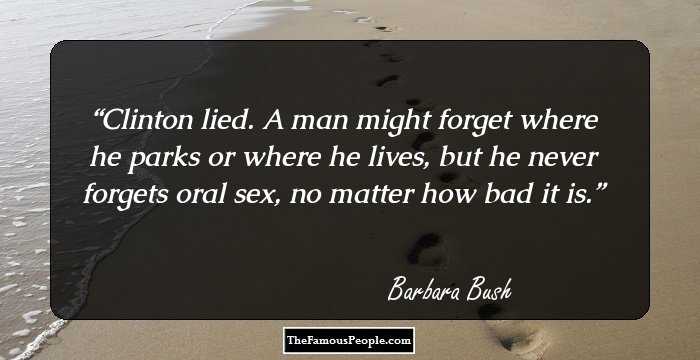 Quotes: Never
Continue Reading Below
Later Years
The young couple moved frequently during the initial years of their marriage due to George’s naval career. They were blessed with six children over the next few years, and Barbara settled into a hectic life as a wife and a mother.
Her husband graduated from Yale University after the World War II and moved the family to Texas. George H.W. Bush ventured into the oil business, and soon became a successful businessman. He eventually founded the Zapata Corporation.
Barbara managed their house and took care of the children while George was away on business. She was a very loyal wife and a dedicated mother to her children.
Along with his business interests, George ventured into politics as well. Once again Barbara supported him wholeheartedly. He ran for the U.S. Senator from Texas in 1964 and even though he lost, this campaign helped him gain national recognition.
George Bush was elected as a U.S. Representative in Congress from Texas two years later in 1966, marking the beginning of a successful political career. Bush rose through the political ranks over the ensuing years and Barbara supported him in every way she could.
As a politician’s wife, she became involved in various charities and Republican women's' groups in Washington, D.C. Following her husband’s appointment as the United States Ambassador to the United Nations, she became acquainted with prominent diplomats and developed friendships with them.
In 1981, George Bush became the Vice President under the administration of President Ronald Reagan and Barbara Bush became the Second Lady. In this position, she began working with several literacy organizations and soon became a popular household name. She also became a confident public speaker and endeared herself to the masses with her witty sense of humor and approachability.
Vice President Bush announced his candidacy for president to succeed Ronald Reagan in 1988. Barbara played an active role in her husband’s campaigns and herself addressed the national party convention. George Bush was elected as the president and assumed the office on January 20, 1989, thus elevating Barbara Bush to the position of the nation’s First Lady.
As the First Lady, Barbara Bush intensified her involvement with literary organizations and served on many literary committees. She supported programs where parents were encouraged to read along with their young children, and stressed the importance of reading aloud to children. Eventually, she helped develop the Barbara Bush Foundation for Family Literacy.
Continue Reading Below
She became involved with the White House Historical Association and worked to revitalize the White House Preservation Fund, which she renamed the White House Endowment Trust. She successfully raised $25 million for the trust which raises funds for the refurbishment and restoration of the White House. She was well loved by the public as she came along as a simple lady who was deeply devoted to her family and nation.
Barbara Bush was very actively involved with charities and when she received the Henry G. Freeman Jr. Pin Money Fund of $36,000, she gave most of it to her favorite charities.
Her husband stepped down as the president on January 20, 1993, succeeded by Bill Clinton, and the couple left the White House. Barbara Bush continued her work with the literary organizations now that she was free of her responsibilities as the First Lady. 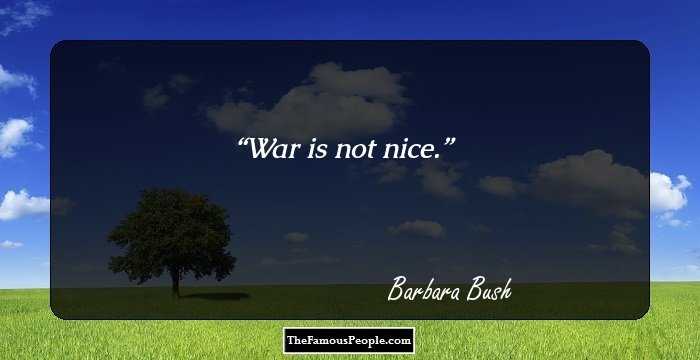 Quotes: War
Major Works
Barbara Bush was involved with literacy organizations. As the First Lady, she helped develop the Barbara Bush Foundation for Family Literacy which was formed with the aim of encouraging low-income parents to read along with their children. Some of the funding came from the proceeds of a book she wrote about the Bush family dog, Millie.
Awards & Achievements
Barbara Bush received the ‘Award for Greatest Public Service Benefiting the Disadvantaged’, from the Jefferson Awards, in 1995.
She was honored with ‘The Miss America Woman of Achievement Award’ for her work with literacy programs, in 1997. 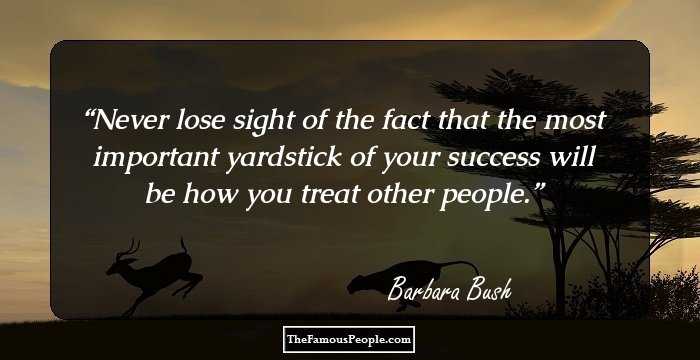 Quotes: You, Never, Will
Personal Life & Legacy
She met George Herbert Walker Bush when she was just 16 years old. They started dating and got married a few years later on January 6, 1945. They had six children, including daughter Robin who died of leukemia at the age of four, and son George Bush who became the 43rd President of the United States.
The death of her daughter at such a young age devastated Barbara and inspired her to care more for the underprivileged. This is one of the reasons the former First Lady was so dedicated towards social causes.
She died at her home in Houston, Texas on April 17, 2018, at the age of 92. She was suffering from chronic obstructive pulmonary disease and congestive heart failure.
Several schools have been named in her honor. The Barbara Bush Library in Harris County, Texas, and the Barbara Bush Children's Hospital at Maine Medical Center in Portland, Maine, are also named after her.

See the events in life of Barbara Bush in Chronological Order