Born In: The Strand, London, England

Francis Bacon, 1st Viscount St Alban, was an English statesman, lawyer, and philosopher considered an influential figure in the scientific revolution. An eloquent writer, he wrote extensively on topics ranging from law and religion to contemporary politics and ethics. The son of Sir Nicholas Bacon and Anne, a scholar, he grew up in an environment that valued education and intellectual discussions. He was educated at the University of Cambridge. He qualified as a lawyer and pursued a legal career for some time before venturing into politics. Over the years, he became known as a liberal-minded reformer who opposed feudal privileges and dictatorial powers. He was also against religious persecution. He had close ties with the royalty and went on to become the first Queen's Counsel designate. He was eventually appointed attorney general during the reign of James I and continued to rise in stature in the coming years. Despite having a successful career and a position of power in society, he was plagued by financial woes. He fell into deep debt and was charged with several cases of corruption, following which his high-profile career ended in disgrace. As a philosopher, he left behind a rich legacy in scientific, juridical, religious, and literary works. Born In: The Strand, London, England

Roger Bacon
DID WE MISS SOMEONE?
CLICK HERE AND TELL US
WE'LL MAKE SURE
THEY'RE HERE A.S.A.P
Quick Facts

Francis Bacon was born on 22 January 1561, in London, to Sir Nicholas Bacon and his second wife, Anne Cooke. His father was the Lord Keeper of the Great Seal during Queen Elizabeth I’s reign, and his mother, a highly educated woman for her era, was a scholar. The noted Renaissance humanist Anthony Cooke was his maternal grandfather.

He was a sickly child and was thus educated at home for a few years. He later went to study at Trinity College at the University of Cambridge. There, Francis and his brother Anthony received personal training under the tutelage of Dr. John Whitgift.

Francis entered de societate magistrorum at Gray's Inn in 1576. Later, he travelled abroad and visited France, Italy, and Spain. He continued his education during his trips and also took up a few diplomatic tasks. His father died suddenly in 1579 and Francis had to return home. 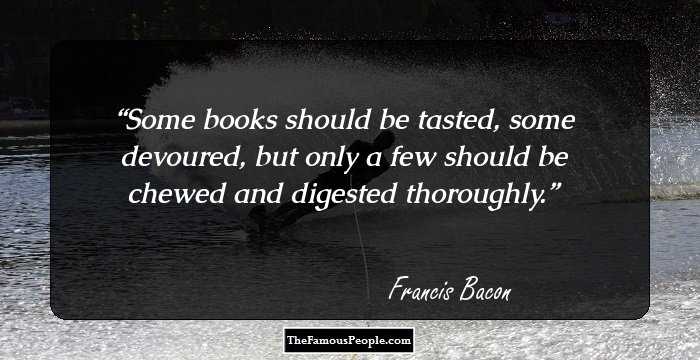 In 1579, Francis Bacon took up his residence in law at Gray's Inn to support himself while looking for a better position. In 1581, he was elected Member of Parliament (MP) for Bossiney, Cornwall, and the following year, he was admitted as an outer barrister.

He began his involvement in high politics in the mid-1580s when he wrote the political memorandum, A Letter of Advice to Queen Elizabeth, in 1584. He was dissatisfied with the system of sciences prevalent during that time and wanted to formulate a new system emphasizing empirical methods. However, Queen Elizabeth wasn’t in favor of this.

His legal career thrived in the 1580s as did his political career. He was elected to a seat in Parliament for Melcombe in 1584. He was actively involved in the investigation of English Catholics and called for strict action against Mary, Queen of Scots.

He was a member of many committees, including the one to revise the laws of England. He became MP for Liverpool in 1588 and Middlesex in 1593. In the ensuing years, he represented Ipswich thrice and Cambridge University once.

In the 1590s, he was also engaged in numerous scholarly and literary pursuits besides his political career. He gained popularity as a liberal-minded reformer who opposed feudal privileges and dictatorial powers despite having good relations with the royalty.

In 1597, Queen Elizabeth reserved him as her legal counsel, making him the first Queen's Counsel designate. He also received a patent that gave him precedence at the bar. His professional relationship with the queen steadily improved over the years.

Queen Elizabeth died in 1603 and James I succeeded her to the throne of England. Francis Bacon earned the favors of James as well. Bacon was knighted in 1603 and made the solicitor general in 1607.

He finally bagged the coveted position of attorney general in 1613. He held much influence over the king, and this earned him several enemies in the court.

In 1617, he was appointed as temporary Regent of England, and the following year, he was created Baron Verulam, of Verulam, in the Peerage of England.

Despite having a high-profile career, Francis Bacon struggled with financial woes and huge debts. He was then charged with 23 separate counts of corruption and sentenced to a fine of £40,000. The king pardoned his fine, but this disgrace ended his political career for good.

No longer burdened by political responsibilities, Francis Bacon devoted himself to philosophy and writing. 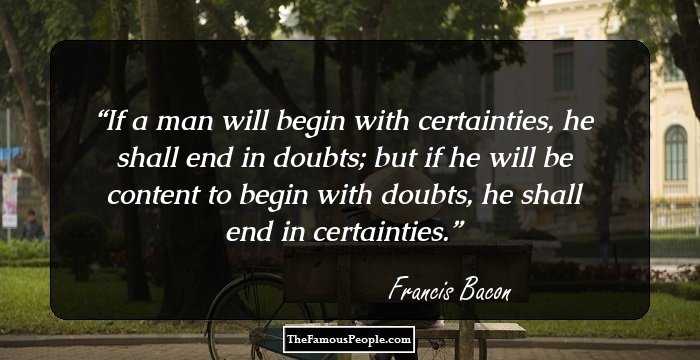 Despite being disgraced as a politician, Francis Bacon held an influential position in society as a philosopher. He published the philosophical book, The Novum Organum, in 1620. This book played a key role in the historical development of the scientific method.

In his treatise on medicine, History of Life and Death, he wrote about natural and experimental ways of prolonging life. The book also contains his thoughts on old age and the causes of the degeneration of the body. This treatise was much celebrated in his lifetime.

In his mid-30s, Francis Bacon courted a young widow named Elizabeth Hatton and proposed marriage to her. However, she rejected him to marry his political rival, Sir Edward Coke.

When he was 45, Bacon married a teenage girl named Alice Barnham, the daughter of a fellow politician. While their marriage appeared to be a happy one in the early years, Alice later started a secret love affair with Sir John Underhill.

There were speculations that Francis Bacon was primarily attracted to men. 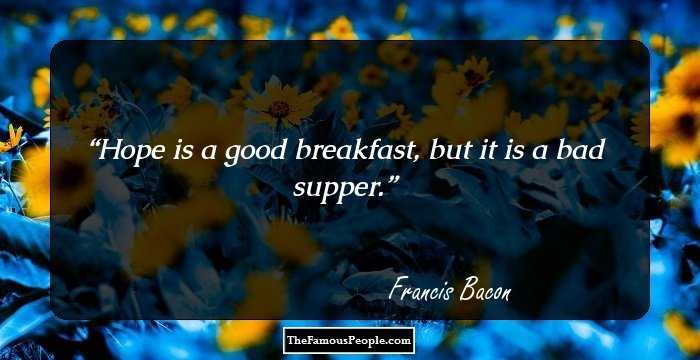 Quotes By Francis Bacon | Quote Of The Day | Top 100 Quotes

See the events in life of Francis Bacon in Chronological Order