Elizabeth I of England Biography

Born In: Palace of Placentia

Advanced Search
Elizabeth I was undisputedly one of the greatest monarchs of England who ruled the country from 1558 to 1603. Popularly known as the Virgin Queen, her 45 years of reign marked a glorious epoch in English history. Contrastingly, when Elizabeth took over as the Queen of England, the country was at its weakest self—economically bankrupt, religiously torn and politically endangered by the greater powers of France and Spain. Furthermore, her position itself was vulnerable given the fact that the world awaited her marriage and birth of her progenies to reinstate her husband/child as the actual ruler of the nation. Nevertheless, Elizabeth I had other plans. Instead of bowing down to the pressure, Elizabeth singularly ruled from the front. Her shrewd intelligence, sharp wit and headstrong determination helped her sail England through the tough times. She not just established the Church of England securing a compromise between Roman Catholicism and Protestantism, but helped England bag one of the greatest military victories against Spain by defeating the Spanish Armada. It was also during Elizabethan era that English literature flourished at its best, led by the giants William Shakespeare, Christopher Marlowe and Edmund Spenser. Overall, she was a legendary ruler who led England towards peace and stability. Image Credit
https://en.wikipedia.org/wiki/File:Elizabeth_I_Rainbow_Portrait.jpg
(The Rainbow Portrait of Queen Elizabeth I) Born In: Palace of Placentia

Henry VIII of E...
7th September In History
DID WE MISS SOMEONE?
CLICK HERE AND TELL US
WE'LL MAKE SURE
THEY'RE HERE A.S.A.P
Quick Facts

Also Known As: Elizabeth I

Quotes By Elizabeth I Of England Empresses & Queens

British People
British Women
British Empresses & Queens
Women Historical Personalities
British Historical Personalities
Childhood & Early Life
Elizabeth was born on September 7, 1533 at Greenwich Palace to King Henry VIII of England and his second wife Anne Boleyn. At a tender age, she lost her mother to execution for the latter’s inability to produce a male heir. She had a half-sister, Mary.
At the time of birth, Elizabeth was the heiress apparent to the throne of England. However, with the birth of Prince Edward to King Henry VIII’s third wife Jane Seymour, Edward became the undisputed heir.
Elizabeth was one of the best educated women of her generation. She was trained by a plethora of talented and skilful teachers. A multi-linguistic, she was proficient at French, Flemish, Italian, English, Welsh, Cornish and Scottish.
With King Henry VIII’s death in 1547, Elizabeth’s custody was taken by Catherine Parr, Henry's widow and her second husband, Thomas Seymour. Young Elizabeth was physically abused by Seymour which mentally affected her. He was later arrested and beheaded. 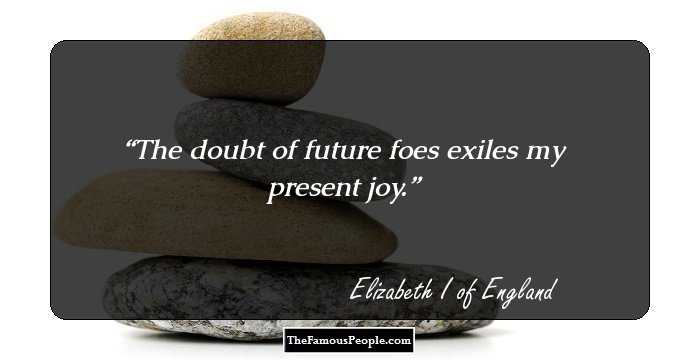 Continue Reading Below
Accession & Reign
Following King Henry VIII’s death in 1547, his son, Prince Edward VI took over as the King of England. He was merely nine. However, due to unknown circumstances, he passed away on July 6, 1553.
According to Succession to the Crown Act 1543, the death of Prince Edward VI automatically passed the throne to Mary and Elizabeth. However, due to Edward’s will, Lady Jane Grey, first cousin of Edward VI and the great-granddaughter of Henry VII through his younger daughter Mary, became the legitimate heir to the throne.
Lady Jane’s authority as the Queen of England lasted for only nine days after which she was deposed. Subsequently, Mary became the Queen of England in August 1553 with Elizabeth at her side.
Queen Mary’s rigidity toward Catholicism and non-secularist approach earned her more enemies than friends. Her fading popularity dwindled further when she proposed her plan to marry Prince Philip of Spain, the son of Emperor Charles V and an active Catholic.
Queen Mary faced the Wyatt rebellion in February 1554, following which she imprisoned Elizabeth on suspicion of the latter’s involvement. After a year of being under house arrest, Elizabeth was finally relieved.
Queen Mary’s death in November 1558 paved route for Elizabeth to succeed to the throne. On January 15, 1559, she was anointed and crowned as the Queen of England. Her appointment was widely accepted and appreciated.
Following Elizabeth’s appointment as the Queen of England, her marriage became a highly speculated concern, for she was the last of her dynasty and her marriage and children would certify the rule of Tudors. Though she received numerous proposals from Europeans suitors, she denied all.
When Queen Elizabeth ascended the throne, she inherited a number of problems stirred up by her predecessor. The foremost was the religious tension between the Catholics and Protestants. Not being a staunch religious supporter, she called for passage of the Act of Supremacy, which re-established the Church of England and Act of Uniformity.
Queen Elizabeth’s primary policy towards Scotland was to oppose the French pressure. In 1560, the Treaty of Edinburgh was signed according to which the French threat of invasion was removed from the north.
Continue Reading Below
During her reign, she faced threat from Mary Stuart, Queen of Scots who laid claim to the throne. Mary was the daughter of King James V of Scotland and married to King Francis II. In 1567, Queen Elizabeth imprisoned her cousin for having taken part in several assassination attempts. Mary was imprisoned for 20 years before being executed in 1587.
In 1585, Queen Elizabeth entered the dispute in Netherlands to support the Protestant rebellion against Spain. Same year, Sir Francis Drake undertook a voyage to the Caribbean against Spanish ports and ships. Spain which was looking forward to an invasion of southeast England under Duke of Parma through its Spanish Armada was defeated in 1588 by the English Navy.
Throughout her reign, she experienced a constant fear from Ireland, as Irish were devout Catholics and did not accept her Protestant faith. A revolt broke out in 1594, called the Nine Years’ War, under Hugh O’Neill with support from Spain. It was in 1603, that the rebels were finally defeated under Charles Blount, Lord Mountjoy and a peace treaty was signed between England and Spain.
It was under Queen Elizabeth’s reign that trade relations developed between England and Barbary States. England traded armour, ammunition, timber and metals in exchange for Moroccan sugar. She also established diplomatic relations with the Ottoman Empire so much so that Sultan Murad III proposed a military alliance between the two countries against their common enemy, Spain
The decade of 1590s witnessed the beginning of ‘second reign’ of Elizabeth. The period was marked by inflation and severe economic depression. Adding to the woes was an inexperienced new generation of rulers in the Queen’s Privy Council or governing body. Unlike the former era, factional strife within the government was dominant. Furthermore, her authority within the country diminished sharply.
Queen Elizabeth’s second reign was instrumental in producing unmatched and unrivalled literature. Prolific writers, authors and literary greats such as William Shakespeare and Christopher Marlowe came into prominence with their unsurpassed literary works. It was during her reign, fondly referred to as Elizabethan era that English theatre reached its peak. 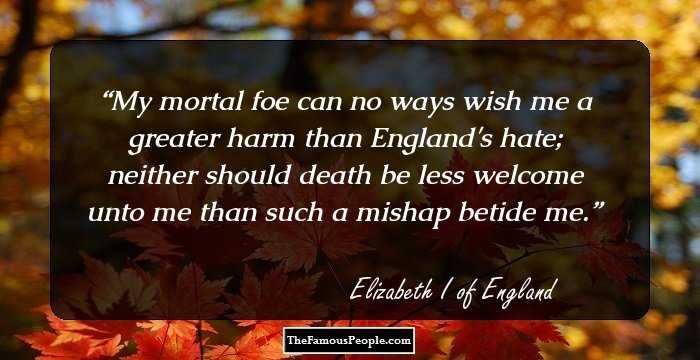 Achievements
When Elizabeth came in power, English people suffered from a major religious discord. Elizabeth chose a middle route and was relatively tolerant and moderate in her approach. She carefully manoeuvred on the religious front and secured a compromise between Roman Catholicism and Protestantism by reinstating the Church of England.
On the military front, her victory against the Spanish Armada in 1588 marked one of the greatest military victories in English history. Duke of Parma planned a Spanish invasion on the southeast coast of England through a great fleet of ships. However, the English Navy cut short their ambitious plan by defeating the Spanish Armada and dispersing them to the northeast.
Personal Life & Legacy
Queen Elizabeth’s marriage was highly contentious. Though she was bestowed with numerous proposals and even considered several suitors, her heart longed for her childhood friend Robert Dudley.
When Dudley’s wife passed away, chances of Elizabeth marrying him seemed high. However, with the nobility making their disapproval clear, she relinquished her plan.
For long, Elizabeth considered several suitors including, Philip II, King Eric XIV of Sweden, Archduke Charles of Austria, Henry Duke of Anjou and Francis, Duke of Anjou. However, she married none.
Despite repeated attempts made by the Parliamentarians to coax Queen Elizabeth to either marry or name her heir, she refused both. In 1599, she insisted that she was married to her kingdom.
In 1602, Queen went into a state of severe depression when a series of death of her friends left her emotionally disheartened. Following year, the death of Catherine Howard, niece of her cousin, came as a big blow.
In March 1603, she became severely sick. On March 24, 1603, she passed away at Richmond Palace. Her coffin was taken to the Whitehall. During her funeral, the coffin was taken to Westminster Abbey where she was interred in a tomb with her half-sister, Mary.
Following her death, her advisor Cecil and his council acted upon their plans. Elizabeth was succeeded by James VI of Scotland as James I of England. 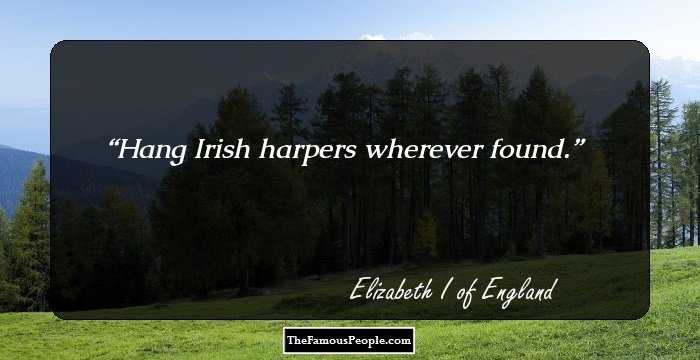