Advanced Search
Edward Everett was an American politician, pastor, diplomat, educator and orator who served as a U.S. Representative, Senator, Governor of Massachusetts, Minister to Great Britain and the US Secretary of State. He was known for his oratorical skills and was a famous speaker at the time of Civil War, instigating anti-war feelings amongst people through his moving speeches. Everett was a very studious student and did his graduation from Harvard and pursued ministry after that. He became a popular preacher while working at a post at the Brattle Street Church. He took a step forward in his career and worked as a professor of Greek literature at Harvard, which provided him with an opportunity to travel all through the Europe and learn new languages and ancient law and literature. He came back to America with an informed vision and brought European education techniques to American education system. By this time he became a well-known public orator because of which he was given an opportunity to make a career change and became a member of the U.S. House of Representatives. After that he remained active in politics for many years in various capacities like National Republican, Governor of Massachusetts, Minister to Great Britain and US Secretary of State. His speeches and knowledge of politics and literature was so profound that he also worked as a columnist for ‘New York Ledger’ for many years. Nancy Pelosi
11th April In History
DID WE MISS SOMEONE?
CLICK HERE AND TELL US
WE'LL MAKE SURE
THEY'RE HERE A.S.A.P
Quick Facts

American People
Diplomats
Educators
Theologians
Political Leaders
Childhood & Early Life
Edward Everett was born in Massachusetts to Oliver and Lucy Hill Everett. His father was a pastor of New South Church and died when Everett was eight years old. After that he went to live with his mother in Boston.
Everett went to local schools in Boston but was soon transferred to a private school of Ezekiel Webster. When he was 13, he was sent to Harvard College and after four years he graduated from there as a valedictorian. 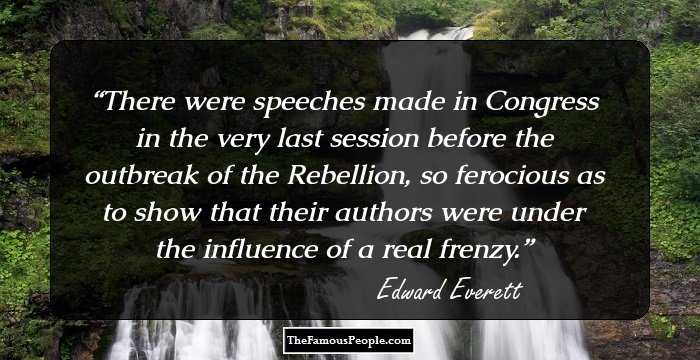 Continue Reading Below
Career
At the age of 17, Everett studied ministry under the tutelage of Havarrd President and received his MA degree in 1813. Right after, he worked at a post at the Brattle Street Church and became a popular preacher.
In 1814, he secured a position as a professor of Greek literature at Harvard under which he was authorized to travel all through the Europe and study French, German, Greek Art, Roman law, etc. there.
Everett resumed back his teaching obligations in 1819, incorporating all that he learnt from his Europe travels to the American education system. In the following year, he became the editor of the ‘North American Review’.
By 1822, he started gaining popularity as a public orator and preacher. He made a famous speech during this time regarding Greek struggle for independence.
Everett’s career path changed when he delivered a speech at Harvard on ‘Circumstances of the Favorable Progress of Literature in America’ in 1824. Impressed with the speech, he was made the candidate for the U.S. House of Representatives.
He was re-elected to four additional terms as a National Republican, which became the Whig Party in 1834. While in Congress, Everett served on the House Committee on Foreign Affairs, and on the Committee on Libraries and Public Buildings.
Everett took retirement from Congress in 1835 as he could not adjust with the way proceedings took place in the House. He instead chose to be a governor and during his tenure he made improvements in the school education system.
In 1839, he lost the election and his glorious years as the governor came to an end and the following year he was appointed as the ambassador to Great Britain under the recommendation of the Secretary of State.
His term as the ambassador to Great Britain ended in 1845, while he was being considered as President of Harvard. The following year, he accepted the post, although he was skeptical about the kind of hard work it involved.
Continue Reading Below
He served his time as the President of Harvard for three years but his job was tedious and there were not enough resources to manage the facility. Everett constantly had a problem with disruptive students.
In 1849, Everett was appointed as the Secretary of State when Daniel Webster died in the middle of his term. He was requested to return back to politics and take up the position by President Millard Fillmore.
Massachusetts Whig leaders persuaded Everett to run for the position of the US Senate while he was still serving as the Secretary of State. In 1853, he took up the position but within a year’s time he resigned from the office.
After finishing his stint with politics, Everett started writing weekly column for the ‘New York Ledger’ in 1850s and until 1860s he worked actively to raise awareness amongst people over various political issues.
He continued to deliver moving speeches on political issues even towards the end of his life. In 1863, he gave a speech at military cemetery at Gettysburg, Pennsylvania, on how the opposing sides during Civil War can reconcile. 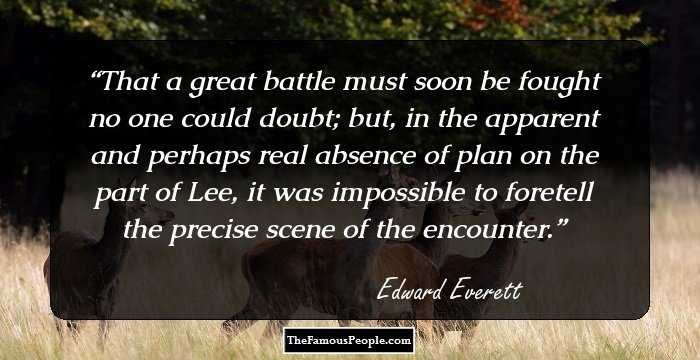 Major Works
As the Governor of Massachusetts, Everett brought major changes in society - he introduced a state board of education, authorized an extension of the railroad system, quieting of border tensions between Maine and the neighboring Canadian province, etc.
Personal Life & Legacy
Everett married Charlotte Gray Brooks in 1922. Brooks belonged to a well-to-do household and most of Everett’s political endeavors were financially supported by her family. They both had six children together.
In 1865, Everett caught cold while giving a speech in Boston, which became the reason for his death six days later and he was cremated at Mount Auburn Cemetery in Cambridge. 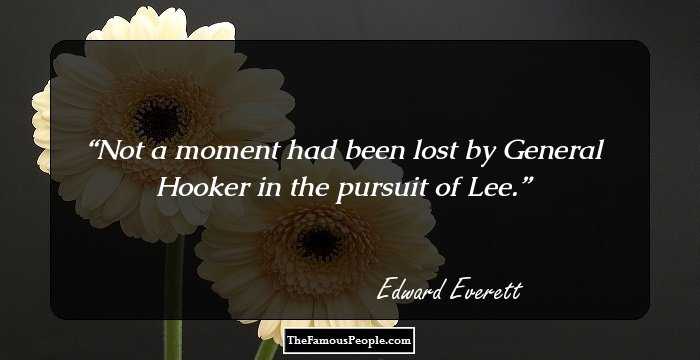 Trivia
There is a square named after Everett, near Dorchester, where he was born.
In 1860, he wrote a book called ‘The Life of George Washington’.
While working as the President of Harvard, he suffered from a number of diseases - some of them were prostrate-related because of which he had to resign from the post.
Recommended Lists:
Educators #222
Pastors #57
Miscellaneous #3700
Intellectuals & Academics #1116
Leaders #3266

Quotes By Edward Everett | Quote Of The Day | Top 100 Quotes

See the events in life of Edward Everett in Chronological Order