(Theologian Known for His Staunch Resistance to the Nazi Dictatorship)

Dietrich Bonhoeffer was a German pastor, theologian, anti-Nazi dissident, member of the Abwehr – the German military intelligence organization against Nazis and Hitler, and the founding member of the Confessing Church. From the very beginning, he was interested in Christianity and becoming a pastor even when he belonged to a family that was thoroughly into science and logic as his father was a known neurologist in Berlin. When he communicated his thoughts about taking up theology in college and becoming a pastor, he was ridiculed that he would end up living a very poor and insignificant life. Bonhoeffer decided to change this perception and started studying liberal theology. His need to understand and eventually teach the placement of Christianity in the context of a liberal world took him to America where he experienced more spiritual side of the religion than just ideological. He came back to Germany and was ordained to be a pastor but by this time the Nazi movement was at its peak and Bonhoeffer was strongly against the idea of execution of Jews or oppression of any sort. He joined the secret German military intelligence and helped people to escape from Germany which led to his arrest and ultimate execution. Bonhoeffer has given the world some wonderful theological ideas on neo-orthodox Christianity and contributed to the world of literature with the most sought-after work of his lifetime, 'The Cost of Discipleship’, which is considered as a modern classic and is a spiritual guide to set of disciplines to follow in order to receive the heavenly grace. Albertus Magnus
DID WE MISS SOMEONE?
CLICK HERE AND TELL US
WE'LL MAKE SURE
THEY'RE HERE A.S.A.P
Quick Facts

German Celebrities
Theologians
German Men
Columbia University
German Pastors
Childhood & Early Life
Dietrich Bonhoeffer was born in Breslau, Silesia Province, Prussia to Karl Bonhoeffer and Paula von Hase. His father was a neurologist and a psychiatrist who moved the family to Berlin to establish himself as a professor of neurology at University of Berlin.
He was home-schooled by his mother, until the age of 6 or 7. Young Bonhoeffer was expected to follow his father’s footsteps and become a psychiatrist but he declared as a teenager that he wanted to become a pastor. 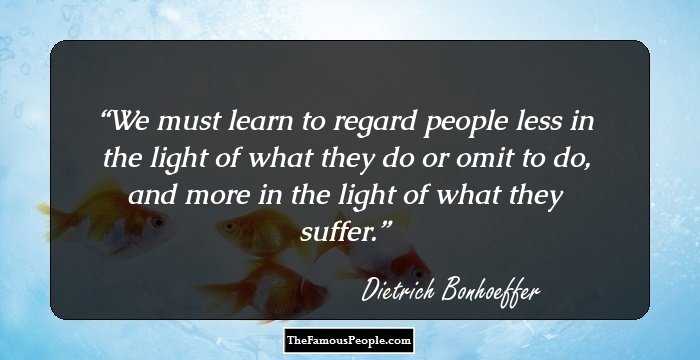 Continue Reading Below
Career
In 1924, Bonhoeffer passed matriculation at the University of Berlin, a centre of liberal theology. It was here that he was introduced to the concept of neo-orthodoxy, which was a reaction against liberal theology.
Bonhoeffer graduated summa cum laude from the University of Berlin in 1927 and became a theologist at the age of 21. His thesis, ‘Sanctorum Communio (Communion of Saints)’, was very well received in the world of Christian theology.
In order to become a pastor, Bonhoeffer started to serve as a curate in the German Lutheran parish in Spain and then returned back to the University of Berlin to write ‘Akt und Sein (Act and Being)’.
As Bonhoeffer was still very young to be ordained, he went to America in 1930 to pursue further studies. He took up a teaching fellowship at Union Theological Seminary where he had life changing experiences after interacting with the African-American spirituals.
In 1931, he came back to the University of Berlin to lecture in systematic theology, but his travels changed the way he looked at Christianity. More involved with its spiritual side now, Bonhoeffer was ordained at the St. Matthew's Church.
Bonhoeffer raised his voice against Nazi policy towards Jews and professed that the Church should oppose this and reject Hitler’s ideologies. He formed the Confessing Church - the form of church that practiced equality.
By 1934, he was disillusioned by how Confessing Church could not exhibit any power and the opposition towards Nazis was yielding no effect, therefore he moved to serve in a German speaking Protestant Church in London.
Bonhoeffer returned to Berlin in 1935 as he felt that his country needed his servicest, even though the chances of a change were bleak. Within a year, Bonhoeffer was declared as the enemy of state.
The Confessing Church seminary was closed down as the Nazi control over church and Germany in general intensified in 1937. This led to Bonhoeffer travelling throughout Eastern Germany in order to organize underground seminars to sympathetic students.
Continue Reading Below
This was the time when he wrote on the theological subjects that were close to his heart and published ‘The Cost of Discipleship’, in which he talks about inculcating greater spiritual discipline to achieve the grace.
In 1939, worried about being asked to take an oath under Hitler or be arrested, he left Germany to live in America but in two years time he returned back as he felt guilty for leaving his countrymen alone in the times of struggle.
By 1941, Bonhoeffer was forbidden to speak in public or print or publish anything; therefore he joined the Abwehr, a German military intelligence organization, and served as a messenger for the small German resistance movement.
Bonhoeffer was arrested as he was involved in helping some German Jews escape to neutral Switzerland in 1943 and he was imprisoned at Tegel Military prison for a year and a half. He continued to write in the jail.
In 1945, Bonhoeffer’s court martial took place and he was sentenced to death by hanging by wire so as to prolong the death. He was hung along with other conspirators like, Admiral Wilhelm Canaris and Hans Oster. 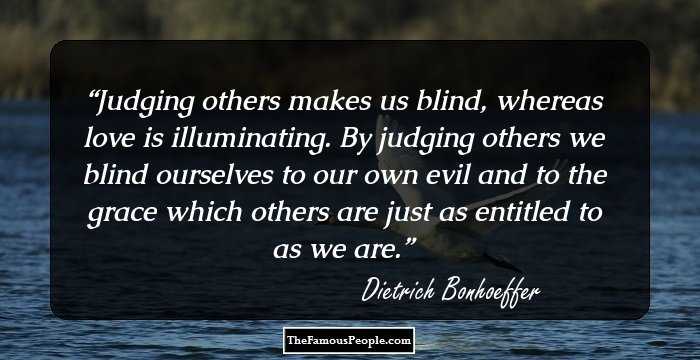 Quotes: Love
Major Work
The most important work of Bonhoeffer’s life is considered to be ‘The Cost of Discipleship’ which was written in 1937. It presented his thoughts on the neo-radical practices of Christianity in the background of the Nazi invasion of Germany.
Trivia
This German pastor is said to be involved in the assassination plans of Hitler.
He ran up a high telephone bill to maintain his contact with the Confessing Church he founded in Germany, from England. 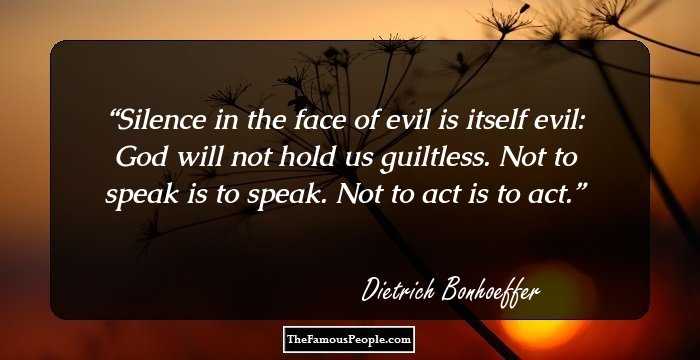 Quotes By Dietrich Bonhoeffer | Quote Of The Day | Top 100 Quotes

See the events in life of Dietrich Bonhoeffer in Chronological Order