Martin Luther was a German priest who was a major figure in the Protestant Reformation. A professor of theology and a former monk, he is credited to have started the Protestant Reformation in 16th-century Europe which changed the course of Western civilization. He not only rejected several teachings and practices of the Late Medieval Catholic Church, but also vehemently opposed the strong belief that freedom from God's punishment for sin could be purchased with money. Born into a Catholic family, he was interested in theology and philosophy from a young age. Once as a young man he was almost struck by lightning during a thunderstorm. Terrified, he vowed to God that he would become a monk if he escaped alive. Thus he embarked on a life dedicated to religion and earned a Doctor of Theology degree. Initially a follower of Catholicism, he eventually recanted several of his beliefs and proceeded to reformulate some basic tenets of Christian belief that resulted in the division of Western Christendom into two factions: Roman Catholicism and the newly formed Protestant traditions. Pope Leo X and the Holy Roman Emperor Charles V were angered by Luther’s actions and asked him to retract all his wittings. He refused to do so and was excommunicated by the pope.
Continue Reading Below Cause of Death: Apoplectic Stroke

German People
Priests
Theologians
Spiritual & Religious Leaders
German Men
Childhood & Early Life
Martin Luther was born to Hans and Margarette Luther on 10 November 1483 in Eisleben, Saxony, then part of the Holy Roman Empire. He was baptized as a Catholic. His father was a leaseholder of copper mines and smelters, while his mother was a hard-working woman. He had several siblings and was closest to his brother Jacob.
His father harbored great ambitions for Martin and wanted him to become a lawyer. He ensured that the young boy received a good education and sent him to a Latin school in Mansfeld in 1488.
Martin received a thorough training in the Latin language and also learned Ten Commandments, the Lord’s Prayer, the Apostles’ Creed, and morning and evening prayers.
He moved to a school operated by the Brethren of the Common Life, a lay monastic order, in 1497. Then he enrolled at the University of Erfurt, one of the most distinguished universities in Germany at that time.
He received a baccalaureate degree in the liberal arts in 1502, and a master’s degree three years later. He was deeply influenced by the works of Aristotle and William of Ockham during his student days.
His father wanted him to become a lawyer but Martin Luther was now growing more interested in religion. An incident that happened in 1505 changed the course of his life. He was returning to the university on horseback one day when he was caught in a thunderstorm. Suddenly a lightning bolt struck near him, and terrified for his life, he prayed to Saint Anna and vowed to become a monk.
As promised, he left the university, sold off his books, and entered an Augustinian cloister in Erfurt. This step greatly infuriated his father. 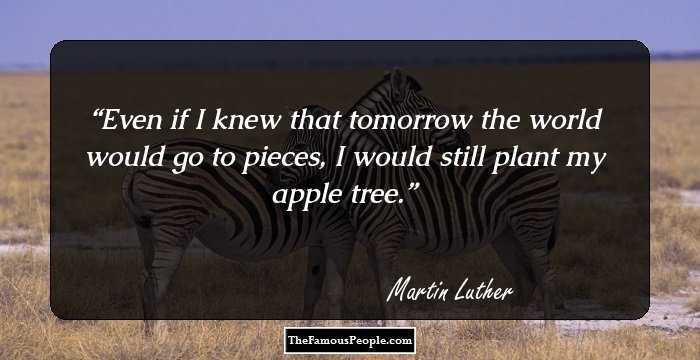 Famous Beautiful Women With Green Eyes
Later Life
Having decided to dedicate his life to religion, he began the study of theology at the University of Erfurt in 1507; he was ordained to priesthood the same year.
He shifted to the Augustinian monastery at Wittenberg the next year, and received a bachelor's degree in Biblical studies in 1508, and another bachelor's degree in the Sentences by Peter Lombard in 1509.
He furthered his religious studies to earn his Doctor of Theology in 1512. He soon joined the theological faculty of the University of Wittenberg where he would spend the rest of his career.
In 1517, Pope Leo X announced a new round of indulgences to help build St. Peter’s Basilica. This move greatly angered Luther who was convinced that the church was corrupt in its ways.
He wrote ‘The 95 Theses’, in retaliation in which he severely criticized certain beliefs of the Catholic Church and called for reforms. He then nailed the text on the university’s chapel door and also shared copies with his like-minded friends for distribution to the masses.
’The 95 Theses’ was widely circulated throughout Germany and Europe, reaching France, England, and Italy, thus heralding the beginning of the Protestant Reformation.
Archbishop Albrecht of Mainz and Magdeburg was infuriated with Luther’s ‘The 95 Theses’ and his stance against the indulgences as the Archbishop himself needed the revenue from the indulgences to pay off a papal dispensation. Thus he had the theses checked for heresy and forwarded it to Rome.
On receiving the theses, Pope Leo X deployed a series of papal theologians and envoys against Luther. But this did not deter Luther from speaking his mind; in fact, this only strengthened his anti-papal theology. Now he even stated that the Bible did not give the pope the exclusive right to interpret scripture, and questioned the papal authority.
The pope grew increasingly frustrated with Luther and sent him a letter in 1520, threatening Luther with excommunication unless he recanted 41 sentences drawn from his writings, including the 95 Theses, within 60 days. Luther burned the letter publicly, adding to the pope’s annoyance.
Continue Reading Below
As a result, the pope excommunicated Luther in January 1521, in the bull Decet Romanum Pontificem. Luther was now ordered to appear before the Diet of Worms, a general assembly of the estates of the Holy Roman Empire that took place in Worms.
Luther appeared as ordered before the Diet of Worms in 1521. Emperor Charles V commenced the Imperial Diet where Luther was presented with copies of his writings and asked if he stood by their contents. He refused to recant his writings and was thus declared a heretic, an outlaw.
Luther faced the risk of arrest and was helped by his friends in making good his escape. He settled in Wartburg Castle at Eisenach where he continued his works. He translated the New Testament from Greek into German and authored the essays ‘On Confession, Whether the Pope has the Power to Require It’ and ‘The Judgement of Martin Luther on Monastic Vows’.
During his later years he organized a new church, Lutheranism, and gained many followers. In 1533, he began serving as the dean of theology at University of Wittenberg, a post he held until his death. 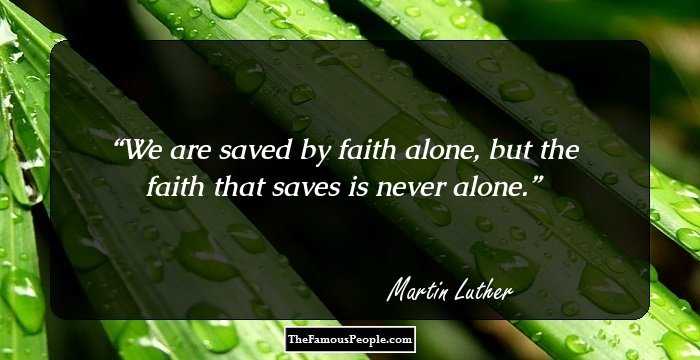 Quotes: Never, Alone
Major Works
Martin Luther is credited to have sparked the Protestant Reformation which began as an attempt to reform the Roman Catholic Church. He challenged the authority of the papacy, and attempted to reform certain Christian doctrines through his writings. In addition, his hymns inspired the development of congregational singing within Christianity.
He translated the Bible from Hebrew and ancient Greek to German language which made the Scriptures more accessible to the common man, leading to a tremendous impact on the church and on German culture. His translations not only helped in popularizing Christianity, but also aided the development of a standard version of the German language.
He authored ‘The 95 Theses’ which is widely regarded as the initial catalyst for the Protestant Reformation. The theses question the Catholic Church's practice of selling indulgences and protest clerical abuses, especially nepotism, simony, usury, and pluralism.
Personal Life & Legacy
He married Katharina von Bora, one of the nuns he had helped escape from the Nimbschen Cistercian convent. He was 41 years old at that time and his decision to marry came as a surprise to many. The couple’s marriage set a model for the practice of clerical marriage within Protestantism. They had a happy marriage that resulted in the birth of six children.
He suffered from ill health during his later years, plagued by several ailments like kidney stones, arthritis, heart problems and digestive disorders. He died on February 18, 1546, at age 62.
Martin Luther is considered both an influential and a controversial figure in the Reformation movement. He is honored on 18 February with a commemoration in the Lutheran Calendar of Saints and in the Episcopal (United States) Calendar of Saints. 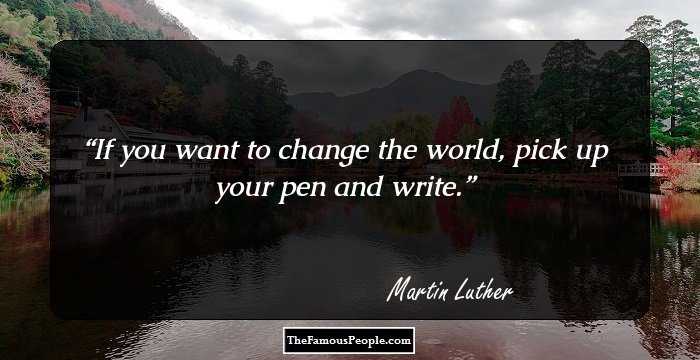 Quotes By Martin Luther | Quote Of The Day | Top 100 Quotes

See the events in life of Martin Luther in Chronological Order