(Political Philosopher Who Gave the Doctrine of 'Separation of Powers')

Baron de Montesquieu was a French author, political commentator, philosopher, jurist and social commentator. He is widely regarded as one of the greatest philosophers of the late 17th and 18th centuries, whose political ideologies have influenced people all over the world. One of his most important works ‘The Spirit of the Laws' inspired the shaping of the U.S constitution and the English government. His theory on the ‘separation of powers’ has influenced the formulation of many constitutions across the world. He was one of the first scholars to emerge during the Age of Enlightenment, a cultural movement in the 18th century that stressed on reasoning. Some of his other publications include, ‘Persian Letters', ‘Defense de L’Esprit des Lois ', ‘Dialogue de Sylla et d'Eucrate', 'Le Temple de Gnide ' and 'Reflexionssur la MonarchieUniverselle'. He has influenced a wide range of people including Scottish philosopher, David Hume, English-American political activist, Thomas Paine, French political thinker, Alexis de Tocqueville and political theorist Hannah Arendt, among many others. He encouraged political freedom of thought and expression. Michel Foucault
DID WE MISS SOMEONE?
CLICK HERE AND TELL US
WE'LL MAKE SURE
THEY'RE HERE A.S.A.P
Quick Facts

French People
French Men
Male Philosophers
French Philosophers
French Intellectuals & Academics
Childhood & Early Life
Baron de Montesquieu was born in Aquitaine, France into a well to do family. His father Jacques de Secondat had a long noble ancestry and was a soldier. His mother, Marie Fran�oise de Pesnel died when he was seven.
He studied at the Catholic College of Juilly, a well-known school for Children belonging to the French nobility. After his father died in 1713, he went under the care of his uncle Baron de Montesquieu.
He studied literature, sciences and received classical education. He later went to attend the University of Bordeaux, where he pursued his studies in law. After his graduation, he worked in Paris.
After the death of his uncle, Baron, he became the heir to the latter’s fortune and earned his legal title as well. He was also bestowed with the office of President � Mortier in the Bordeaux Parliament. 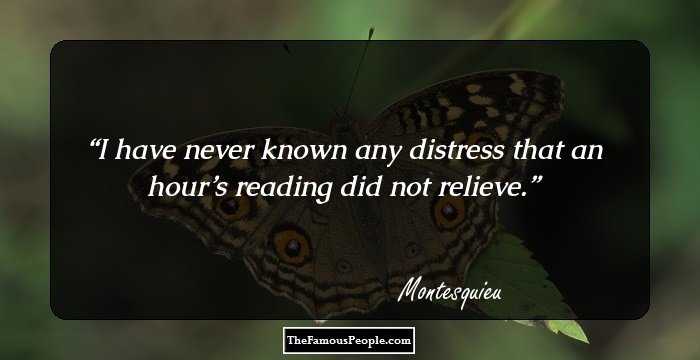 Quotes: Never, I
Continue Reading Below
Career
In 1714, he was appointed as a councillor in the Bordeaux Parliament. He later went on to become the deputy president of the Bordeaux Parliament. By this time he had established a social status for himself and was a wealthy man.
In 1721, he came out with his book titled, ‘Persian Letters', which was a political satire and social satire in the French context. The book earned him immense critical acclaim.
While he was in Paris, he represented the Parliament and the Academy of Bordeaux. During this phase of his life, he went on to publish some of his minor works.
In 1724, he published his work titled, ‘Dialogue de Sylla et d'Eucrate' and 'Reflexionssur la MonarchieUniverselle ' The following year, he came out with 'Le Temple de Gnide '.
By 1725, he had lost interest in his political career and life in the Parliament. The same year, he resigned from the Parliament and left France to travel out of the country.
He travelled to various parts of Germany, Italy and Austria and later went to England, where he spent the next two years. During his stay in England, he was very impressed with the political system there.
In 1731, he came back to France from England and began to work on the manuscript of his political book, ‘The Spirit of the Laws', for which he drew inspiration from the English political system, which he observed while in England.
In 1734, he published his work titled, ‘Considerations on the Causes of the Grandeur and Decadence of the Romans'. This work is believed to have been published anonymously in Holland.
In 1748, his book on political theory titled, ‘The Spirit of the Laws' was published in France. This book was published anonymously due to certain censorship issues on his work.
Continue Reading Below
In 1750, he came out with his work titled, ‘D�fense de L’Esprit des Lois ', which was a defence written with reference to his previously published work, ‘The Spirit of the Laws'.
In the 1751, his book, ‘The Spirit of the Laws' created controversy after the Roman Catholic Church included it in the ‘Index of Forbidden Books’.
Before he died, he left behind an unfinished draft of his work ‘Encyclopedie of Diderot and D'Alembert’. 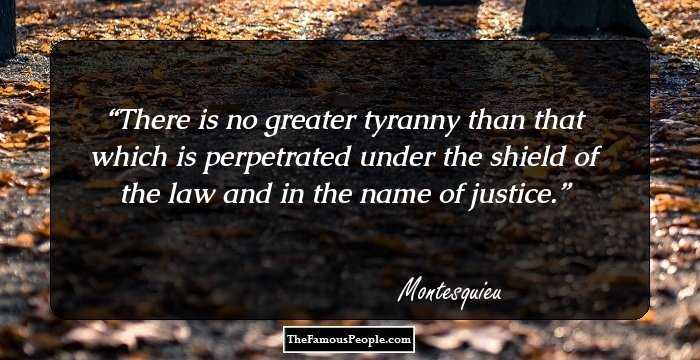 Major Works
His book, ‘The Spirit of the Laws' is regarded as one his most influential, ground-breaking works in the genre of political theory. This book had influenced the U.S constitution.
Personal Life & Legacy
In 1715, he married Jeanne de Lartigue. The couple had three children together.
He died at the age of 66 due to severe fever in Paris.
A collection of his notebook entries from 1720 until his death in 1755 was published in a book form titled, ‘Mes Pensees’, translated as ‘My Thoughts’ in English. The English version was translated by Henry C. Clark. 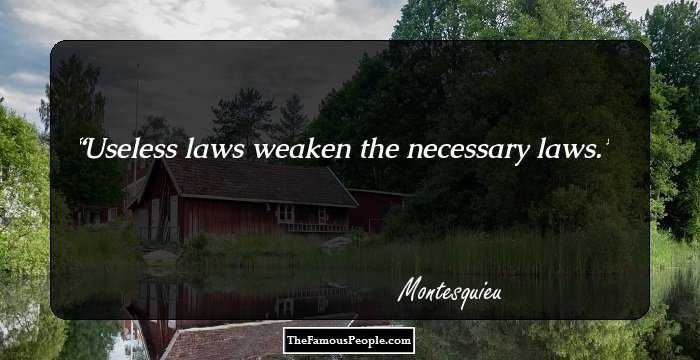 Quotes By Montesquieu | Quote Of The Day | Top 100 Quotes

See the events in life of Montesquieu in Chronological Order