(French Philosopher and Founder of Sociology and Positivism )

Advanced Search
Auguste Comte or Isidore Auguste Marie François Xavier Comte was a prominent French philosopher. He introduced a new discipline, 'Sociology,' and divided this subject in two categories - “social statics,” which denotes the forces holding society together and “social dynamics”, which indicates the forces responsible for social change. He, for the first time, proposed the idea of positivism, a philosophy of science that gained wide recognition in the second half of the nineteenth century. Most of his work reflect the influence of the utopian socialist Henri Saint-Simon. He endeavoured to cure the social maladies of the 'French Revolution' with the help of his newly developed positive philosophy. His law of three stages is an attempt to describe the historical sequence of human mind in three steps - theological, metaphysical, and positive. Due to his development of specific philosophy for each discipline of science - mathematics, physics, chemistry and biology - he is regarded as the first philosopher of science in the modern sense. In an article written for “Le Censeur Europeen,” a journal of the liberal opposition of that era, he put his view against equal access to jobs in government sector. Apart from enriching the field of Sociology, his social theories provided the basis for the formation of “Religion of Humanity.” Roland Barthes
DID WE MISS SOMEONE?
CLICK HERE AND TELL US
WE'LL MAKE SURE
THEY'RE HERE A.S.A.P
Quick Facts

discoveries/inventions: Discipline Of Sociology And Of The Doctrine Of Positivism

French People
French Men
École Polytechnique
Male Philosophers
French Philosophers
Childhood & Early Life
Born in Montpellier, Herault, in southern France, Auguste Comte was the son of Louis and Rosalie Comte. He studied at the Lycee Joffre and later attended the 'University of Montpellier.'
With the beginning of the 'French Revolution,' the idea of republicanism had a great influence on him. He enrolled at the 'Ecole Polytechnique' in 1814. When the Ecole closed for reorganization in 1816, he pursued his study at the medical school at Montpellier.
Without finishing his graduation, he settled in Paris, where he made living by teaching mathematics and journalism. Simultaneously, he also studied economics, history, and philosophy. In 1817, he met social theorist Henri de Saint-Simon and became his secretary and collaborator but owing to a dispute of the authorship of their writings, this partnership ended in 1824. 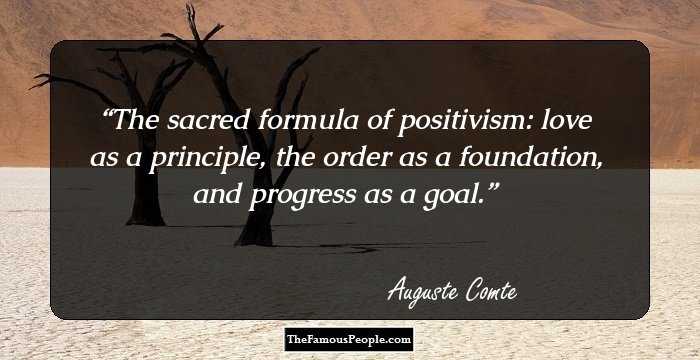 Quotes: Love
Continue Reading Below
Career
In April 1826, he started delivering lectures as part of a course of positive philosophy and his audience included well-known scientists, such as Fourier and Poinsot. On account of his poor health, he had to miss the course and could resume this only in 1829. Later, he published six volumes of this course titled, “Course of Positive Philosophy,” from 1830 to 1842.
Starting 1832, he taught analysis and mechanics at the 'Ecole Polytechnique,' but he lost this job in 1842 due to a clash with the administrators of the institute. In the following year, he published his book on mathematics titled “Elementary Treatise on Analytic Geometry.”
Besides finishing work on his books, “Philosophical Treatise on Popular Astronomy” and “Discourse on the Positive Spirit,” in 1844, he was busy in writing the “System of Positive Polity.”
Taking inspiration from the 'Club of the Jacobians,' Comte set up the 'Positive Society.' His book “General View of Positivism,” too, released almost at the same time.
From 1851 to 1854, he worked on the four volumes of “System of Positive Polity." For a few months in 1852, he was also busy with “Catechism of Positive Religion.”
After publishing “Appeal to Conservatives” in 1855, he published the first volume of “Subjective Synthesis” or “Universal System of the Conceptions Adapted to the Normal State of Humanity,” his book on the philosophy of mathematics. 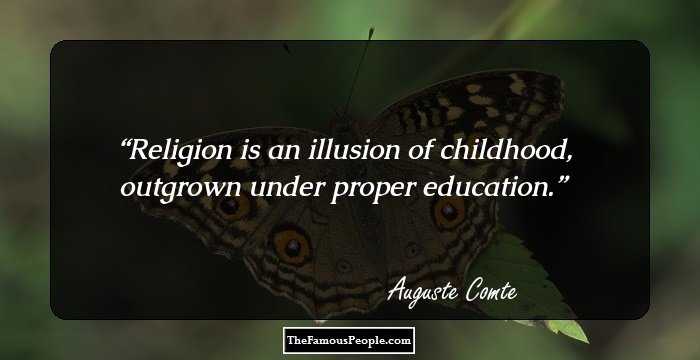 Major Works
He published six volumes of “Course in Positive Philosophy” between 1830 and 1842. In this series, he presented an interesting review of mathematics, astronomy, physics, chemistry, and biology. He also showed the historical and theoretical link among them.
From 1851 to 1854, he published four volumes of “System of Positive Polity - A Treatise of Sociology, Instituting the Religion of Humanity.” Through this work, he expressed his unique view on democracy.
Personal Life & Legacy
He married his partner Caroline Massin in 1824. They did not lead a happy married life on account of financial problems; he divorced his wife in 1842. From 1844, he developed a platonic relationship with Clotilde de Vaux.
He passed away due to stomach cancer. He was buried in the Pere Lachaise Cemetry, Paris. His apartment, where he lived from 1841 to 1857, has been preserved as the 'Maison d’Auguste Comte,' which is a private museum.
His work had a great influence on renowned social thinkers like Karl Marx, John Stuart Mill, and George Eliot. His concept of 'social evolutionism' acted as a great inspiration for the development of modern academic sociology. 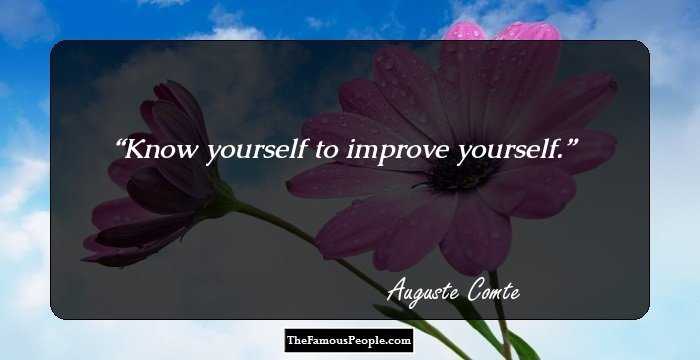 Trivia
This widely acknowledged philosopher was admitted to a mental health hospital in 1826, but left without being cured. He attempted suicide the following year.

Quotes By Auguste Comte | Quote Of The Day | Top 100 Quotes

See the events in life of Auguste Comte in Chronological Order