Roland Barthes is a legendary figure and semiotician, whose ideas encouraged the advancement of a number of fields including structuralism, anthropology, post-structuralism, semiotics and social theory. He was highly influenced by Ferdinand de Saussure’s semiology throughout his life and thus, began to develop his own complex theoretical concepts that became central to a number of schools of thought in France and Europe. He was also a leading critic of his time and a prominent theoretical personality across Europe and America. Interestingly, he left an indelible impression wherever he went and making himself known in popular culture as well. Some of his well-known works included, ‘Writing Degree Zero’, ‘Mythologies’, ‘Criticism and Truth’, ‘The Pleasure of the Text’ and ‘Image Music Text’. Most of his works carried with them a multiplicity, applying semiotic theory and literary critique. He was often potholed against more traditional French scholars, but never minding their thoughts, he managed to make important advances in a number of areas. During his time, he was considered a living legend and a leading critic of his generation. His works secured a number of translations since his untimely death in an accident at the age of sixty-four. Georges Bataille
DID WE MISS SOMEONE?
CLICK HERE AND TELL US
WE'LL MAKE SURE
THEY'RE HERE A.S.A.P
Quick Facts

French Celebrities
Philosophers
Literary Critics
French Men
University Of Paris
Childhood & Early Life
Roland Gerard Barthes was born on November 12, 1915 to Louis Barthes, a naval officer and Henriette Barthes, in Cherbourg, Normandy.
After the death of his father in a battle, he was raised by his mother, aunt and grandmother in Urt, a village and in Bayonne. When he turned 11, the family moved to Paris.
Through most part of his early life, he was beleaguered by tuberculosis and writhed from repeated physical breakdowns that affected a large part of his career.
His illnesses kept him away from education and also became the main reason for him to be out of military service during World War II.
From 1935 to 1939, he spent his time at the Sorbonne, where he earned a certificate in classical letters and philology. He published a number of papers, struggling with his health at the same time. 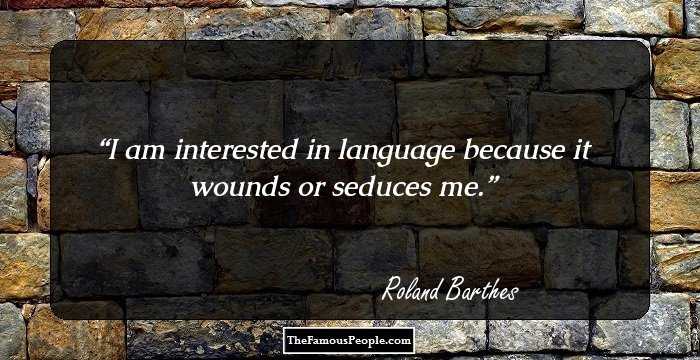 Quotes: Me, I
Continue Reading Below
Career
In 1948, he returned to purely academic work, being offered a number of short-term jobs in institutes in Romania, Egypt and France. During this time, he wrote his first work for the Paris publication, ‘Combat’, which became the basis for his first-full length work.
In 1952, he studied lexicology and sociology and settled at the ‘Centre National de la Recherche Scientifique’. His first full-length work, ‘Writing Degree Zero’ was published the subsequent year.
During his seven year tenure with the institute, he began writing a number of essays for the magazine ‘Les Lettres Nouvelles’, in which he undid myths of popular culture. His essays were later compiled in a novel that was titled, ‘Mythologies’, in 1957.
In the 1960s, he spent most of time studying semiology and structuralism, as well as chairing a number of faculty positions in Europe.
His views led to an aggressive tete-a-tete with Raymond Picard, a professor of literature, who despised Barthes’ views. He came back with a confutation in his book, ‘Criticism and Truth’, which was published in 1966.
In the latter half of the 1960s, he travelled around the world and also wrote one of his best-known works at this time—an essay titled, ‘The Death of the Author’, in 1967.
During this period, he continued to contribute essays to the modern literary magazine, ‘Tel Quel’ and also began developing theoretical ideas. One of his most phenomenal works titled ‘S/Z’ was published in 1970. The next year, he served as a visiting faculty for the University of Geneva.
In 1975, he wrote an autobiography titled ‘Roland Barthes’ and two years later, he chaired the ‘Semiologie Litteraire’ at the College de France. The same year, his mother passed away— this was a severe blow to the theorist’s life and works. Two years later, he published ‘A Lover’s Discourse’.
In 1980, he published his last works, ‘Camera Lucida’, which was mainly an examination into the nature and crux of photography.
Continue Reading Below
One of his lesser-known works, ‘Travels in China’, was published posthumously, in 2012. 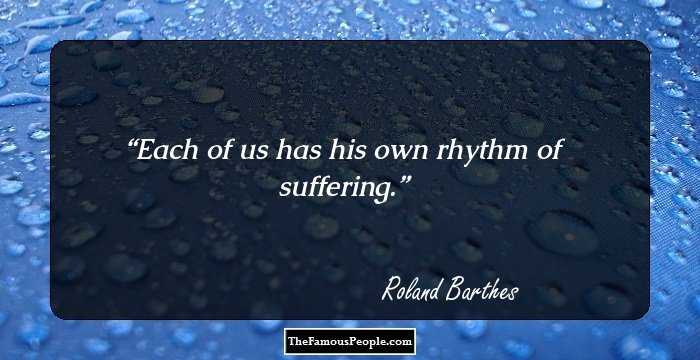 Major Works
‘Writing Degree Zero’ was his first book, first published in 1953. Largely considered one of his magnum opuses, this book compiled a number of short essays and also taught readers about the dissimilarity between language and writing. The original version was written in French and was translated to English in 1967 by Jonathan Cape. It has also been ranked at the no. 63 position on Le Monde’s list of ‘100 Books of the Century’.
‘S/Z’ published in 1970 is one of his most important works and offers a structuralist analysis of ‘Sarrasine’. The book is believed to have had a major impact in literary criticism and is considered a masterpiece that helped develop structuralism and post-structuralism ideologies.
Personal Life & Legacy
He maintained a diary—some of the excerpts of which were published posthumously titled, ‘Soirees de Paris’ and ‘Light of the Sud Ouest’, which threw light on his earlier erotic encounters with boys and during his stay in Paris.
He shared an extremely close bond with his mother, whom he lived with for 60 years of his life. After her demise, he was shattered and grieved his mother’s death till the time of his death.
He was extremely interested in photography and believed that photographs presented a real representation of the world, an explanation of which was given in his works, ‘Camera Lucida’.
He was hit by a laundry van in Paris on February 25, 1980 and died a month later, succumbing to the injuries he sustained during the accident.
His legacy is an extensive one. Most of Barthes’ works gave rise to structuralism, semiotics and post-structuralism schools of thoughts. Apart from these broad genres, his influence can be felt in every field concerned with the exemplification of material and prototypes of communiqué including photography, literature, music and computers. 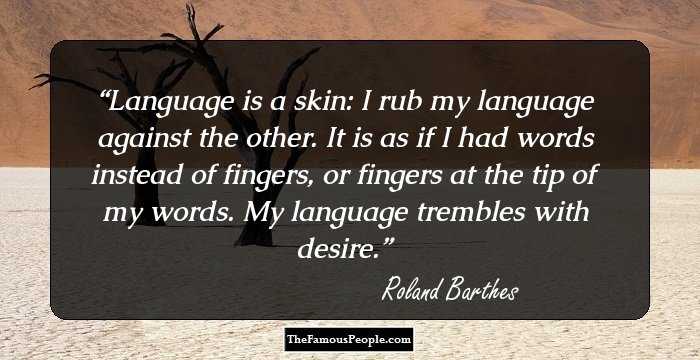 Quotes By Roland Barthes | Quote Of The Day | Top 100 Quotes

See the events in life of Roland Barthes in Chronological Order