Born In: British Mandate of Palestine

Ariel Sharon was an Israeli general and politician who later on served as the eleventh Prime Minister of Israel; he was in the office from March 2001 to April 2006. Growing up in a hostile world, in the midst of the Israel-Arab conflict, Ariel became aware of the need for self-defense early in his life and joined Gadna at the age of fourteen. At the age of seventeen, he joined Haganah and contributed significantly to his country’s war of independence. Later as the Israel Defense Forces was formed, he started his career as a platoon commander in Alexandroni Brigade and was quickly promoted to the post of company commander of the Golani Brigade, achieving many victories before he retired as a Major General. Although some of his campaigns were highly controversial his strategies were mostly successful. Post retirement, he entered politics and served in many important positions before he became the Prime Minister of the country. The Israeli Disengagement from Gaza, which started the Arab-Israel peace process, is perhaps his most significant achievement as the country’s Prime Minister. Born In: British Mandate of Palestine

Israeli Celebrities
Military Leaders
Political Leaders
Israeli Men
Male Leaders
Childhood & Early Life
Ariel Sharon was born as Ariel Scheinerman on February 26, 1928 at Kfar Malal, a Jewish Settlement located within the then British Mandate of Palestine, now part of Israel. His father, Shmuel Scheinerman, was originally from Brest-Litovsk while his mother, Dvora, was from Mogilev, both located in present day Belarus.
His parents met while they were studying at the university in Tiflis, then a part of Russia. To escape the growing persecution of Jews by the Communist regime, they emigrated to Kfar Malal with the Third Aliyah, as the third wave of Zionist immigration from Eastern Europe to Palestine is called.
Ariel was the younger of his parents’ two children, having an elder sister called Yehudit or Dita. As a child, he was proficient in both Hebrew and Russian.
In around 1933, when Ariel was five years old, the family was ostracized for taking independent stand in many important issues. Among other measures, they were expelled from the local synagogue, which helped him to grow up in a comparative secular environment.
Even as a young boy he became aware of the fact that they were not really safe in the politically turbulent environment, and had to be prepared to defend themselves. In 1938, as he turned ten, Ariel joined HaNoar HaOved VeHaLomed, a Labor Zionist movement for the young.
Then in 1942, he joined Gdudei No'ar (Gadna), an organization established for providing preliminary military training to young boys. Sometime now, he also started taking part in armed night patrols.
Thereafter in 1945, he joined Haganah, an underground Jewish paramilitary organization in the British Mandate of Palestine. Very soon he started taking part in active combat. Till then he used his original surname, Scheinerman. 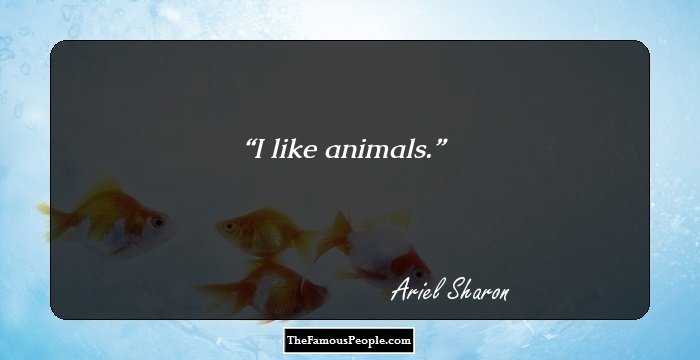 The Sexiest Men Of 2020, Ranked
Becoming Ariel Sharon
From the autumn of 1947, his unit, consisting of thirty men, started making hit-and-run raids on Arab forces around Kfar Malal. They also hit Arab villages and bases, destroying roads and ambushing traffic. Very soon, they were able to build up the strength required for more such operations.
Thereafter, the ambushes and raids closely followed one another and for his roles in these raids, Ariel was made a platoon commander in the Alexandroni Brigade sometime in 1948. By now he had become an aggressive soldier.
Later in the same year, his platoon took part in the First Battle of Latrun. During the course of the war he was shot in the groin, stomach, and foot. Although some sources claim that he was taken a prisoner and traded, he had never admitted that.
Nonetheless, he quickly recovered from his wounds and returned to take charge of his platoon. Sometime during the end of the year 1948, David Ben-Gurion, the founding father of the state of Israel, Hebraized his name into Sharon. From that point, he began to be known as Ariel Sharon. 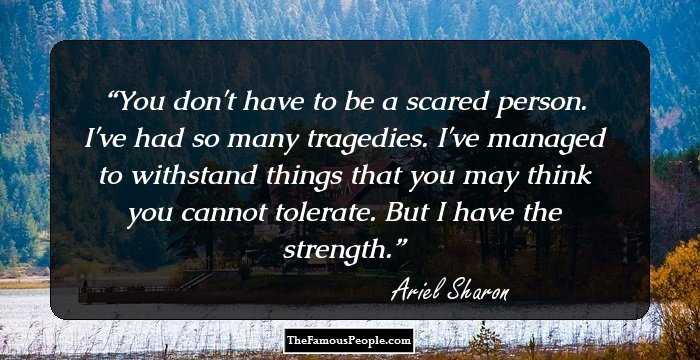 Quotes: Think
Early Military Career
In September 1949, Sharon was promoted to the post of company commander of the Golani Brigade's reconnaissance unit. A few months later in early 1950, he became an intelligence officer for Central Command. One of his final operations during this period was the Operation Bin Nun Alef into Jordan.
In 1952, he took leave of absence to study history and Middle Eastern culture at the Hebrew University of Jerusalem. In the following year, he was recalled to establish a special task force capable of responding to the Palestinian fedayeen attacks. Some time now, he was also promoted to the post of Major.
In August 1953, the Commando Unit 101 was created with Major Sharon as its Commander. They undertook several raids in the West Bank, then held by Jordan. Such raids for the first time warned their enemies that Israel is capable of hitting back.
In October 1953, his troops attacked Qibya, a village located in the West Bank and used as a base by the Palestinian fedayeens. This was in retaliation of the Yehud attack, which killed an Israeli woman and her two children while they were sleeping in their home on October 12, 1953.
Continue Reading Below
In response, Sharon’s troops dynamited forty-five civilian houses, a school and a mosque in Qibya. At least 65 Palestinian civilians, half of them women and children, were also killed. The incident, known as Qibya Massacre, drew international condemnation and Israel government denied that Israel army was involved in the incident.
In 1954, Unit 101 was merged with the 890 Paratroopers Battalion to create the Paratroopers Brigade. As its Commander, Sharon continued raiding into Arab territory; Operation Black Arrow, Operation Elkayam, Operation Egged, Operation Olive Leave, Operation Volcano, Operation Gulliver and Operation Lulav being some of the major raids commanded by him.
In late 1956, his paratroopers’ brigade was assigned to the Sinai Campaign, also known as the Suez Crisis with him as the Commander. During the campaign his brigade came under heavy firing and suffered heavy loss at the Mitla pass.
To save many of his men, he took unauthorized actions, which was later condemned by many in the military as insubordination. It hindered his progress in the army.
In 1957, he was sent to Staff College in Camberley, England, for officer training. On his return in 1958, Sharon was promoted to the post of colonel. Subsequently, he spent the next three years as senior administrative officer in the training division of the General Staff, heading the Infantry School.
Rising up the Ranks
In 1962, Ariel Sharon became brigade commander of the armored corps. Two years later in 1964, as Yitzhak Rabin became the Chief of Staff, he made Sharon the Chief of Staff at Northern Command headquarters.
Subsequently in 1966, he was made head of training division of the General Staff. In the same year, he received his degree in law from the University of Tel Aviv.
Thereafter in early 1967, he was promoted to the post of major-general or Aluf. Before the onset of the Six-Day-War on 5 June, Sharon, then the Commander of an armored division, was asked to defend the Sinai front.
Instead, he went offensive with a complex plan, involving infantry, tanks and paratrooper; winning the Battle of Abu-Ageila and occupying most of the Sinai area. Military researchers in USA and other countries found his strategies to be unique and he received international commendation for the operation.
Continue Reading Below
In 1969, during the War of Attrition, Sharon was appointed the Head of IDF's Southern Command. As its leader, he had many decisive victories including the destruction of the fortress at the Green Island, which was used by the Egyptians to control the airspace of the whole sector.
In August 1973, Ariel Sharon retired from the army. But as the Yom Kippur War started on October 6, 1973, Sharon was recalled to active duty. He was now assigned to the reserve armored division and moving under the cover of darkness, his force crossed the Suez; thus effectively winning the war.
He then encircled the Egyptian Third Army, cutting off their supply line. Although it created some internal problems with Major General Avraham Adan, whose division was fighting in the same field, his actions were later found to be militarily effective and he was hailed as a hero. 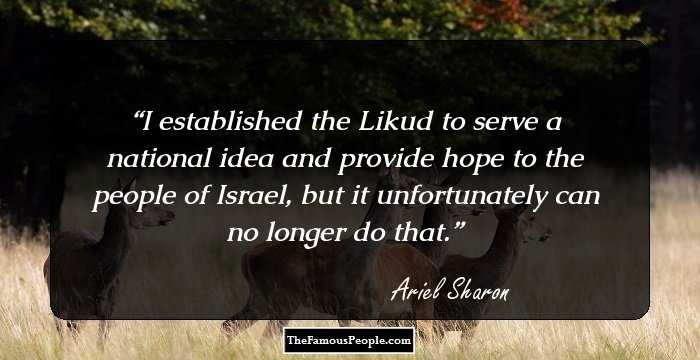 Quotes By Ariel Sharon | Quote Of The Day | Top 100 Quotes

See the events in life of Ariel Sharon in Chronological Order