Advanced Search
The first ever woman to be elected the Prime Minister of Israel, Golda Meir was a person of strong character known for her honest and straightforward ways. An active Zionist she was passionate about everything she became involved in. Prior to being elected as the country’s Prime Minister, she had held various posts under the Israeli government including those of the Minister of Labour and Foreign Minister. A formidable personality, she was called the ‘Iron Lady’ of Israeli politics; she was also called ‘the best man in the government’ by former Prime Minister David Ben-Gurion. She was born in Russia and her family immigrated to the U.S. because of political tensions and dangers in their home country. She displayed leadership qualities from a young age and formed the American Young Sisters Society while still at school. She also became aware about the issues of women’s suffrage, trade unionism, and most importantly, the Zionist movement. She moved to Palestine as a young woman and became actively involved in the country’s politics. She was one of the 24 signatories who signed the Israeli Declaration of Independence which established a separate State of Israel. After decades of dedicated political work she was made the Prime Minister of Israel in 1969, becoming the first woman in her country to reach to that position. Israeli Celebrities
Political Leaders
Israeli Women
Taurus Leaders
Women Leaders
Childhood & Early Life
She was born to Blume Neiditch and Moshe Mabovitch in the Russian Empire. Her father was a carpenter. She had two surviving sisters and several other siblings who died in childhood. She was very close to her sister Sheyna.
Her father went to the U.S. in 1903 to find work. After saving some money he arranged for his family to join him after some years.
Golda attended the Fourth Street Grade School from 1906 to 1912 in Milwaukee, Wisconsin. She was a very capable student who displayed extraordinary leadership qualities for her young age. She graduated as valedictorian of her class.
She went to North Division High School when she was 14 and also worked part time. She was pressurized by her mother to drop out and marry. Not willing to do so, she traveled alone to Denver to live with her sister Sheyna and her husband.
She continued her schooling and graduated in 1915. During this time she also became an active member of Young Poale Zion, The Labor Zionist youth movement.
She trained for a career in teaching at the teachers college Milwaukee State Normal School during 1916-17. 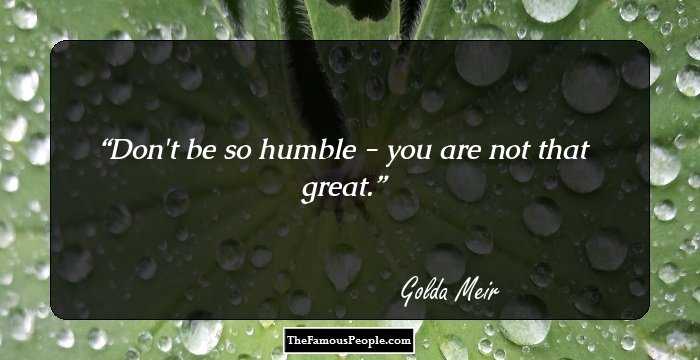 Quotes: You
Continue Reading Below
Career
She began her career as a teacher in Milwaukee public schools by taking up a position at a Yiddish-speaking Folks Schule. During her stint here she became more attracted towards the ideals of Labor Zionism.
She married Morris Meyerson and left her job to join a kibbutz in Palestine in 1921. In the kibbutz her duties included planting trees, picking almonds and running the kitchen. She was a capable woman who managed all her responsibilities well.
She was chosen by the kibbutz as the representative to the Histadrut, the General Federation of Labour. After taking a short break to raise her kids, she returned to the Histadrut in 1928 and was elected the secretary of its Council for Women Workers.
She was leading a very active public life by the 1930s. She joined the Executive Committee of the Histadrut and was soon heading its political department.
The British Government cracked down on the Zionist movement in Palestine in June 1946 which resulted in the arrest of several leaders of the Yishuv. She became the acting head of the Political Department of the Jewish Agency and acted as the main negotiator between Palestinian Jews and the British Mandatory authorities.
She went to the U.S. in 1948 where she raised $50,000,000 from the American Jewish community for purchasing arms for the soon-to-be established State of Israel.
She was among the 24 signatories, who signed the Israeli Declaration of Independence on 14 May, 1948. The very next day the joint armies of Egypt, Syria, Lebanon and Iraq attacked Israel in what would be known as the 1948 Arab-Israeli War. Israel was able to resist the combined Arab attack.
She was made the Israel's minister plenipotentiary to the Soviet Union for the term September 1948-March 1949. She focused on maintaining good relations with the Soviet Union though the relations between the two nations were complicated by Soviet policies against religious and nationalist movements.
Meir was elected as the Minister of Labour in 1949, a post she held till 1956. She initiated welfare state policies and established major residential and infrastructural projects.
Continue Reading Below
The Prime Minister David Ben-Gurion greatly admired the tenacious lady and in 1956 she became the Foreign Minister in his government. She supported building ties with the newly established states in Africa as she believed that Israel could be a role model in nation-building for these new nations.
She was diagnosed with lymphoma in the early 1960s and decided to retire from politics in 1966 owing to health reasons.
In 1969 the Prime Minister Levi Eshkol died suddenly and Meir had to come out of retirement to take over the office. She served as the Prime Minister of Israel from March 1969 to 1974. During this period she held meetings with several world leaders to promote her vision of peace in the Middle East.
A significant happening during her tenure was the Yom Kippur War fought by the joint armies of Arab states led by Egypt and Syria against Israel in October 1973. The Meir government was heavily criticized for failing to have predicting the imminent war and for being ill-prepared. Even though Israel won with American assistance, Meir had lost the trust of the people.
Her party won the December 1973 elections, but she decided not to continue as the Prime Minister. She resigned in April 1974. 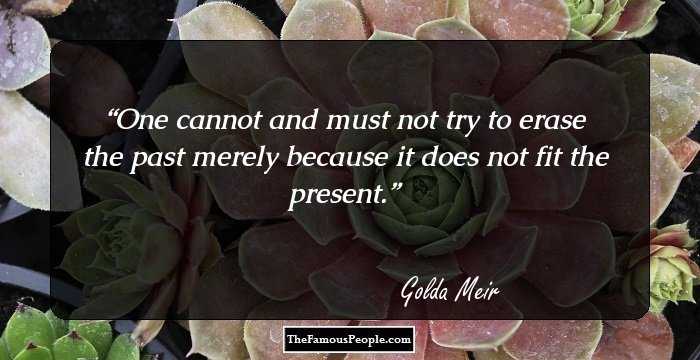 Quotes: Past
Major Works
Golda Meir was a prominent Israeli politician who was elected as the fourth Prime Minister of Israel after serving as the Minister of Labour and Foreign Minister. She was Israel’s first female Prime Minister and was known as the ‘Iron Lady’ for her strong determination and character. She had also signed the Israeli Declaration of Independence on 14 May, 1948 along with 23 other members.
Awards & Achievements
She was presented with the James Madison Award for Distinguished Public Service by the Princeton University's American Whig–Cliosophic Society in 1974.
She was awarded the Israel Prize in 1975 for her special contribution to society and the State of Israel. 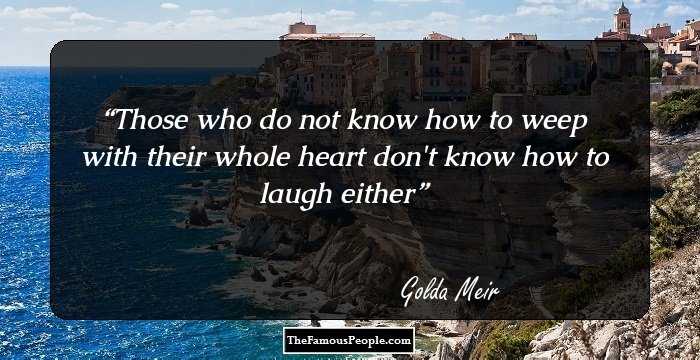 Quotes: Heart
Personal Life & Legacy
She married Morris Meyerson, a sign painter in 1917 and the couple had two children. The marriage however fell apart as Golda became increasingly involved in her political career. The couple never divorced though.
She was diagnosed with lymphoma during the 1960s. She took over the position of the Prime Minister in spite of her failing health. She resigned as the Prime Minister in 1974 and died in 1978 of the disease.
Trivia
The character of this strong woman was portrayed by Anne Bancroft in the Broadway play ‘Golda’ in 1977.
The television movie ‘A Woman Called Golda’ (1982) was based on this Israeli politician.

See the events in life of Golda Meir in Chronological Order