Voted as ‘the 73rd-greatest Israeli of all time’, Moshe Dayan is believed to be one of the greatest generals of all time. He became a respected, heroic figure in the Middle East, as he was the mastermind behind some of the most challenging and impossible of military victories. He served as the Chief of General Staff, Minister of Agriculture, Minister of Defense and Minister of Foreign Affairs in the Israeli government. He joined the illegal, underground Jewish defence force at the age of fourteen and was later sent to prison by the British authorities. He served during the Israeli war of independence and was the commander of the Sinai Campaign against Egypt. During his tenure in the defence ministry, he played a pivotal role in the 'Six-Day War'. He was a man of complex character, sometimes difficult to understand and was known for his mental brilliance. He lost his left eye in battle and wore an eye patch for the rest of his living years. Ironically, Dayan used to get quite depressed with war and also hated the suffering that it brought to mankind. Israeli Celebrities
Israeli Men
Male Leaders
Taurus Leaders
Israeli Leaders
Childhood & Early Life
Moshe Dayan was born on Kibbutz Degania Alef near the shores of Lake Kinneret in Palestine, Ottoman Empire, on May 20, 1915 to the Jewish immigrant couple Shmuel and Devorah. The family later moved to Nahalal, a settlement in northern Israel.
He was educated at the Agricultural School in Nahalal. By the time he was 14, he became a member of the ‘Haganah’, a Jewish army organisation of non-professional recruits. 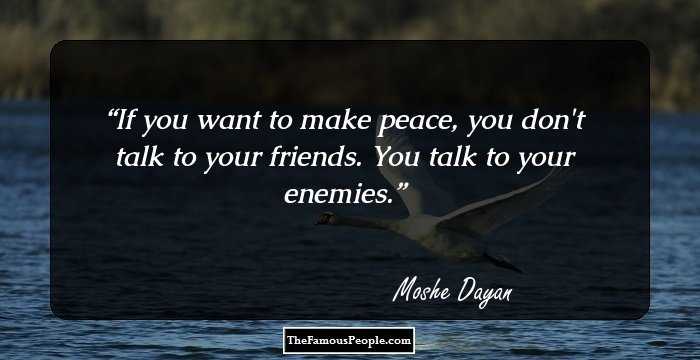 Quotes: You, Friends, Peace
Continue Reading Below
Career
In 1938, he rose to the rank of a motorized patrol commander in the Palestine Supernumerary Police force. He also took part in several Special Night Squads operations.
In 1939, he worked as an instructor for various ‘Haganah’ leaders’ courses that were organised in Yavne'el. During this time the British Palestine Police Officers found many illegal rifles at the venue and asked for immediate evacuation.
The Haganah leaders’ course attendees were arrested by the Transjordan Frontier Force while they were travelling via Wadi Bira, They were sentenced to ten years of imprisonment but were released in 1941.
After release from jail, he was commissioned to work under the task force of an Australian-Palmach-Arab reconnaissance. This force was founded keeping in mind the Allied invasion of Syria and Lebano.
His residence in kibbutz of Hanita was utilised as a forward base and the military unit often penetrated through the Vichy French Lebanon.
In 1941, his forces occupied two bridges across the Litani River, the night before the Syria-Lebanon Campaign. He was subsequently wounded in battle and he lost his left eye.
In 1947, he was commissioned to work on Arab affairs as a member of the Haganah General Staff. They were assigned to recruit agents and access information in Palestine.
In April 1947, he became the head in charge of an abandoned property in Hafia. He took serious efforts to put an end to looting and thus ordered things to be stored in the Haganah warehouses and stock be given to Jewish agricultural settlements.
In May 1947, he was commissioned as the commander of the Jordan Valley sector. After battling for nine hours his troops successfully prevented the advancement of the Syrian forces.
Continue Reading Below
In June 1947, he became the commander of the Israeli mechanized brigade, the 89th Battalion. He commanded troops during the Operation Danny. The following year, he was appointed as the Military Commander of all the Jewish areas in Jerusalem.
In 1949, he received promotion as Major-General and took control of the Southern Command. That year, he also took part in the armistice talks with officers from Jordan at Rhodes.
In 1951, he was trained at the British Army's Senior Officers' School in England, where he had enrolled for a course. The next year, he received a promotion as the Operational Commander of the Northern Command.
In 1952, he rose to the rank of chief of operations at General Headquarters. In this post one of his primary duties was to work on the construction of the canal that was supposed to divert water from the River Jordan.
In 1953, he was elected as the Chief of Staff of the armed forces - this was during a period of severe Arab belligerence. He continued to serve in this post for the next five years.
In 1955, he took office as the Commander-in-Chief of the Israel Defense Forces. The following year, he witnessed one of the biggest highlights of his military career when his forces succeeded in the Sinai Campaign against Egypt.
In 1958, he retired from the active military duty and spent most of his free time as a military adviser and even pursued writing. The next year, he was appointed as the Minister of Agriculture of Israel.
In 1967, he received the honour of becoming the Minister of Defense for Israel. During this tenure, he was the mastermind behind the 'Six-Day War', which resulted in the annexation of Sinai, Gaza Strip, the West Bank of Jordan and the Golan Heights.
After receiving critical comments for not being ready for the Yom Kipper War in 1973, he resigned as the Minister of Defense for Israel the following year. He went into political eclipse for some time.
Continue Reading Below
In 1977, he was appointed as the Foreign Minister of Israel. During this time, he played a pivotal role in negotiating the peace treaty between Egypt and Israel.
In 1979, he retired as the Foreign Minister of Israel. After two years, shortly before his death, he founded the political party named, 'Telem', which won two seats in the elections that year. 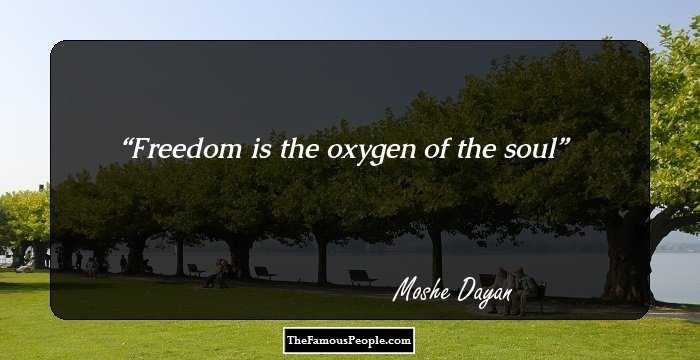 Quotes: Soul
Personal Life & Legacy
In 1935, he married Ruth Schwartz. After 36 years of marriage, his wife divorced him in 1971, due to many extra marital affairs. They have a daughter named Yael Dayan and two sons, Assi Dayan and Ehud Dayan.
He remarried a woman named Rachel in 1973.
From 1980, he suffered from health complication. The same year, he was also diagnosed with colon cancer.
He died on October 16, 1981 after he suffered from a massive heart attack. He was laid to rest in the Nahalal cemetery.
Trivia
In 2005, the eye patch of this Israeli military leader and politician was offered for sale on Ebay for a price of $75,000 U.S. dollars. 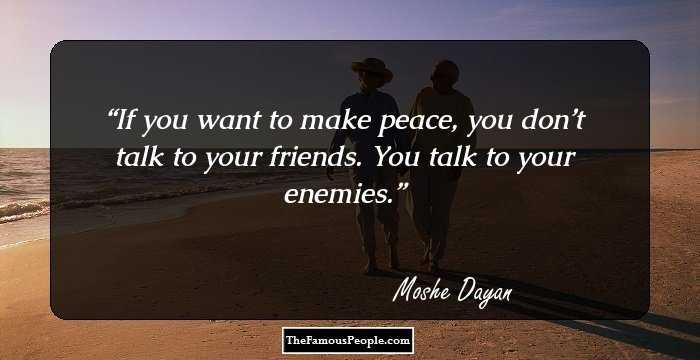 See the events in life of Moshe Dayan in Chronological Order