Abba Eban was an Israeli politician, and diplomat. He was a man of great prominence in Israel’s political scene post World War-II. Though his original name was Aubrey Solomon Meir Eban, he later changed it to Abba Solomon Meir Eban. In a career that spanned several decades, Eban held the portfolios of Deputy Prime Minister, Education Minister, and Foreign Affairs Minister. He also served as Israel’s ambassador to the United States of America, and the United Nations. Eban made quite an impression with his oratory too. According to American diplomat Henry Kissinger, Abba was a great orator who had a really impressive style of speaking the English language. His sentences were often structured in a complex manner, challenging the listener’s intelligence. Eban was also a linguist, who had mastered 10 different languages, and had a good understanding of history. It’s perhaps because of these abilities that he was elected as the Vice President of the United Nations General Assembly, and offered various other diplomatic roles. Eban also authored nine books in a period of forty years.
Continue Reading Below Israeli Celebrities
Political Leaders
Israeli Men
Male Leaders
Aquarius Leaders
Childhood & Early Life
Abba Eban was born in South Africa. He was originally named Aubrey Solomon Meir Eban, which was changed later. Very soon he moved to the United Kingdom along with his parents, where he pursued his education. He also lived in Belfast, Ireland, for a brief period of time.
One of the reasons for Eban’s sharp literary skills was the visits to his grandfather’s house over the weekends, where he learnt Biblical literature and the Hebrew language.
Abba completed his primary education from St Olave’s Grammar School. He later went to the famous Queen’s College, Cambridge, where he studied oriental languages and classics. During his days at the University, he was the editor of a journal called ‘The Young Zionist’. The journal was based on the ideologies of a group called ‘The Federation of Zionist Youth’.
During the period of World War-II, he offered his services to the British Army. He was stationed in Jerusalem as an intelligent officer. His job involved identifying volunteers, and training them in a way that they could strongly resist German invasion.
In the year 1947, Abba Eban translated an Arabic novel written by Tawfiq-Al-Hakim called ‘Maze of Justice: Diary of A Country Prosecutor’. The original was written in the year 1937, 10 years prior to Abba’s contribution towards the same work. 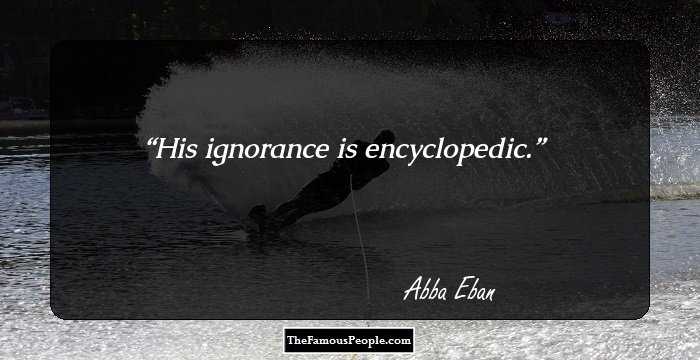 Famous Beautiful Women With Green Eyes
Career
Abba served as a Liaison Officer to the United Nations Special Committee on Palestine, in the year 1947. During his tenure, Eban was successful in getting the ‘Resolution 181’ implemented. This resolution partitioned Palestine into Jewish and Arab segments.
Eban left the United States in the year 1959, after which he returned back to his country Israel. He was elected to the parliament of Israel, also famously known as ‘Knesset’, as a member of the left wing political party called ‘Mapai’
During the period 1960-63, he served as the Minister of Education and Culture, under David Ben-Gurion, who was the first Prime Minister of Israel.
Abba served as the deputy to Prime Minister Levi Eshkol from the year 1963 to 1966. During the span of 7 years, between 1959 and1966, Eban was also elected as the President of the prestigious Weizmann Institute of Science.
Eban also held the position of Israel’s foreign minister from the years 1966 to 1974. It was during this period that the ‘Six Day War’ between Israel and its Egypt occurred.
During the period 1984 to 1988, Eban served as the Chairman of the Israeli Parliament’s Foreign Affairs and Defence Committee. His political career ended after this period due to some internal clashes within the Labour Party. 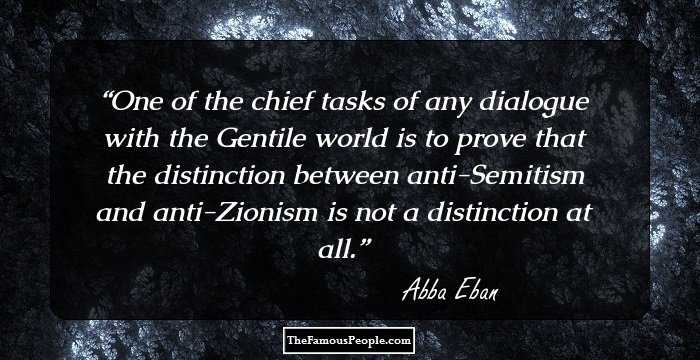 Major Works
Eban had a long relationship with the United Nations. During his tenure in the United Nations General Assembly in 1947, he got the ‘Resolution 181’ passed. He was later elected as the vice president of the assembly in the year 1952.
He served as the Foreign Minister of Israel from the year 1966 till 1974. One of his most eventful experiences during this tenure was to explain his country’s stand on the tense situation between Israel and the neighbouring Egypt.
Abba was also the author of a few books such as: ‘Voice of Israel’ (1957), ‘My People ‘(1969), ‘My Country’ (1972) and ‘Abba Eban: An Autobiography’ (1977). After a really long gap he went on to write ‘Personal Witness’ and ‘Diplomacy For The Next Century’, in the years 1992 and 1998 respectively.
Awards & Achievements
Abba Eban was honoured with the ‘Lifetime Achievement Award’, by the Government of Israel, in the year 2001..
Post his death, an Israel news website ‘Ynet’, conducted a poll in the year 2005, to determine the ‘200 Greatest Israelis of All Time’. Eban stood 52nd on this list. 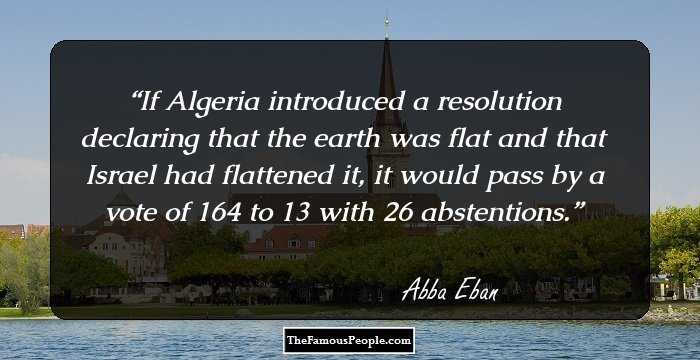 Personal Life & Legacy
In 1945, he married Susan Ambache and had one son and one daughter. His son Eli Eban teaches at the Indiana University and is a well-known clarinettist.
He died in 2002, at the age of 87. He was survived by his wife and two children..
Trivia
Eban was often criticized within Israel’s political circles, for not voicing his opinions about the various issues plaguing the country. However, Eban later became an outspoken person, after the end of his tenure with the cabinet.
Recommended Lists:
Leaders #3157
You May Like

See the events in life of Abba Eban in Chronological Order