Advanced Search
Known as the earliest computer programmer in the world, and that too the first woman to have achieved this feat, Ada Lovelace is known for her mathematical works in collaboration with the "Father of the Computer", Charles Babbage. She was initiated into the profession by her mother, who feared that poetry would spoil the young woman's morals, just as it did for Ada's father, Lord Byron. Though brilliant in the field of mathematics and science, the young girl also harboured a love for poetry, and preferred to blend the seemingly unrelated subjects, in her work. She liked calling herself an "Analyst (& Metaphysician)", working on what could be termed "poetical science", often using poetry to verify her doubts in mathematics. Her initial works with Babbage, earned her fame and recognition, and she was inspired to venture into arenas like phrenology, human emotions, and mesmerism. Since her private life was full of confusion and heartbreak, she made up for her personal shortcomings with her astounding scientific work. Her mathematical writings were much appreciated by eminent people like Michael Faraday. Despite a short life, Lovelace left her mark in the history of mathematics and computers. Read on to explore more about her life and works British People
Mathematicians
British Women
University Of London
Women Scientists
Childhood & Early Life
Augusta Ada Byron was born to English poet, Lord Byron and his wife, Baroness Anne Isabella Milbanke, on December 10, 1815, in London, England. When Ada was only a month old, her parents separated and the young girl never met her father again.
The young girl had a very strict, religious upbringing, forming a close bond with her grandmother, Judith, rather than her own mother, Anne. Anne did not care much about her own daughter, even calling little Ada 'it', and all correspondence with her own mother was to put up a facade of maternal love.
The child was quite frail, and was bedridden for two years after suffering from measles in 1829. It was only after two years, that she was able to move around using crutches.
However, she was a bright student, with a deep interest in mathematics and science. Her imaginative mind was curbed by her mother, who made sure that she did not grow an affinity towards poetry, like her father. According to Anne and her friends, poets always turned out to be immoral.
The young girl was taught by mathematical geniuses like Mary Somerville, Augustus De Morgan, William King and William Frend. 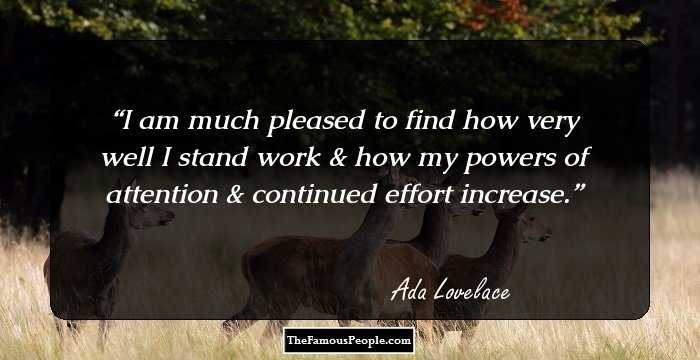 Continue Reading Below
Career
In 1833, Lovelace was introduced to Charles Babbage, also known as the "Father of Computers", by her tutor, Mary Somerville. Since then a professional friendship between the young woman and Babbage ensued, and Ada became interested in the latter's 'Difference Engine.
She also became engrossed in phrenology, which dealt with measuring the human skull, and animal magnetism.
In the year 1840, Babbage's lecture on his invention, the 'Analytical Engine', delivered at the 'University of Turin', was written in French by Italian, Luigi Menabrea. This paper was printed two years later, in the 'Bibliothèque universelle de Genève'.
After the publication, Lovelace took it upon herself to translate Luigi's French paper into English, after a request from Babbage's acquaintance, Charles Wheatstone. The paper was transcribed during 1842-43, and as an addition, the young lady included notes of her own analysis.
Her notes spoke about how the 'Analytical Engine' was more advanced than previous machines that were built for the purpose of calculations. She claimed that Babbage's machine could do more than just numerical computations, and went on to explain its operations in detail.
In her notes, which have been marked from A to G, the last contains an algorithm to make Babbage's machine calculate 'Bernoulli numbers'. For writing the first ever algorithm, Ada is hailed as the pioneer of computer programming.
During this time, Ada also explained the shortcomings in the 'Analytical Engine', and is now considered as a predecessor of debuggers.
In 1844, she ventured on to design a model that would use mathematics to decode the neurological process involved behind the evolution of feelings, calling this "a calculus of the nervous system".
Her inspiration came from the fact that her mother always suggested that Ada was probably insane. She met Andrew Crosse, an engineer, in order to find out how she could use electrical experimentation to devise her model. Her plan wasn't successful, and the model never saw the light of the day.
Continue Reading Below
In 1844, Lovelace also went on to review a research publication on Animal Magnetism, written by Baron Karl von Reichenbach, but her work was never published. 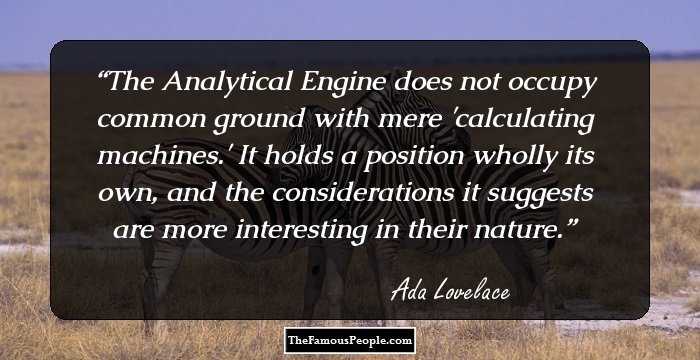 Quotes: Nature
Major Works
Ada Lovelace was a brilliant mathematician, known mainly for the assistance she provided to Charles Babbage on his ‘Differential Engine’ and ‘Analytical Engine’. She wrote the world’s earliest algorithm for the ‘Analytical Engine’, which allowed the machine to calculate 'Bernoulli numbers'.
Personal Life & Legacy
Though kept in a restrictive environment, Lovelace ended up falling in love with one of her teachers in 1833, and even tried running away with him. She was stopped in time, and the affair was hushed up so that it did not become a scandal.
Some of her closest friends were scientists, Charles Babbage, Andrew Crosse, Charles Wheatstone, Michael Faraday, and writer Charles Dickens.
Ada married William King-Noel, 1st Earl of Lovelace, on July 8th, 1835, having been egged on by her mother. The couple had two sons, Byron, Ralph Gordon, and a daughter, Anne Isabella.
Around 1843-44, she met physician William Benjamin Carpenter, and the latter urged her to have an affair with him, which she refused. However, throughout her adult life, she had numerous affairs with men, some of them being quite short-lived.
On November 27, 1852, Ada succumbed to uterine cancer that she had been suffering from for quite some time. Shortly before her death, she was abandoned by her husband, based on a confession that she had made.
She was interred at the Nottingham's 'Church of St. Mary Magdalene', next to her father, Lord Byron's grave, as per her request.
The exceptional mathematician has been depicted in several literary works, including, 'Childe Byron', a play by American playwright, Romulus Linney, and the novels, 'The Difference Engine', and 'Lord Byron's Novel: The Evening Land', penned by William Gibson and John Crowley, respectively.
A computer language, known as 'Ada', has been named after this brilliant mathematician. She is also the eponym of a medal which is presented by the 'British Computer Society'.
University departments, NGOs, and software companies have also been named after her, some of them being the 'Ada Byron Building', belonging to the 'Zaragoza University', the 'Ada Initiative', and 'Adafruit Industries. 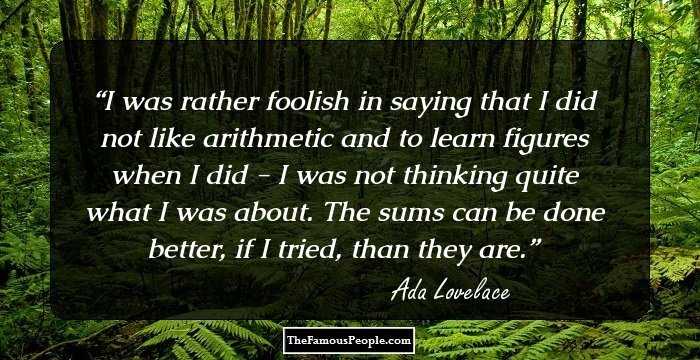 Quotes By Ada Lovelace | Quote Of The Day | Top 100 Quotes

See the events in life of Ada Lovelace in Chronological Order