William James, popularly recognized as ‘Father of American psychology’, started off his journey as a physician and later turned out to become one of the leading and influential philosophers and psychologists of the United States. He is also one of the main persons associated with philosophical school known as pragmatism. He is also cited as one of the founders of functional psychology. With a back up of many theories he proposed, he also explored the areas of religion, morality, metaphysics, human freedom and social philosophy. It was his provocative ideology along with his unique writing style that made his work more impactful. His writings touch a wide array of topics like metaphysics, religion, education, psychology and many more. His influenced great intellectuals such as Edmund Husserl, Bertrand Russell Richard Rorty and the U.S. President Jimmy Carter who could not ignore his philosophical school of thoughts. American Celebrities
Psychologists
American Men
Harvard University
Male Philosophers
Childhood & Early Life
William James was born on January 11, 1842 in Aston House, New York to Henry James, Sr., and Mary Walsh James as their first child.
His father, Henry James Sr., was a Swedenborgian theologian. He was born in a wealthy educated family wherein his father focused on providing quality education to his children.
William James’ early interests in drawing took him to study under an American portraitist, William Morris Hunt (1860) though his love for art did not last long due to his lack of contentment and indecisiveness.
It was only in 1863 that he finally joined the Harvard’s Medical School, before which he studied chemistry and physiology at the Lawrence Scientific School at Harvard University.
The James family made frequent trips to Europe wherein William James became fluent with German and French on account of his trans-Atlantic education.
James had always been inflicted by health issues since childhood. His voluntary participation in the American Civil War in 1861 and scientific expedition to Brazil all had to be given up due to health problems. After perpetual breaks, he finally got his medical degree in 1869 but he did not practice.
Severe health problems and phases of depression took James to France and Germany where he studied with Hermann von Helmholtz and developed interest in psychology. 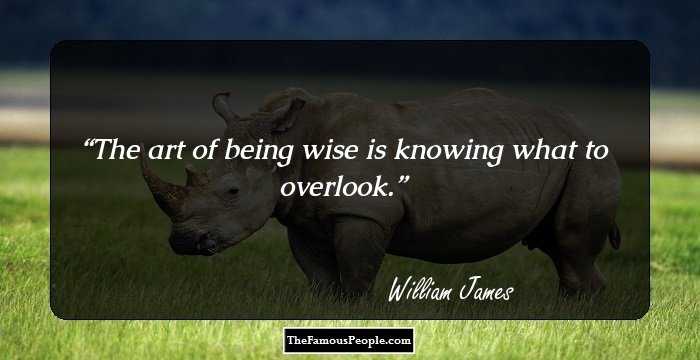 Who Is The Most Popular BTS Member?
Career
After a year of graduating, he was offered a job as an instructor which he accepted and continued to serve for 35 years. By mid 1870s he started teaching psychology.
He is known to have introduced psychology as a subject and also the first one to introduce psychology laboratories in the United States.
In 1872, he started with teaching physiology and continued to move to anatomy and philosophy.
During most part of 1882-1883 James was in Europe visiting laboratories and meeting psychologists to delve deeper in psychological studies and its procedures.
After his resignation from Harvard psychology lab, he drifted his focus towards philosophy.
Gradually, his focus shifted to empirical studies covering topics such as God, immortality and values.
One of the strongest believers of functionalism in psychology and of pragmatism in philosophy, his writings are both quantitative as well as qualitative.
Among his students at Harvard were Theodore Roosevelt, George Santayana, G. Stanley Hall, Ralph Barton Perry, Morris Raphael Cohen, Walter Lippmann, Alain Locke, C. I. Lewis, Mary Whiton Calkins and Gabriel Wells. 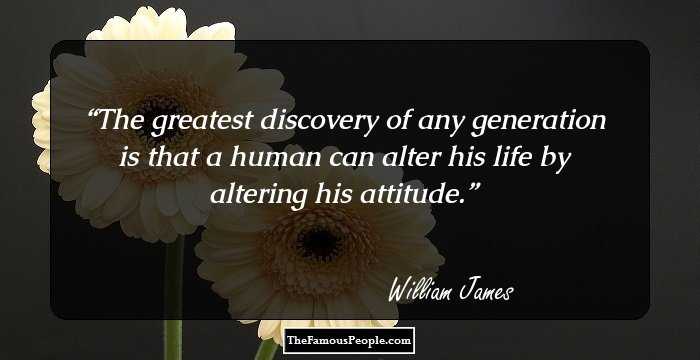 Quotes: Life
Continue Reading Below
Major Works
William James has quite a few masterpieces to his name. They have had major influence on people’s attitude towards the society, mind and body. He wrote intensively in the field of psychology, philosophy and religion alike.
The article, “The Sentiment of Rationality,” was published as his first article in philosophy.
The Will to Believe and Other Essays in Popular Philosophy: the first book on philosophy which is a dedication to Charles Sanders Peirce (1897).
Talks to Teachers on Psychology and to Students on Some of Life’s Ideals (1899).
The Principles of Psychology (1890), a book that took ten long years to complete but touched some great personalities like Bertrand Russell and John Dewey
The Varieties of Religious Experience (1920) are his lectures based on religious experiences and focused on the underlying basis of religious experiences and the various energies that impact the thought process of religionists.
Pragmatism (1907) and A Pluralistic Universe (1909) were his last publication during his lifetime.
In his last years, he was working on a book ‘Some Problems of Philosophy’, which unfortunately could not be completed. His son Henry edited and published it as Memories and Studies.
His Collected Essays and Reviews and The Letters of William James were also framed into two volumes by his son Henry (1920)
Continue Reading Below
He also founded the American Society for Psychical Research.
As per an empirical study by Haggbloom, (on the basis of six criteria such as citations, recognition etc), William James has been ranked as 14th on the list of most eminent psychologists of the 20th century.
Theories by William James
Pragmatism: James is closely linked with the evolution of pragmatic theory according to which there lies no proof behind an idea. The emphasis should always be on utility on the idea and not the truth behind it.
Functionalism: James was against the structural way of analyzing an event. He proposed an event to be one single one which is influenced by the environmental factors.
James-Lange Theory of Emotion: According to James, any event will result in a physiological response which is to be interpreted. Each interpretation is different thus leading to different emotions on a single event. 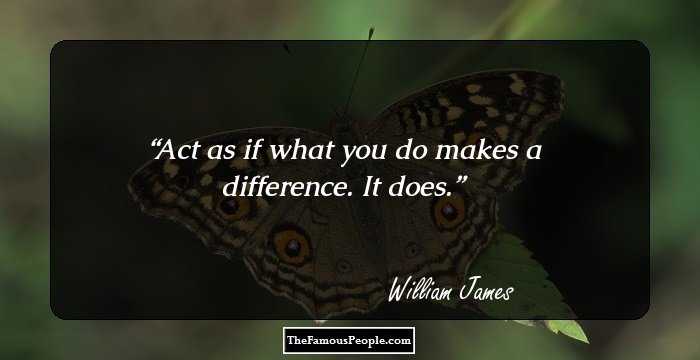 Quotes: You
Personal life & Legacy
Out of his five siblings, two brothers Henry James and Alice James were well-known novelist and the diarist respectively. The other two were a part of the Civil war.
William James married a schoolteacher Alice Howe Gibbens in 1878. He had five children and stayed in Cambridge post marriage. James was broken after losing their son Herman due to whooping cough at the tender age of 2.
In his childhood he suffered from various health issues related to the eyes, back, skin and stomach. He had some serious psychological ailments such as neurasthenia, depression phases which led to suicidal instincts too.
He finally resorted to experimental treatments for his health issues in 1910 but in vain and he passed away on August 26, 1910, in Chocorua, New Hampshire, due to heat failure and cremated at a family plot in Cambridge Cemetery, Cambridge, Massachusetts.
You May Like

Quotes By William James | Quote Of The Day | Top 100 Quotes

See the events in life of William James in Chronological Order