Henry James was an American writer regarded as one of the key figures of 19th-century literary realism. This biography of Henry James provides detailed information about his childhood, life, achievements, works & timeline. 15th April In History
DID WE MISS SOMEONE?
CLICK HERE AND TELL US
WE'LL MAKE SURE
THEY'RE HERE A.S.A.P
Popularity Index
Writers #365
Henry James
Quick Facts 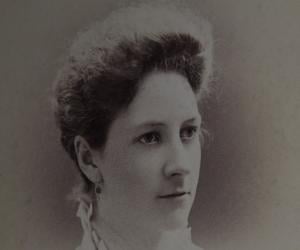 George R. R. Ma...
Henry James was an American writer regarded as one of the key figures of 19th-century literary realism. Having spent several years in Britain, he often used to explore the theme of Americans encountering Europe and Europeans in his writings. Known for his imaginative use of point of view, interior monologue and unreliable narrators, he created highly developed characters in his fiction and explored the themes of personal freedom, feminism, and morality. Born as the son of a lecturer and philosopher, he was exposed to scientific and philosophical influences from an early age. His family also travelled frequently and as a young boy he had been to places like London, Paris, Geneva, Boulogne-sur-Mer and Newport, Rhode Island. On growing up he attended Harvard Law School for a while but dropped out after realizing that he was not meant for a career in law. He began writing and within years found considerable recognition for his thoughtfully written works of fiction. As a writer he drew inspiration from the likes of Honore de Balzac, Henrik Ibsen, Charles Dickens, and Nathaniel Hawthorne whose styles he greatly admired. James also contributed significantly to literary criticism and had been nominated for the Nobel Prize in Literature thrice. Playwrights
Short Story Writers
American Men
Aries Writers
Childhood & Early Life
Henry James was born on 15 April 1843 in New York City, United States, to Mary Walsh and Henry James, Sr. His father, a lecturer and philosopher, was an intelligent man with intellectual interests. Henry had three brothers and one sister.
He was exposed to scientific and philosophical influences from a young age. Accompanied by his family, he travelled widely, visiting London, Paris, Geneva, Boulogne-sur-Mer and Newport, Rhode Island. Henry received his education primarily from tutors and briefly attended a few schools while the family traveled in Europe.
The family returned to New Port in 1860. During this time Henry became friends with painter John La Farge, who introduced him to French literature, especially to the works of Balzac.
He decided to become a lawyer and enrolled at the Harvard Law School when he was 19. However it did not take him long to realize that his true interest lay in literature and not law. Instead of focusing on his studies, he spent his time reading Balzac, Henrik Ibsen, Charles Dickens, and Nathaniel Hawthorne. 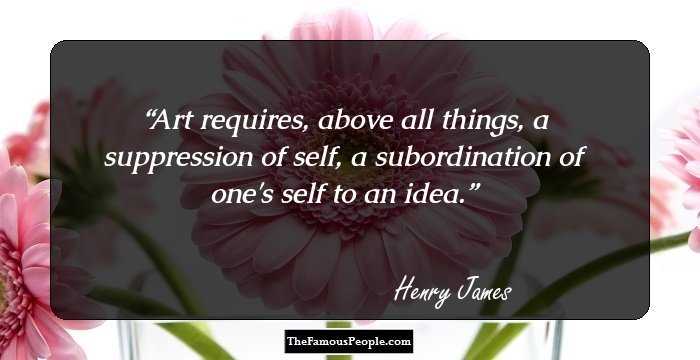 Male Writers
Male Novelists
American Writers
American Novelists
Career
Henry James began his literary career writing articles, book reviews and short stories. His first short story appeared anonymously in the ‘New York Continental Monthly’ and his first book reviews in the ‘North American Review’ when he was in his early twenties.
Soon he established himself as one of the most skillful writers of short stories in America. He then left America and lived for a time in Paris, France before moving to London, England in 1876. He continued his prolific writing, publishing literary pieces such as ‘The American’ (1877), ‘The Europeans’ (1878), a revision of ‘Watch and Ward’ (1878), ‘French Poets and Novelists’ (1878), and ‘Hawthorne’ (1879).
In 1881, he published his novel ‘The Portrait of a Lady’, which was first published as a serial in ‘The Atlantic Monthly’ and ‘Macmillan's Magazine’. The plot revolves around a spirited young American woman, Isabel Archer who inherits a large amount of money and subsequently becomes the victim of scheming by two American expatriates. It is regarded by critics as one of his finest works.
He wrote two novels on social reformers and revolutionaries in the 1880s. ‘The Bostonians’ (1886) is a bittersweet tragicomedy dealing with political activists and the feminist movement while ‘The Princess Casamassima’, also published in 1886, is the story of a bookbinder who becomes involved in radical politics and a terrorist assassination plot.
James was also a noted literary critic and a playwright. In 1891 he converted his novel ‘The American’ into a play which enjoyed moderate success. He also wrote several other plays, most of which went unproduced. He could not achieve much success as a playwright and this fact greatly disappointed him even though he was a famed novelist.
His career reached its peak at the beginning of the 20th century. In 1902, he published the novel ‘The Wings of the Dove’ which is about the story of Milly Theale, an American heiress stricken with a serious disease. The book was followed by ‘The Ambassadors’ (1903), and ‘The Golden Bowl’ (1904). All the three of these novels received intense critical study. 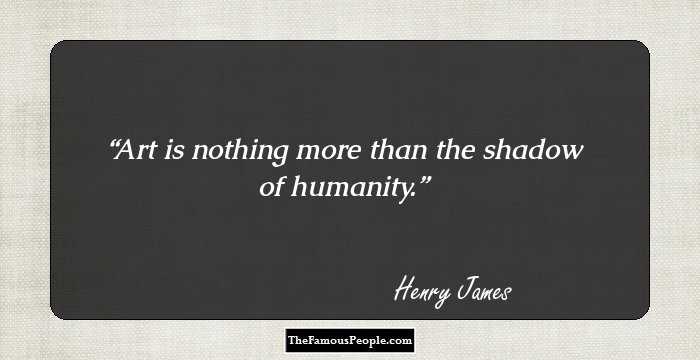 American Playwrights
American Short Story Writers
Aries Men
Major Works
His novel, ‘The American’, originally published as a serial in ‘The Atlantic Monthly’ focused on the adventures and misadventures of Christopher Newman, an American businessman on his first tour of Europe. The novel was also made into a successful play.
Henry James’ best known work is ‘The Portrait of a Lady’, the story of a spirited young American woman, Isabel Archer who inherits a large amount of money and falls victim to two scheming American expatriates. The novel explores themes of personal freedom, responsibility, and betrayal.
Another one of his most popular works is ‘Daisy Miller’, a novella which portrays the courtship of the beautiful American girl Daisy Miller by Winterbourne, a sophisticated man. The work which serves as a psychological description of the mind of a young woman contains many symbolisms and allegories.
Awards & Achievements
Thrice during his career Henry James was nominated for the Nobel Prize in Literature (1911, 1912, and 1916).
He was awarded the Order of Merit in 1916. 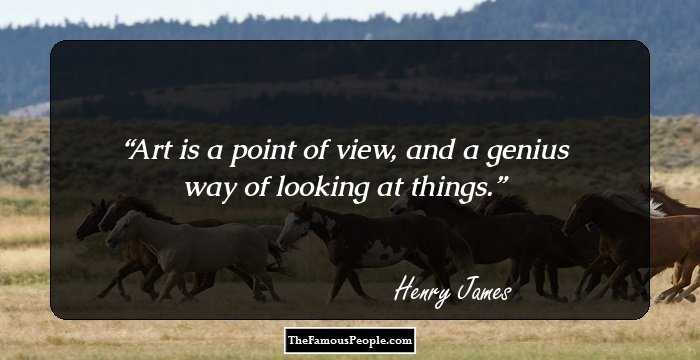 Quotes: Art
Personal Life & Legacy
Henry James never married. Some sources state that he was once in love with his cousin Mary Temple who died from tuberculosis. Historians also debate on the probability of James being homosexual.
After living in Britain for several years, he became a naturalized English citizen in 1915. He died on 28 February, 1916, in Chelsea, London.
You May Like

Quotes By Henry James | Quote Of The Day | Top 100 Quotes

See the events in life of Henry James in Chronological Order