(American Writer Best Known for His Work 'The Story of Civilization')

Will Durant was an American writer, historian and philosopher, best known for his work ‘The Story of Civilization’, written in collaboration with his wife. After completing his graduation, he started out as a reporter and then worked as a teacher for several years to earn a living but after falling in love with one of his students in school, his life dramatically changed. After they fell in love and got married, he quit teaching and shifted his focus to the philosophical views surrounding the society. Subsequently, he became widely known for his second book, ‘The Story of Philosophy’, which established him as an acclaimed writer. The book sold more than two million copies over a period of three decades and was translated into several languages. But his masterpiece which redefined historical literature, ‘The Story of Civilization’ arrived in the 1930s. It covered the living conditions of everyday people throughout the 2500 years of the West. He collaborated with his wife to produce the volumes and presented an insightful description of life through the ages. He also fought for equal wages, women's suffrage and fairer working conditions for the American labor force in his lifetime. He not only wrote on many topics but also put his ideas into effect and is remembered as an extraordinarily talented creative genius. Noam Chomsky
DID WE MISS SOMEONE?
CLICK HERE AND TELL US
WE'LL MAKE SURE
THEY'RE HERE A.S.A.P
Quick Facts

Quotes By Will Durant Historians

American Celebrities
Philosophers
Non-Fiction Writers
American Men
Columbia University
Childhood & Early Life
He was born on November 5, 1885, in North Adams, Massachusetts, to Joseph Durant and Mary Allard. His parents were of French-Canadian origin and had been a part of the Quebec emigration to the United States.
In 1900, he received education from Jesuits from the St. Peter's Preparatory School and later attended the Saint Peter's College in Jersey City, New Jersey. He completed his graduation in 1907. 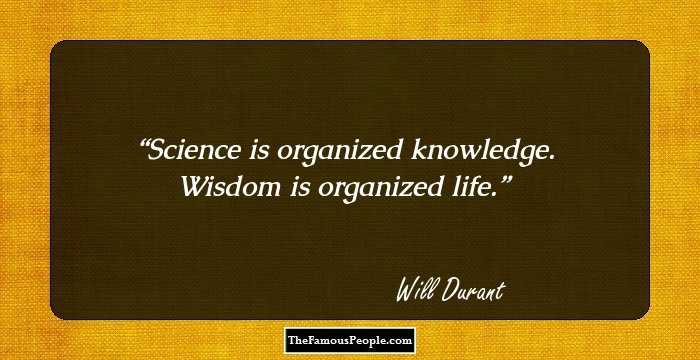 Quotes: Life
Continue Reading Below
Career
After graduation, he became a reporter and wrote several articles on sexual criminals for Arthur Brisbane's ‘New York Evening Journal’.
In 1907, he was appointed a teacher of Latin, French, English and geometry at Seton Hall University, South Orange, New Jersey.
In 1911, he became the principal of Ferrer Modern School where he also served as the teacher. There he fell in love with one of his students, a girl 13 years younger than him, and later married her. In 1913, he resigned from the post and began lecturing in a Presbyterian church for a few dollars to support his family.
In 1917, he published his first book titled ‘Philosophy and the Social Problem’ while working as an instructor at the Columbia University. It discussed the idea that philosophy had not grown because it avoided the actual problems of society.
In 1926, he published ‘The Story of Philosophy’ which eventually became a bestseller and the couple was finally able to gain financial stability.
In the subsequent years, he published ‘Transition’ (1927), ‘The Mansions of Philosophy’ (1929), ‘The Case for India’ (1930) and the ‘Adventures in Genius’ (1931).
In 1935, he started his most acclaimed work, titled, ‘The Story of Civilization’ which consisted of 11 volumes which were published over four decades.
He also published some other literary works during this time including ‘The Lessons of History’ (1968) and ‘Interpretations of Life’ (1970).
In 1977, he published ‘A Dual Autobiography’, which highlights his life and times with Ariel Durant. It describes their remarkable love story and their work life together. His wife Ariel is credited with contributing significantly to his books throughout life.
Continue Reading Below
Several of his works have been published posthumously over the years such as ‘Heroes of History: A Brief History of Civilization from Ancient Times to the Dawn of the Modern Age’ (2001),‘The Greatest Minds and Ideas of All Time’ (2002), ‘An Invitation to Philosophy: Essays and Talks on the Love of Wisdom’ (2003) and ‘Adventures in Philosophy’ (2008). 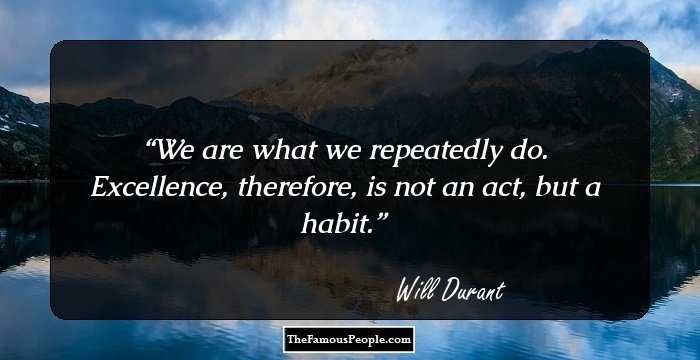 Major Works
His most significant contribution is ‘The Story of Civilization’, written in collaboration with his wife. It is regarded as the most successful historiographical series in history. It is an 11 volume set of books covering Western history and was written over a span of four decades. Some of its volumes are ‘Our Oriental Heritage’ (1935),‘The Age of Faith’ (1950), ‘The Renaissance’ (1953),‘The Age of Reason Begins’ (1961),‘The Age of Voltaire’ (1965) and ‘The Age of Napoleon’ (1975).
Awards & Achievements
In 1968, he, along with his wife, received the ‘Pulitzer Prize for General Nonfiction’ for ‘Rousseau and Revolution’, the tenth volume of ‘The Story of Civilization.’
In 1977, the Durant couple was honored with the ‘Presidential Medal of Freedom’, one of the highest awards granted by the United States government to civilians. 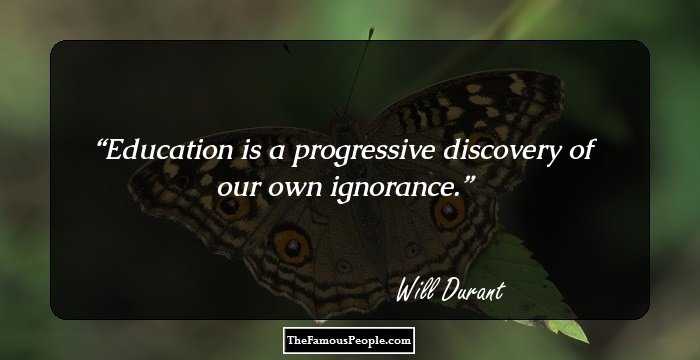 Personal Life & Legacy
He met his future wife, Chaya (Ida) Kaufman, at the Ferrer Modern School in New York City, where he served as the principal as well as a teacher and Ida was one of his students.
They fell in love and later got married on October 31, 1913. Ida was only 15 years old at the time of their marriage and he later nicknamed her ‘Ariel’. They were blessed with a daughter, Ethel and later adopted a son, Louis.
He died on November 7, 1981 in Los Angeles, California, upon hearing the news of his wife’s death, who had died two weeks earlier. The couple was buried at the Westwood Village Memorial Park Cemetery in Los Angeles, California.
Recommended Lists:
Writers #1240
Intellectuals & Academics #413

Quotes By Will Durant | Quote Of The Day | Top 100 Quotes

See the events in life of Will Durant in Chronological Order